A brief history of a grand rodeo in a small town 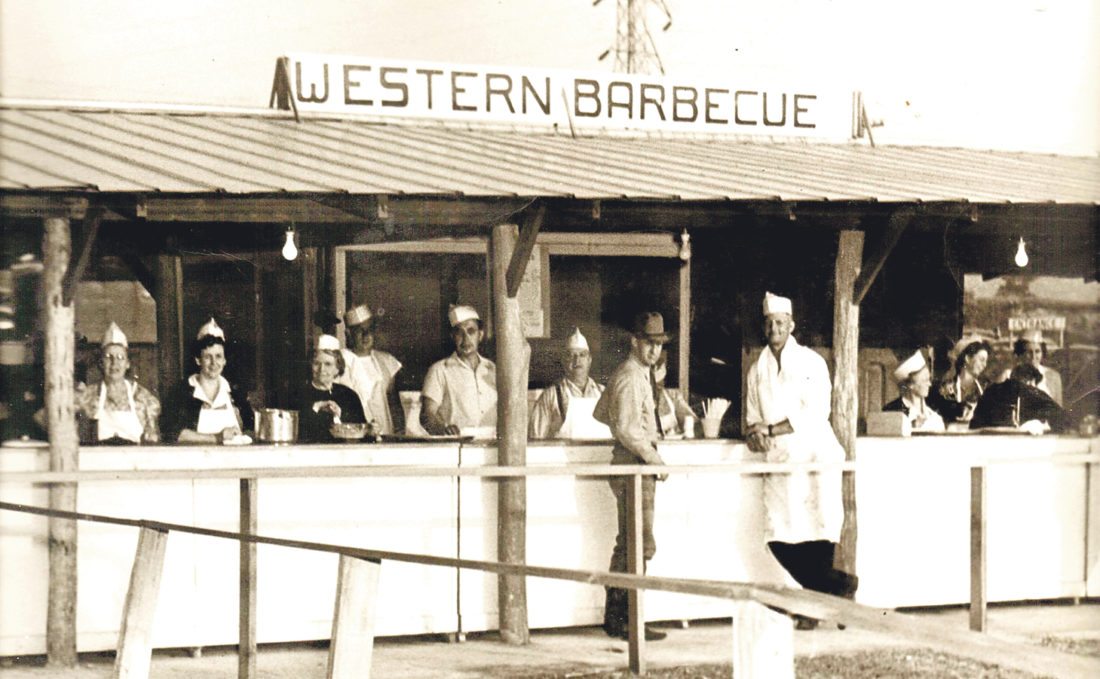 Submitted Photo This photo, from the 6th annual Gerry Rodeo in 1951 shows that the times may have changed, but the tradition rodeo barbeque dinners still carries on.

Many thought that the idea of a rodeo wouldn’t succeed for even one year, but they were certainly wrong, for when Aug. 2 rolls around this summer, the tiny hamlet of Gerry just North of Jamestown, will celebrate the opening night of its 73rd consecutive annual rodeo, the longest running PRCA rodeo east of the Mississippi.

For four days, this quiet little village becomes “The Rodeo Capital of the East” as approximately 200 professional cowboys and cowgirls roll into town and pay their entry fees to compete for more than $45,000 in prize money in five performances.

The event, sponsored by the Gerry Volunteer Fire Department, got its start in 1945 when a former working cowboy named Jack Cox moved from the West to Gerry and suggested a rodeo as a way of raising money for the newly formed fire department. In spite of the doubters, his dream became a reality. Members of the department and other volunteers in 70 days turned four acres of swamp land into an arena and parking lot in time for the arrival of the renowned Colonel Jim Eskew and the livestock that first year. Bleachers were borrowed from area schools and portable lights were rented.

In those early days the stock arrived by train in the middle of the hamlet, traffic was stopped, and the animals were herded down the middle of Route 60 to the rodeo grounds by volunteers that made for some exciting moments.

Today the stock arrives by modern semi trucks, but the excitement of rodeo time still fills the air. Several hundred volunteers of all ages pitch in to make the event possible each year; filling jobs from painting fences to serving the famous beef barbeque dinners. Many residents take their vacation just to volunteer, and others who have moved away return to help.

The Gerry Fire Department felt from the beginning that their rodeo should be “top-notch”, so they have always contracted for a rodeo sanctioned by the Professional Rodeo Cowboys’ Association (PRCA). Participants pay an entry fee and points earned in Gerry count toward qualification to the annual National Finals Rodeo in Las Vegas in December.

The contractor for this year’s event will again be Painted Pony Championship Rodeo of Lake Luzerne, NY, owned by the husband and wife team of Shawn and Shana Graham, who will be bringing more than 100 head of stock for the competition. They have been producing rodeos for more than ten years at their home location in Lake Luzerne as well as sponsoring rodeos across the Northeast. Both of them have previously participated as contestants in Gerry and are excited about returning as the contractors for this event.

Over the years constant improvements have been made to the rodeo facilities. Additional land has been acquired; permanent bleachers have been installed in an arena seating 4000; new lighting turns night to day; and the old dining hall has just been enlarged, refurbished and air-conditioned to accommodate the hundreds who come each year just to enjoy the world-famous beef barbeque dinners.

Over a thousand pounds of beef is cooked daily in pits over wood fires outside the dining hall. The wood must be one-year-old maple in order to create the proper cooking standards. Perhaps one of the best kept secrets is the recipe for the homemade barbeque sauce. The dinners also feature everyone’s favorite: crisp browned potatoes done outdoors in large iron kettles. The dinners also include gravy, corn, tossed salad, cottage cheese, ice cream and a beverage.

The midway houses have more than 20 booths offering everything from cotton candy to Western wear. The rodeo has always been promoted as family entertainment and is therefore alcohol free.

Also there will be a return of a free kids’ rodeo at 4:00 p.m. on Saturday afternoon, Aug. 5, where kids from ages 3-8 can compete in the arena in rodeo related games supervised by pro rodeo cowboys and cowgirls.

Over the years the profits from the rodeos have enabled the Fire Department to purchase modern fire and rescue equipment for the protection of the residents of the town. Today the Department has two pumpers, two tankers, a utility truck, an ATV with trailer and a recently purchased state-of-the-art ambulance to respond to more than 350 calls per year.

This year’s rodeo runs Aug. 2 through Aug. 5 with nightly performances at 8:00 p.m., Wednesday through Saturday in the arena located five miles North of Jamestown on Route 60. Barbeque dinners are served each evening at 5:00 p.m. Additional information is available by phone at 985-4847 or 1-888-985-4847 or on-line at www.gerryrodeo.org. The website for information about Painted Pony Championship Rodeo is www.paintedponyrodeo.com.

All of the charter members who planned the first rodeo are gone, but the dream that began 73 years ago is still alive and well, proving what can be accomplished when neighbors have a common goal and work together to meet that goal. Following the last performance on Aug. 6, the rodeo grounds will empty out within hours as the stock will be loaded onto semis. The contestants will pack their gear and move on down the road to their next rodeo, and the residents of Gerry will begin the cleanup process after a long, tiring week. But as they go back to their normal routines on Monday, they look back with pride on the accomplishments of their little town and begin planning for next year’s rodeo.