Running off to states! 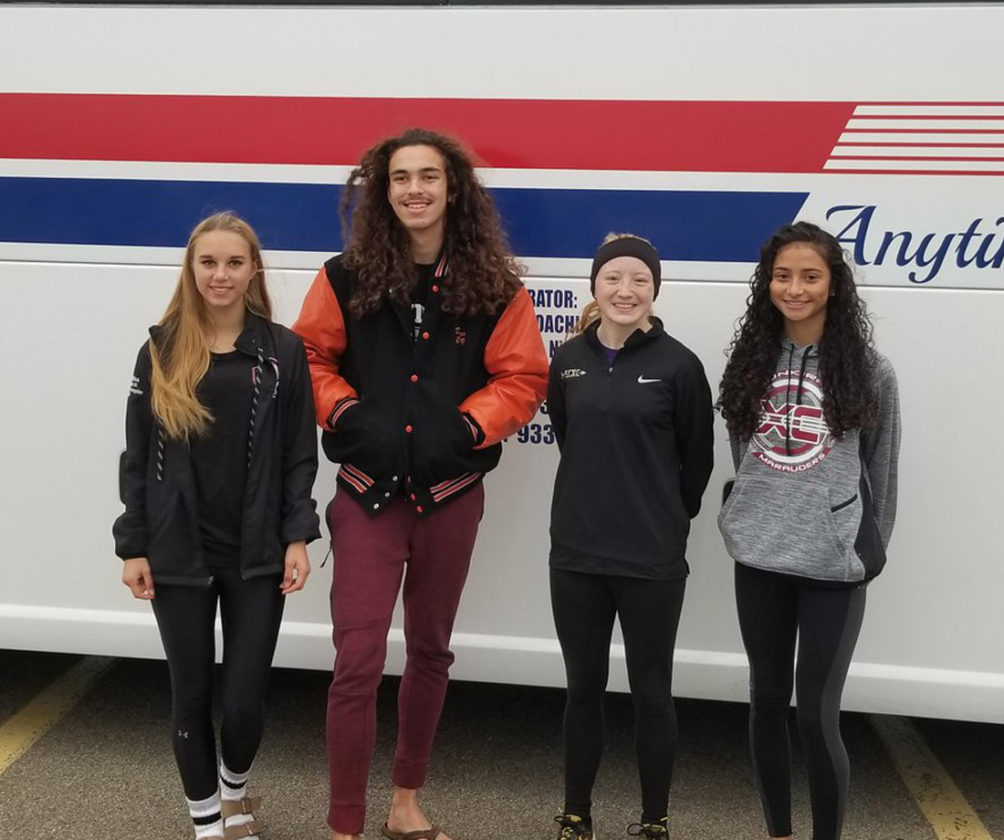 Submitted Photo Pictured above, from left to right, are Fredonia’s Emily Brown and Diego Rey, Silver Creek’s Ellie Decker and Dunkirk’s Jericha Petrella, who are all set to race at the state championships in Kings Park on Saturday.

KINGS PARK — The New York State Public High School Athletic Association cross country state championships will take place at Sunken Meadow State Park on Long Island on Saturday, and with it, four local runners will be making the trip to run the race.

Those runners will be Fredonia’s Emily Brown and Diego Rey, Silver Creek’s Ellie Decker and Dunkirk’s Jericha Petrella, each of which who qualified for the state meet last week after their placings during the sectional championships held in Bemus Point.

Now that the ticket to states has been punched, the runners are eagerly awaiting that initial gun to go off to face their next challenge.

“I’ve heard this is one of the most difficult courses in the state,” said Dunkirk coach Adam Woelfle. “I know hills are a big factor. It’s going to be different because you’re going to see kids you don’t know. Jericha will have to pace herself off of other kids she knows she can run with.”

The state race bounces around from year to year, so it’s hard for runners to gain any familiarity with the course.

“As runners, you really have no idea of the competition and many of them don’t know very much of the course,” said Silver Creek coach Mike Janisch. “Other than what you can see on youtube and the course maps, but it’s still going to be different than a regular county meet.”

“It’s something they’ve been working towards for a long time,” said Fredonia coach Carol Zirkle.

Even so, this situation is going to be familiar for Fredonia’s Brown and Rey, each of them are coming back to the state race after qualifying in years past. Brown has been to the state meet three times including today, while Rey has made this year his second trip.

“The second mile is very challenge because of the hill,” said Zirkle. “You have to be careful not to go too hard on the first flat stretch. The terrain is the biggest thing you have to worry about. You have to know how to run a race with a challenging hill. You have to run your strategy while not getting ahead of yourself.”

Brown said last week after her second place finish in the sectional championships that she wasn’t in the position she wanted to be in, but for this race, there’s no looking back. Brown comes into the race as the 17th best female runner in the Class C as ranked by tullyrunners.com

As for Rey, he’s coming off a fourth place finish in Class C last week, but knows that the competition is going to be even another step up from what it was last week. Rey comes into the race as the 26th ranked male runner in the Class C.

On the flip side from the Fredonia runners who have had that experience running at the state meet, Silver Creek’s Ellie Decker will make her first trip to the meet after the team narrowly missed a shot to go together at last week’s meet when they came just short of Newfane.

“She seems pretty much within herself,” said Janisch. “She’s had a good week of practice and seems ready to go.”

Decker will be the 27th ranked female runner in the Class C. Janisch said that while a top 30 finish is definitely a goal, he thinks Decker can finish top 20, depending how the race goes.

“She expects a lot out of herself,” said Janisch about Decker. “She’s a very well rounded young lady, but she has high expectations.”

Also flying under the radar is Dunkirk’s Jericha Petrella, who squeezed her way into her first state meet by finishing ninth overall in last week’s Class B sectional race. Petrella is ranked 124th in the Class B.

“I think she wants to enjoy it,” said Woelfle. “She pushed really hard to make it here and she came on really strong at the end of the season.”

With all the hype surrounding the runners as they head to states, some level of achievement should set in and be held on too by the athletes, as they have worked so hard to get to this point in the season.

“I would like [Ellie] to come away with the idea that she can achieve anything and run with anyone,” said Janisch. “She has done so much to make herself into a good runner that it’s quite a compliment to her.”

“I just want [Jericha] to prove that she can do it,” said Woelfle. “She’s more of a sprinter, but I just want her to have a good finish and run a good race.”

“My goal for [Diego and Emily] is to walk away happy with their race,” said Zirkle. “They’ve trained so hard and as much as that place matters — it’s whether or not you feel good about your race. You can only control your own race.”