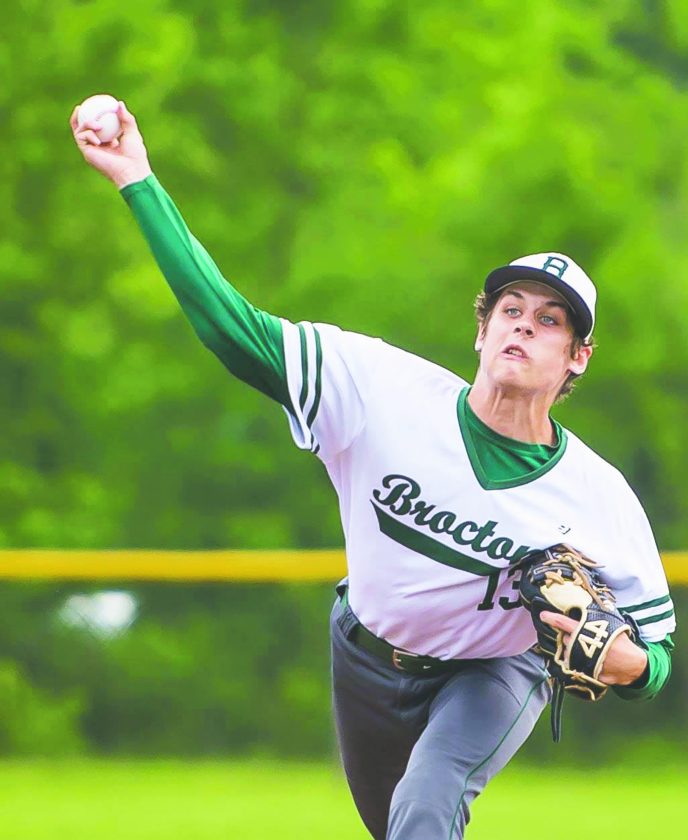 OBSERVER Photo by Ron Szot Brocton’s Jordan Krystofiak delivers a pitch during a playoff game in Brocton earlier this year.

BATAVIA — As the Brocton Fire Department sends the Brocton Bulldogs baseball team off with well wishes to Batavia this morning, many of the boys on the bus will have a familiar feeling. This group, one of the most accomplished teams in Brocton baseball program history, knows that today is little more than a business trip, with much more extravagant goals in mind for a week from now.

Today, the Brocton Bulldogs fight for another trip to Binghamton. In their second straight Far West Regional game, Brocton heads to Dwyer Stadium to face Section V champion Honeoye at 11 a.m. this morning. With a win today, Brocton would punch its ticket to the State Final Four in Binghamton next week. After never reaching the Final Four before last year, Brocton is looking to make a return appearance.

“The team I have is confident. We’ve been preparing for this,” said Brocton head coach Rob Fetterick.

Another group of Bulldogs, the Section V champion Honeoye Bulldogs, hope to end the Brocton magic a win shy of that final stage.

After a down regular season by Brocton’s standards after an undefeated league year a season ago, it appears that Brocton is hitting its stride at the right time. In last weekend’s Section VI, Class D title game against Clymer/Sherman in Jamestown, Brocton (8-7, 6-2) played flawless defense and All-State pitcher Ronald “Bubba” Brown threw a gem. Despite only five hits and one run offensively, Brocton came away with the win. 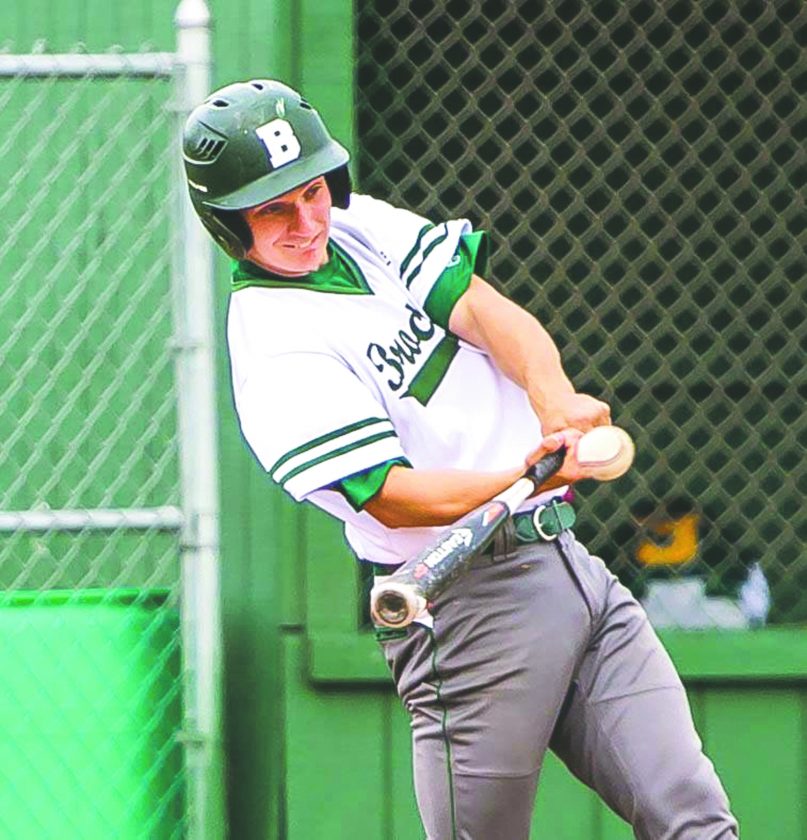 To come out on top today against Honeoye (23-1), Brocton will likely need to do much of the same defensively and will need another gem from Brown — who will almost certainly get the call on the mound. Still, Brocton knows five hits might not be enough today, especially against a Sectional champion like Honeoye, with an average of over 10 runs per game on the year. Honeoye has scored 240 runs in 24 games, with just 56 runs allowed all season. In nearly half of the team’s games this year, Honeoye scored 10 runs or more.

“I know they’ve played 20-plus games. They must not have had the rain we did,” joked Fetterick. “What I don’t know is their level of competition.”

Despite a tendency of blowing opponents out, Honeoye came away with a pair of nail-biters to earn a spot in today’s game. Honeoye defeated Notre Dame by a score of 8-7 in 10 innings in the Section VI final, then beat Avoca 6-5 on Tuesday in the Class D crossover to earn a spot in today’s game after scoring four runs in the sixth inning to pull ahead. Honeoye comes in with three seniors hitting over .400 on the year, Tyler Rudolph, Brett Higley and Clay Allison.

“They come from behind to win. Their seniors are their leaders and the seniors that are there are hungry,” said Fetterick, noting that Honeoye fell to Avoca last season — Brocton’s Far West Regional opponent a year ago.

Brocton, however, comes in fully rested with the experience of last year’s trip to the State Final Four. Six players from last season’s starting lineup in the State Final Four — Brown, Derrick Burns, Jordan Krystofiak, Riley Rivera, Caleb Chelton and Gabe Morello — return to the Far West Regional stage this morning as likely starters. Newcomers to the starting lineup like Darien Booker and Michael Steward helped the team reach this stage with stellar defensive plays in the Sectional title game last weekend, plus Krystofiak’s stellar pitching performance in the Sectional semifinal against North Collins allowed Brocton to rest Brown for the title game. 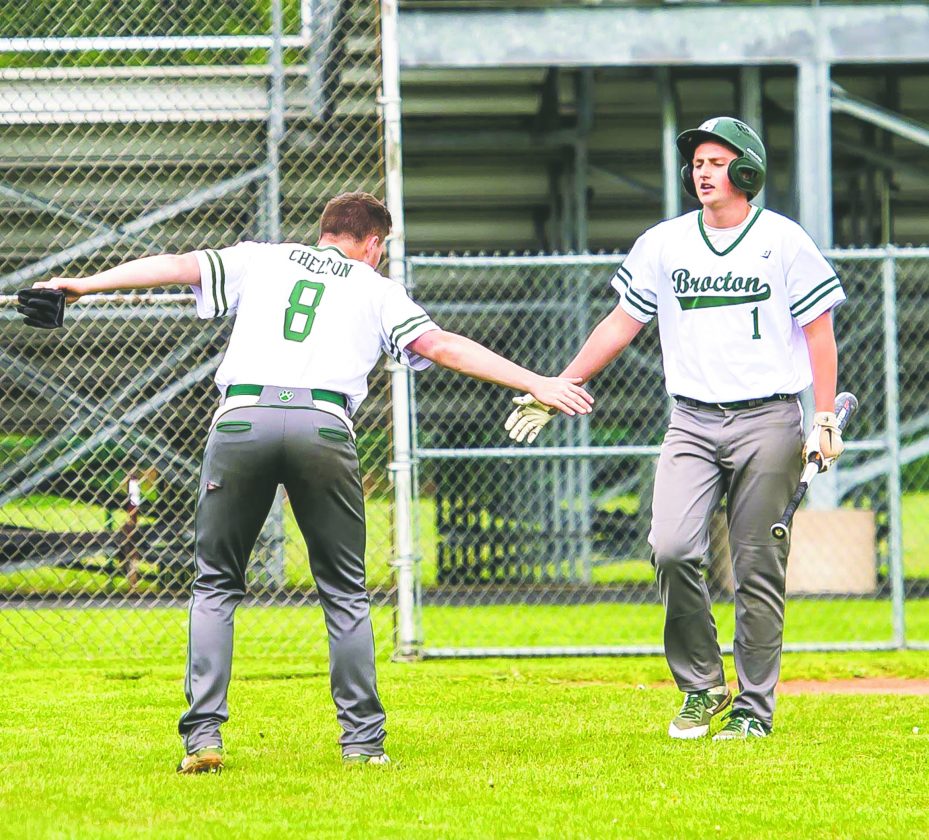 “These kids are leaders,” said Fetterick. “They’re a tight group. They’re family-oriented. They’re friends playing the game they love and they feed off each other. When one of them does something big, the next one follows, and the hits are contagious.”

After what Brocton did last season to get to the big stage, the 2018 Bulldogs managed just one hit in the State semifinals. A big reason for those struggles may be the pressure of trying to do too much.

“We need to be loose. We need to relax,” said Fetterick. “I think last week was nerves. We played a little tight and we tried to do too much. … We need to breathe at the plate and trust our abilities.”

Brocton hopes that the experience from a year prior, paired with one simple message of sticking together as a team, will lead the Bulldogs to another State Final Four appearance.

“Our most important thing is staying together. That’s what we’ve been saying all year,” said Fetterick. “They just need to have fun playing the game they love.”

For live coverage of today’s game, follow along on Twitter @bradencarmen and @TheObserverNY. Look for complete game coverage in Sunday’s OBSERVER. 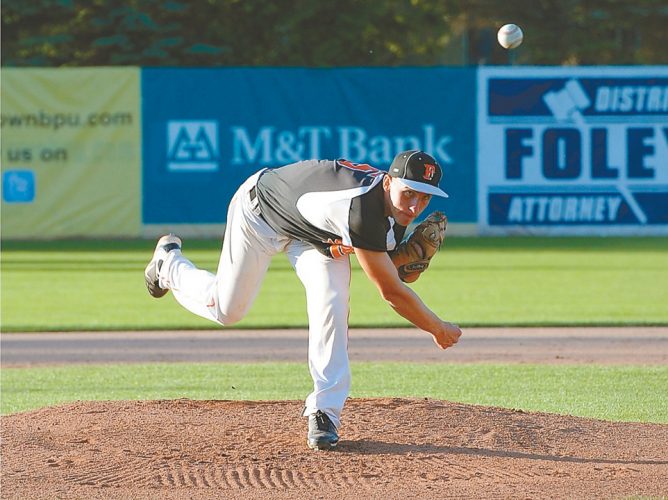