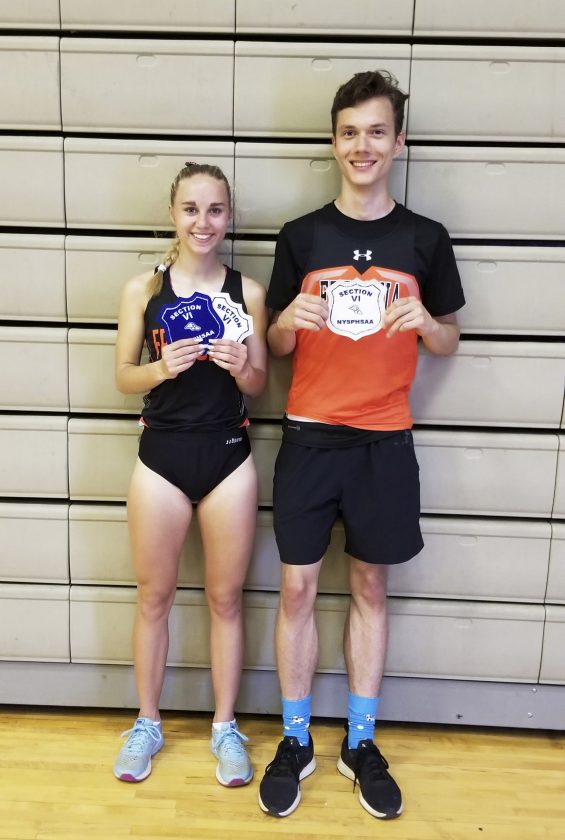 Submitted Photo Fredonia’s Emily Brown, left, and Oliver Madariaga each received Section VI patches for their performances at the Section VI championships this weekend. Brown qualified for States in the steeplechase.

WILLIAMSVILLE — Dunkirk’s Jericha Petrella and Fredonia’s Emily Brown have been known all year throughout all three running sports seasons as some of the best in New York State. In the Section VI Championship track and field meet at Williamsville South High School this weekend, both local standouts came out on top to earn spots in the State Championships next weekend.

In the girls 400m dash, Petrella came in as the top seed and proved why she had been there all year, running a 57.88 to take first place at the event. She crushed her previous personal best and set a new school record. The previous record had been held by Justina Barone with a 58.68 from 1999.

“All year she had been in control of the race by 100m in, but this time she was challenged on the outside for about 200m, which just drove her,” said Dunkirk coach Adam Woelfle. “She knew it was her race to lose, and she wasn’t going the let that happen. She didn’t even realize the time she had run until I pointed to the board and made her look.”

According to all available records at Dunkirk, Saturday’s performance makes Petrella Dunkirk’s first runner to make it to States in all three sports seasons in one year — in cross country, indoor track, and track and field. 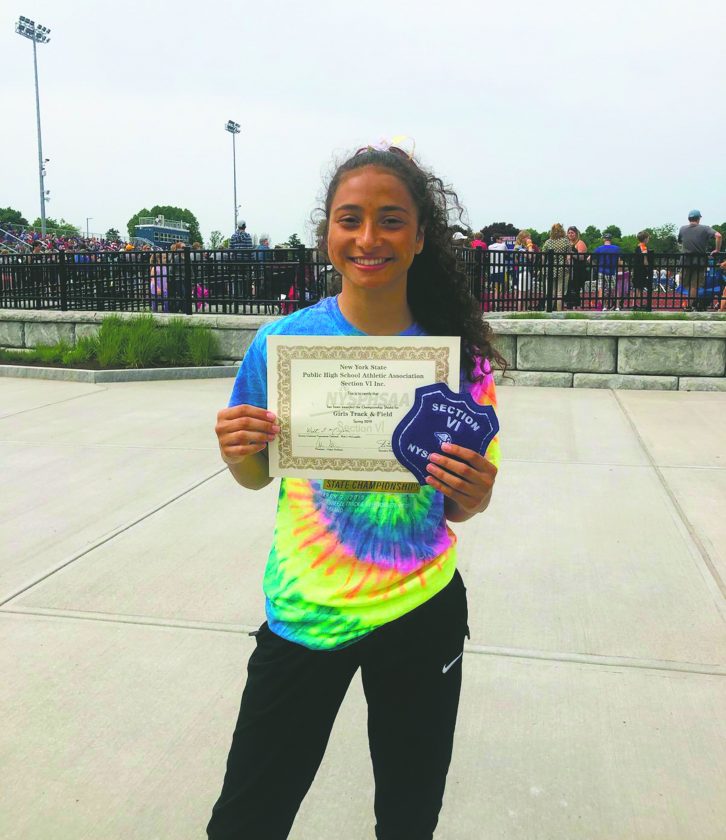 Submitted Photo Dunkirk’s Jericha Petrella earned a Section VI patch for winning the 400m dash, with a time of 57.88. That set a new school record, previously set by Justina Barone in 1999. Petrella qualified for States.

“I’m so proud of her and that moment,” said Woelfle.

Also for Dunkirk, the 4x100m relay team of Jonah Rosas, Miracle Berakah, Nelson Rosario and Devin Eddy ran a season best of 44.62, good for fifth place. Matt Hanlon, Rosario, Anthony Ruiz and Berakah finished ninth in the 4x400m relay, while Berakah took eighth in the 400m and Rosas took eighth in the 200m. Eddy competed in the long jump and Ruiz ran the 3,000m steeplechase, on an emotional day for many Dunkirk seniors in their last varsity event.

“It was tough to see all those boys leave without any patches, but I know they gave it their all this season,” said Woelfle. “Besides Berakah, the rest of them have been together all four years, with most of them running all three seasons a year. It’s going to be a tough group to lose, and seeing them come off the track one last time really hit hard.”

On the girls side for Dunkirk, the 4x400m relay team of Octavia Porter, Siera Jacques, Jessica Vasquez and Petrella finished 14th.

For Fredonia, Brown won the 2,000m steeplechase in a season best time of 7:11.12 to qualify for States next weekend. Brown also finished third in the 400m hurdle finals in a personal best time of 1:05.22.

“Of course we are exited to see Emily move on to compete at the State Championships next week. She works extremely hard and deserves her spot,” said Fredonia coach Tom Stokes.

“This weekend was a good place to end for a number of our athletes, with several personal best performances,” said Stokes.