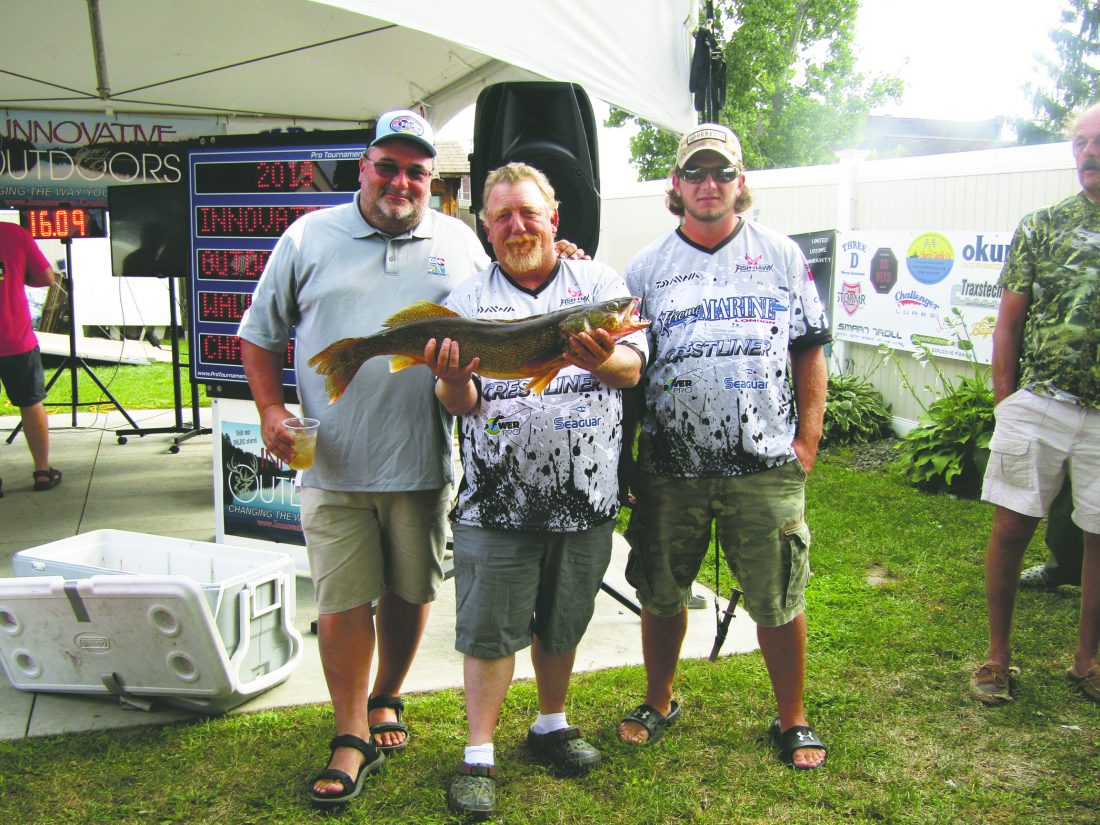 The fourth annual Innovative Outdoors Walleye Challenge is in the books, and the big winners for the most part, came from the Canadian shore line. Nick Nekoui had to wait to the 30th spot to weigh in his catch, but it was worth it when the scales pulled down to 36.23 pounds making him and his team Vision Clinic the winners of this year’s Innovative Outdoors Walleye Challenge.

Thirty-seven out of 48 teams opted to weigh-in fish on Saturday, and it was a rough day on the water. Even some of the bigger boats commented that they faced 6-foot waves for most of the day. The IOWC had the teams with the smaller number of fish weigh-in first. Jim Klein of team Eye-Fish was first up with a single fish weighing in at 5.77 pounds. Thomas Smaldino was next with two fish, followed by Team Clearwater lead by Chris Green. Green only had three walleye, but one of them weighed in at 10.17 pounds which proved to be the heaviest walleye of the event. Team Dragin Lures lead by Captain Dan Hanley also had three walleye, but his fish weighed 8.34 pounds which ended up being the sixth heaviest walleye.

The first team to weigh in six walleyes was also from Canada. Team Ziekertail lead by Shawn Barrett gave the leader a scare when his walleye pulled down the scales to 9.90, good for second place. His six fish total took the lead for total weight with 32.16 pounds total. 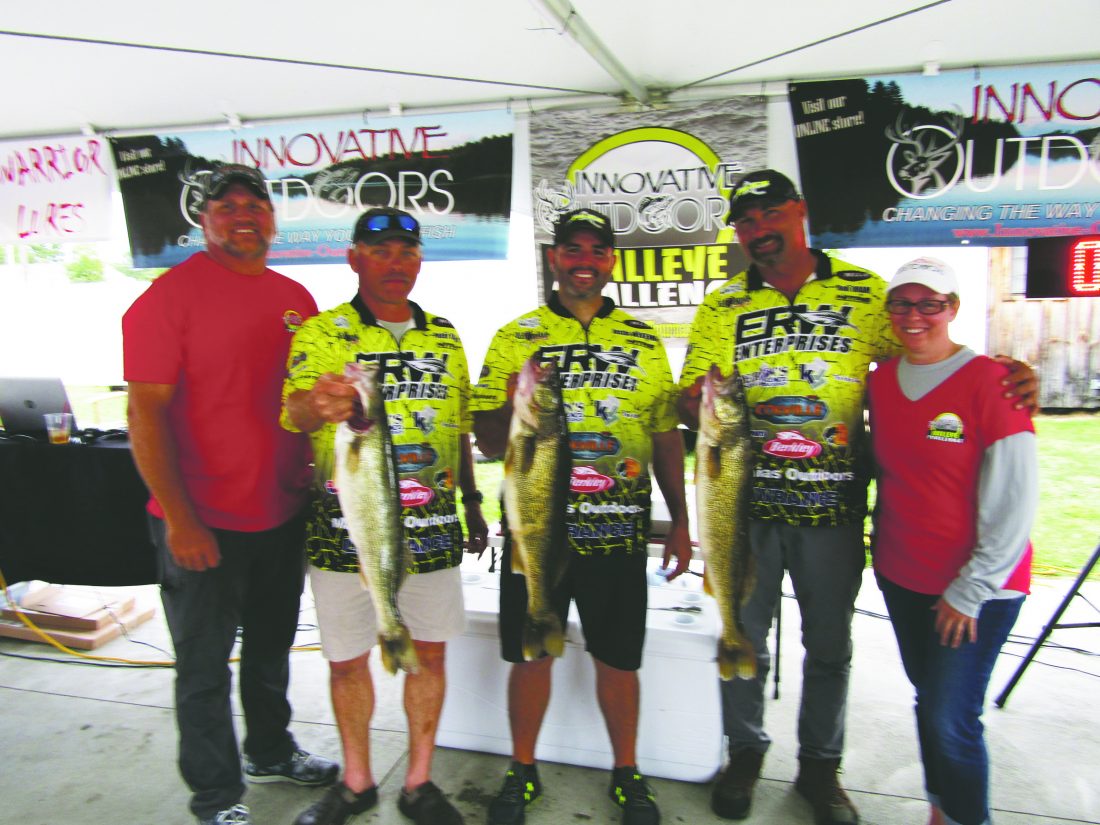 The old veteran fisherman Bob Rustowicz Team Forever Fishin found the final money spot at 8th place with a total of 29.21 and a big fish weighing 7.96. John Burke of team In Pursuit placed 7th with 29.75. Pete Smith III of Team Reely Jerkin It was next with a total of 30.56 and a big fish weighing 8.73. Taking fifth place was another local favorite Ron Duliba of Team Dances with Fish with a 30.56 total and big fish of 8.05. The Hawg Hunters lead by Joe Papalia found enough “hawgs” to total up 31.99. Shawn Barrett/Team Ziekertail had the second heaviest walleye and third place total weight at 32.16. The Eye-Con team lead by Rob Oram is no stranger to the winner circle and placed second with a total weight of 33.49 and the third heaviest walleye weighing 8.84.

Jim and Diane Steel ran another great tournament and would like to thank their sponsors: Traxtech, Fish Hawk electronics, Church Tackle, Black Hat Chimney & Fire Place, Warrior Lures, Three D Worm Harnesses, Torpedo Divers, Eye-Fish Premium Fishing Tackle, Bay Rat Lures and the Chautauqua County Visitors Bureau. Most of these teams may be back next year, looking forward to a fantastic Lake Erie walleye fishery and competing against each other. See you next year!

Calendar: Children of the Stream will present weekly FREE fly tying classes every Tuesday from 7 p.m. until 8:30 p.m. in the Costello Room in the Rockefeller Art Center at the State University of New York Fredonia, starting August 27/2019. Children ages 12 and up, including adults are welcome and encouraged to attend. All tools and material will be provided FREE. The 43 annual Greater Niagara Fall Classic Fish Odyssey Derby, a multi species fishing event is Aug. 17-25. Kids fish free with $14,000 in prizes. Go to www.fishodyssey.net. 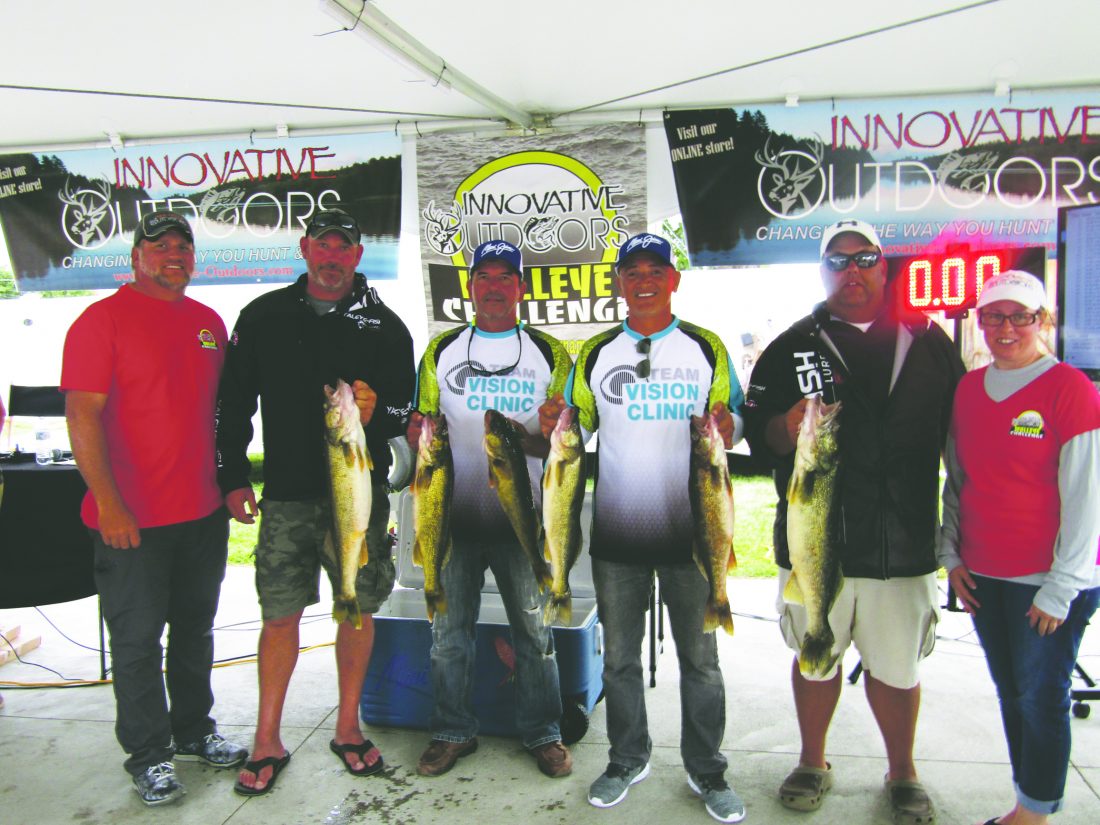