Playing with my new toy, the Cobra F9 Speedback 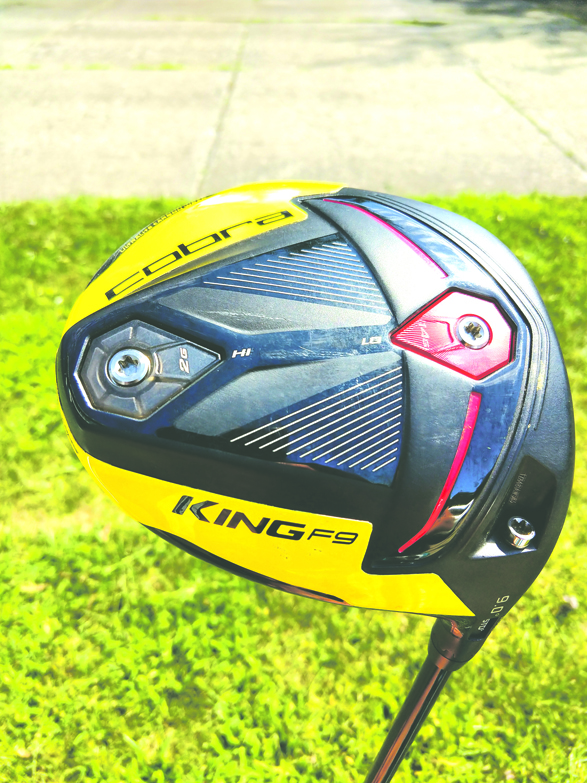 I had just started golfing and immediately fell in love with the sport. I bought a used set of clubs off eBay and was very happy with them. I was engaged, but living with my parents rent-free, so I had some disposable income. I decided I needed a new driver.

Well, being the complete noob that I was, I went to Dick’s Sporting Goods, found one that was on a super sale (because it was actually Callaway’s model from two years before that) and pulled it off the rack. In fairness, I hit some shots in the simulator before I bought it, but I didn’t do any research at all. I didn’t know about shaft stiffness or club loft or any of that.

For the past seven years, I’ve been happy with that driver. I definitely got lucky with my virtually blind buy. But it was time for an upgrade.

I started the research process and went down the rabbit hole that is YouTube. I watched several different YouTubers talk about all of the big brands. I went back and watched last year’s reviews, too, because the previous year’s model is always about half-price compared to the newest driver. I had it narrowed down to two — the Callaway Epic Flash and the Cobra F9 Speedback. The Cobra is more than $100 cheaper. Seeing as how I was leaning towards that one anyway, that’s the club that now resides in my bag.

Instead of going to a big-box store or buying online, I went local this time around. My friends at Pinehurst Golf Club in Westfield ordered my new driver for me. The price difference was basically nothing. I had shopped around all over on Amazon, Dick’s, etc. The price Nolan got for me was almost identical. And I had the peace of mind knowing that the Swansons would help me if anything went wrong with the club. Plus, you know, supporting a local family-owned business when possible just makes sense.

So I have this brand-new, gorgeous golf club in my bag. That doesn’t mean much if I can’t hit it, right? How have the results been?

Long answer: I’ve played two nine-hole rounds in the week-and-a-half since I picked up my new driver. My first, obviously, came at Pinehurst where my club was waiting for me. The very first shot with the club was just fine. It was a little off the toe, so the distance wasn’t great, but it found fairway.

The second shot was perhaps the best drive of my life. If you haven’t played No. 2 at Pinehurst, it has a slight dogleg left, which for a right-handed golfer can be a tough shot. I decided to try and shave off the dogleg and absolutely obliterated my drive over the trees on the left and back into the fairway, probably 50 yards from the green. A chip and two putts later and I had a par — something I don’t remember ever doing on that hole before.

No. 3 was a completely different story. My first attempt at driving was a bust. The ball hooked left something fierce. No worries, I thought. It was just some new-driver growing pains. My second one had the exact same hook on it. And then, you guessed it, my third try was a carbon copy. Listen, I’ll be the first to admit that I yank a lot of drives left, but I don’t ever hook them like that. Slice right? Of course. I truly had no answers. Finally I just dropped one on the other side of the bridge.

The drive on No. 5 was similar to the first one — good, but nothing special. On No. 6 I hit a low liner, which is another unusual shot for me, but at least this one went straight and rolled forever. Then on No. 8, I absolutely hammered one 300 yards dead straight. It felt so darn good I can’t even put it into words. The drive on No. 9 was pretty poor contact on my part, but the club proved it has some forgiveness to it because the ball still went relatively straight with decent distance. That was good to see.

On a non-driver related note, this was my buddy Ryan’s first time playing at Pinehurst and he couldn’t stop saying great things about the course — all of which I completely agree with. It’s wonderfully cared for. It has character and uniqueness. It’s challenging without being punishing. I just love it.

Speaking of courses I love, Ryan and I also paid a visit to Cassadaga Country Club. I wasn’t needed as a sub in the league this past week, but I wanted take Ryan there anyway. Once again, the new driver results were mixed. And once again, the bad ones were hooks to the left. The swing feels great. The contact feels solid. The balls starts straight and then sails badly to the left.

I did hit two absolute monster drives at CCC. For the second round in a row, I drove the green on No. 4. Then I hit the furthest drive I’ve ever hit on the par-five No. 9. I went over the creek and cleared the fairway bunker. Once again, the feeling was just sensational. Knowing those shots are in there almost makes the inconsistency with the driver even more frustrating.

The advantage of this new Cobra driver is that it has several settings that I can play around with. There are weights that I can move from the front to the back to affect spin rate. I can change the launch angle from 9-12 degrees. Unfortunately, I haven’t had a chance to play around with those factors yet. Hopefully I can fix that hook without changing my swing or grip, because I’ve spent many years working on those things.

I’m extremely excited about the round I have planned for this coming week. Be sure to check next Monday’s OBSERVER for a special edition of the Golfer’s Diary.

Until then, golf is great. Go get some.