Keough thankful to start in Dunkirk 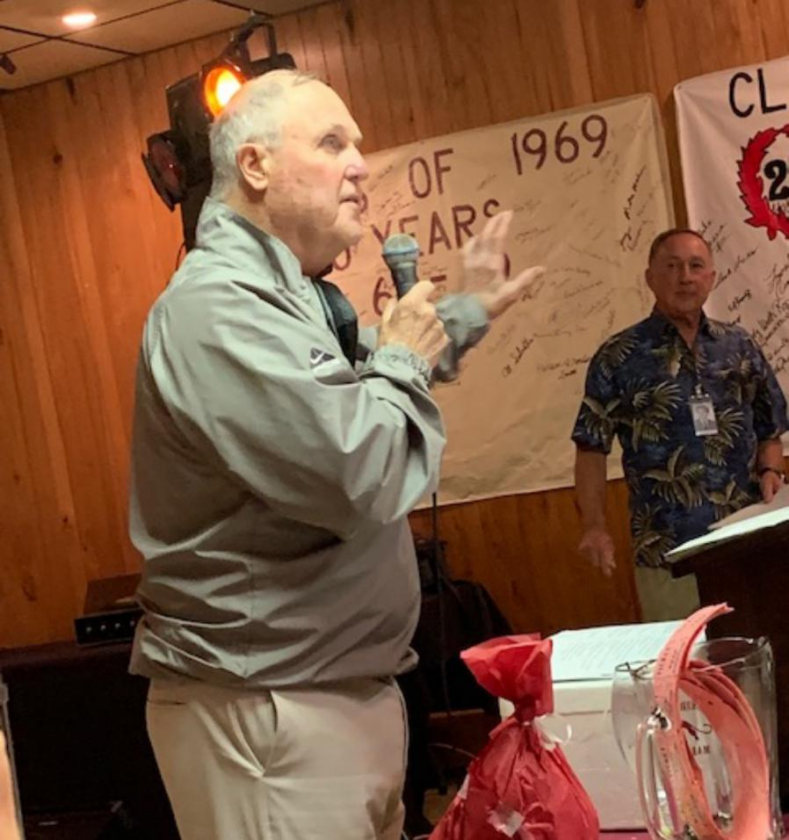 Submitted photos Former Dunkirk football coach Vincent Keough returned to Dunkirk in early August to guest speak at the class of 1969’s 50 year reunion. Above, Keough is shown with a handful of his former players. Pictured left to right are Fred Catalano, Frank Testa, Keough, Bill Bartholdi, Tim Jakubiec, and Jerry Drummond. Below, Keough is pictured giving his speech to the attendees of the Dunkirk class reunion.

When Dunkirk’s class of 1969 held their 50 year reunion in early August, they brought back a special guest to highlight their final class reunion. Vincent Keough, the coach of Dunkirk’s football team in 1969, along with his wife, made the trip to Dunkirk all the way from their home just south of Boston, Massachusetts.

“We had a nice, comfortable flight here,” Keough said.

Keough’s team in ’69 won the Southwestern championship, which is something Keough is still proud of, not only for the community, but for himself as well. Dunkirk was the first of many stops on Keough’s coaching journey. After being at Dunkirk for three seasons, with a championship title now in hand, Keough set his sights for the college game.

Keough served as the freshman coach, as freshman players couldn’t play on the varsity team in 1970. Unfortunately for Keough, U.B. dropped their football program after his first season, forcing him to go elsewhere. Keough then began bouncing around several times after that. 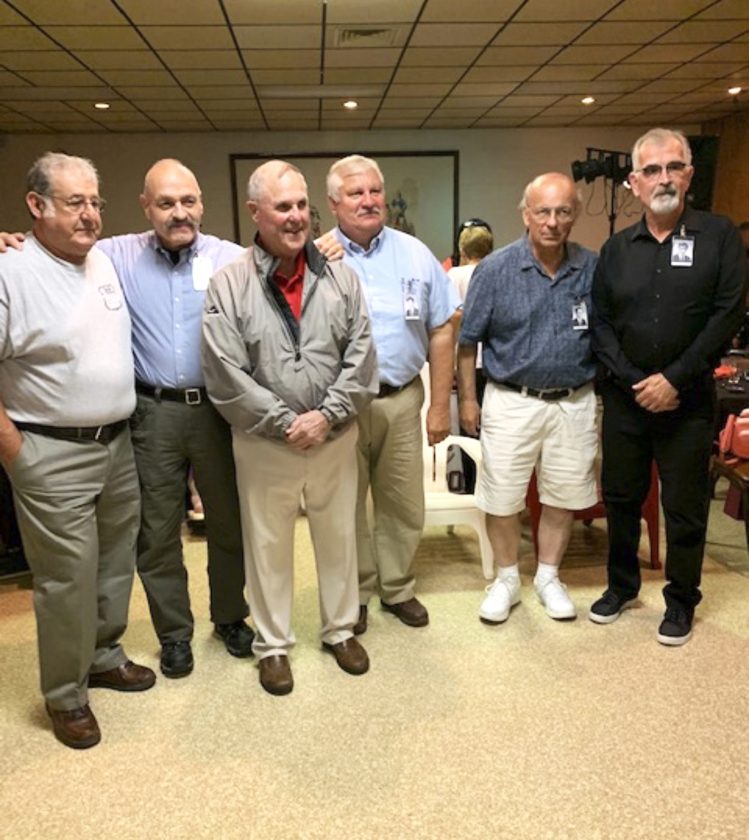 Submitted photos Former Dunkirk football coach Vincent Keough returned to Dunkirk in early August to guest speak at the class of 1969’s 50 year reunion. Above, Keough is shown with a handful of his former players. Pictured left to right are Fred Catalano, Frank Testa, Keough, Bill Bartholdi, Tim Jakubiec, and Jerry Drummond. Below, Keough is pictured giving his speech to the attendees of the Dunkirk class reunion.

After stops at Lawrence High School, Pittsburgh State, Marymount, and the University of New Hampshire, Keough went back home to be the athletic director at a high school south of Boston. Despite retiring from coaching in 2000, Keough wanted to still be active in football.

With his long, illustrious career of coaching, it all started in Dunkirk, which is what Keough wants people in this community to know.

“I had a great bunch of kids in ’68 and ’69. I haven’t been around a group of kids and a school district as great as the one there is. It was a great start to my career,” Keough said.

Keough had nothing but good things to say about the community, from it being the best stating point he could ask for, to maybe still having a hint of regret about ever leaving.

“I second guessed myself when I had to make the decision to leave, but I had ambitions like everyone else. It was the right thing for me, but I did second guess it,” Keough said.

The second guessing of his decision came from the community and the team he had around him.

“They were hungry. They did everything. Practices were long with no complaints and the town was completely behind us. I was very happy to be a part of that. It was one of those things where you walk in and everything was there,” Keough stated.

Keough traveled across the east coast, coaching football at several different stops. He learned that anywhere you go rates football differently than other places. When he was at Dunkirk, Western New York was just starting to adapt to the newer game.

“In the east, football was the number one thing. It wasn’t like that everywhere in the country. This area was just learning to throw the ball too,” Keough said.

Keough and his wife still visit the area regularly, as his wife is from the area. Keough fondly remembers the greens at Tri-County Country Club, where he still goes to golf when he is in the area. Even though Keough went all around the North East region, Dunkirk is one of the places nearest to his heart. And when he was invited back to speak at the class of 1969 reunion, Keough wanted to make sure everyone in Dunkirk knew that.

“I really wanted to go back and just say thanks,” Keough said.