CSP’s Brendon Ramsey (18) looks to break a tackle during a carry in Saturday’s game against Silver Creek/Forestville, in Silver Creek. OBSERVER Photo by Braden Carmen.

CSP Quarterback Gerrit Hinsdale follows through on a pass during Saturday’s game against Silver Creek/Forestville, in Silver Creek. OBSERVER Photo by Braden Carmen. 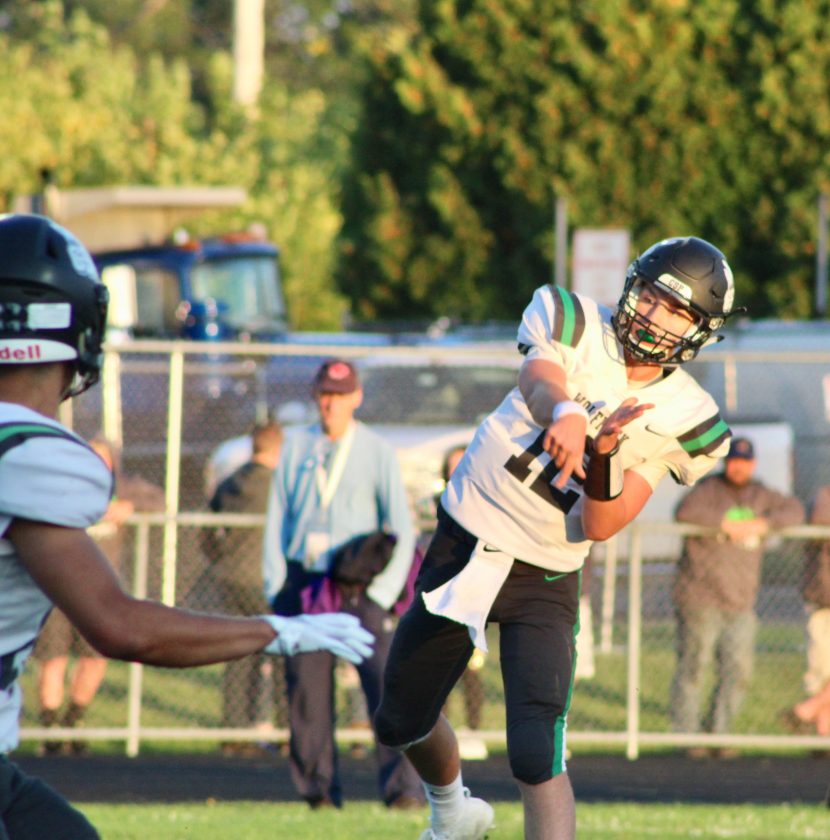 CSP Quarterback Gerrit Hinsdale follows through on a pass during Saturday’s game against Silver Creek/Forestville, in Silver Creek. OBSERVER Photo by Braden Carmen.

SILVER CREEK — The Clymer/Sherman/Panama Wolfpack had one of the most memorable seasons in Chautauqua County high school football history a year ago, ending with a Class D NY State Championship.

Last week, the Wolfpack won 28-0 at Geneseo to kick off its title defense, but CSP wasn’t satisfied with the outcome, especially in the first half.

Saturday night in Silver Creek, the Wolfpack got off to a start even they could be proud of, with 40 points in the first half, featuring four passing touchdowns, a 63-yard rushing score and a defensive touchdown. In the end, the CSP Wolfpack defeated the Silver Creek/Forestville Black Knights, 53-12, in a non-league football game on Saturday night at Silver Creek High School.

“It was a big statement. After last week, we only won 28-0 and we played a really bad first half,” said Wolfpack quarterback Gerrit Hinsdale. “It was a statement about our team and everybody around us, that we can score on both sides of the ball. We have a team that is very resilient and very tough. It could take us a long way.”

“This is the kind of football that we’ve come to expect of our guys to play,” said CSP coach Ty Harper. “We made some uncharacteristic mistakes last week, so we wanted to get on track early. We put an emphasis on explosive plays.” 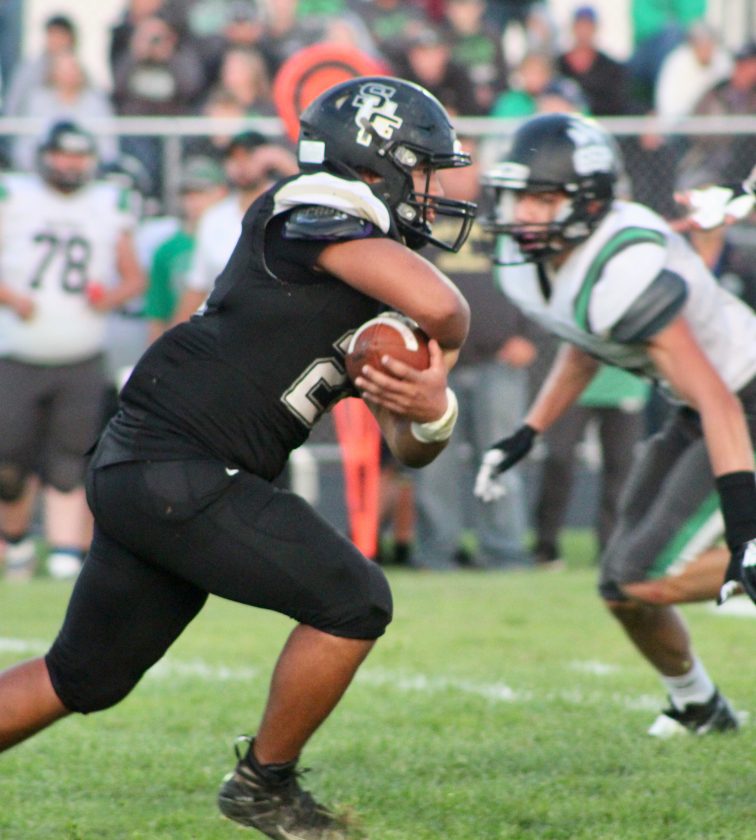 It didn’t take long for CSP to get on the board. On the game’s first drive, Hinsdale found tight end Braden Cook wide open across the middle of the field for a 53-yard touchdown.

On the ensuing drive by Silver Creek/Forestville (0-2, 0-1), a poor snap went over the head of quarterback Dominic Jamison, who was unable to fall on the ball. After pinballing off multiple players, CSP defensive end Owen Gratto picked the ball up and carried a tackler into the end zone for a touchdown. One tick less than three minutes into the game, CSP (2-0) held a 14-0 lead.

Things didn’t get much better for the Black Knights from there. After a three-and-out, CSP found the end zone quickly on another big play, as Connor Cooper received a pitch from Hinsdale and took off down the sidelines for a 63-yard touchdown run. The snap on the extra point was bobbled, leaving the score at 20-0 CSP, less than five minutes into the contest.

“They outplayed us,” said Helmer. “They were more physical than us, they outcoached me, and hats off to them.” 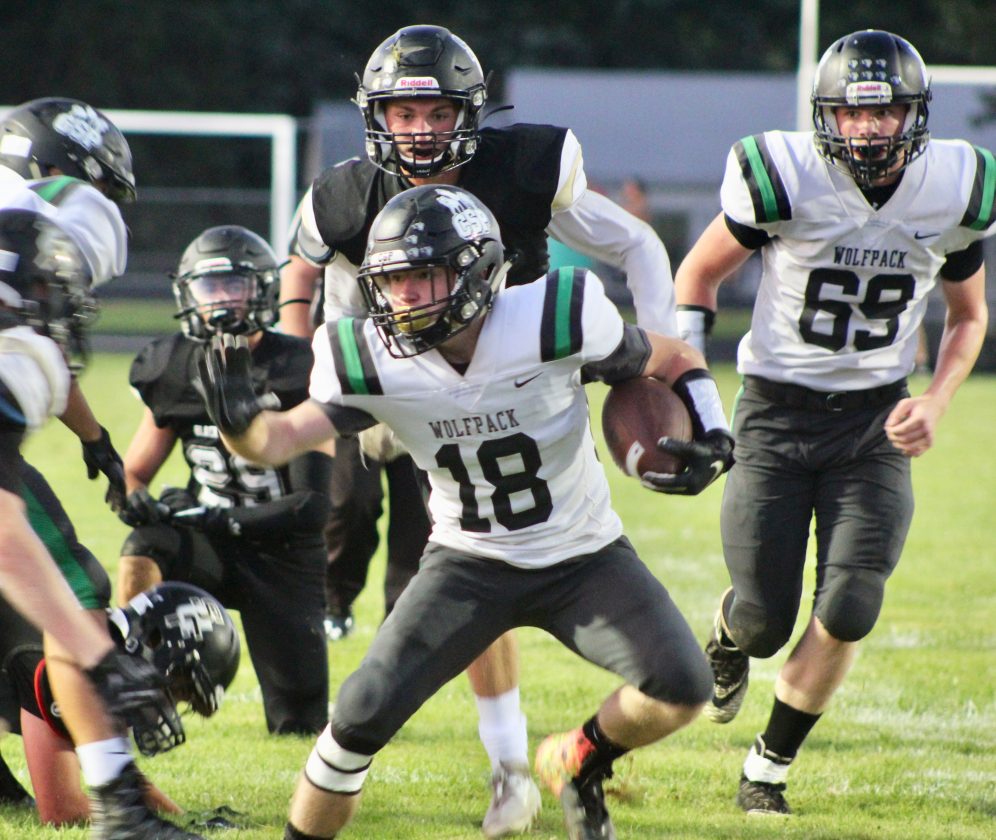 CSP’s Brendon Ramsey (18) looks to break a tackle during a carry in Saturday’s game against Silver Creek/Forestville, in Silver Creek. OBSERVER Photo by Braden Carmen.

“He executes. He puts the ball where it needs to be and we couldn’t really get to him,” said Helmer of Hinsdale. “He put the ball on the money, on time — he’s a really good quarterback.”

The Black Knights got on the board for the first time on the next CSP drive, after a fumble was recovered by Jake Smith and returned 56 yards for a touchdown. The score was 33-6 but the Silver Creek crowd was back in the game, momentarily.

“We have a great group of kids,” said Helmer. “None of them are trying to not win. They’re trying to fight. The resiliency and the no-quit, especially in a game like that, that’s all you can ask — to just keep playing.”

CSP put an end to the Black Knights’ momentum on the next drive, as Hinsdale hit John Swabik on a pass over the middle that resulted in a 27-yard touchdown. It was Hinsdale’s fourth touchdown pass of the first half, all to different receivers. 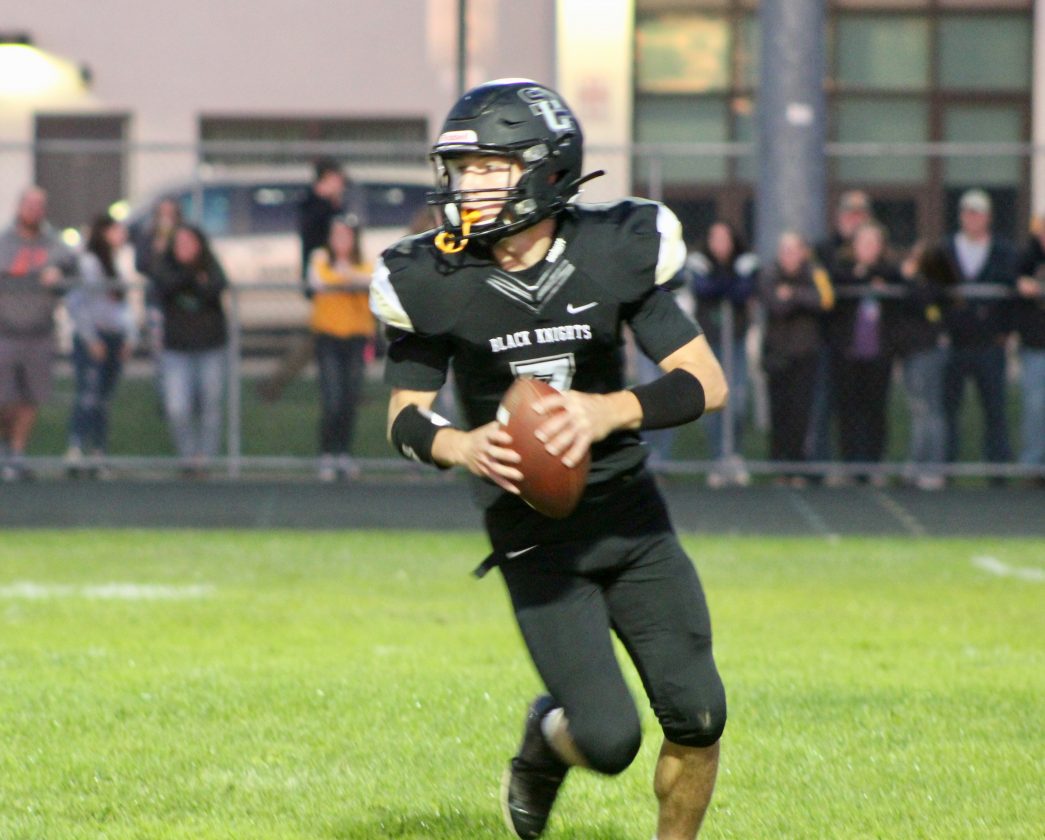 “I was taking what the defense was giving me,” said Hinsdale. “My guys got open. That’s something we work on a lot. … It was a credit to them for getting open.”

On the opening drive of the second half, CSP’s Cooper picked off a Jamison pass and returned it 30 yards for a touchdown.

“With three blown coverages, the snap over Jamison’s head (in the first quarter) and the pick-six, that’s five scores,” said Helmer. “They’re very good, I’m not taking anything away from them. They beat us all over the place, but we just helped out way too much.”

Silver Creek/Forestville’s offense got on the board on the next drive, as Angel Caraballo punched in a touchdown run from one yard out. Following that drive, CSP sent out many of its reserves on offense, signaling the end of the day for Hinsdale and the CSP offense after scoring touchdowns on five of its seven drives. Five different players scored touchdowns for CSP in the first half.

“I’ve been very spoiled the last few years with the number of talented skill guys I’ve been lucky enough to coach,” said Harper. “Those skill guys were ready when their number was called.” 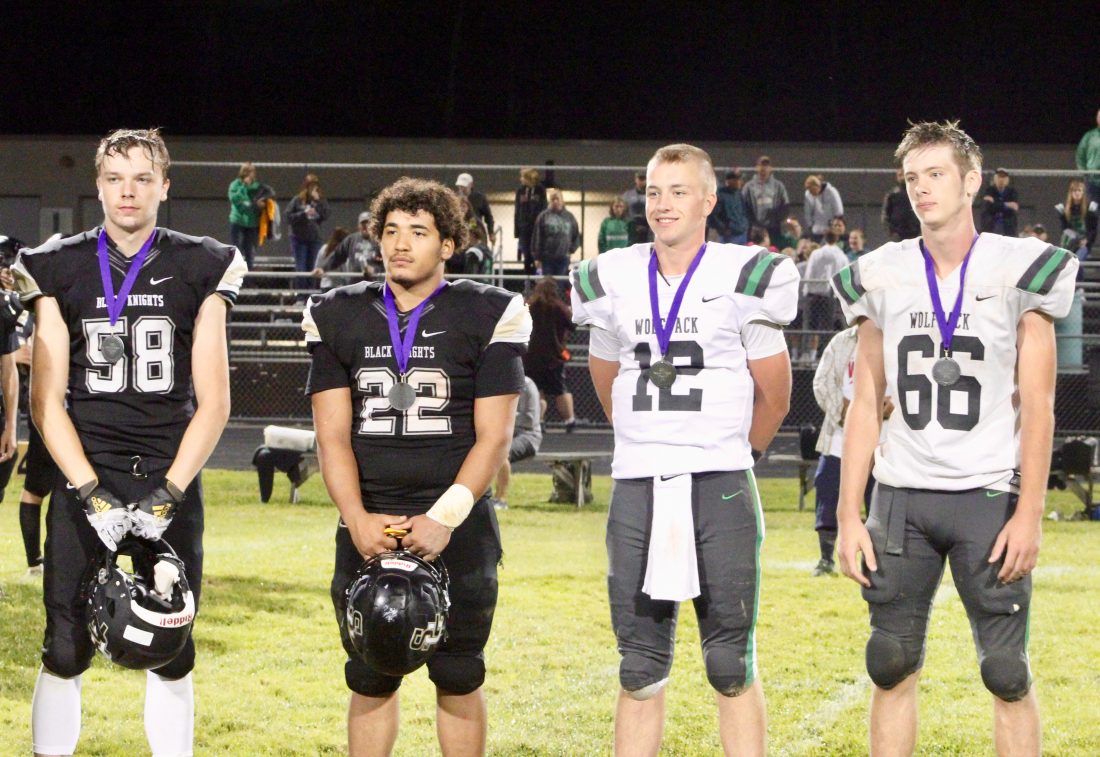 CSP backup quarterback Bishop Kopta led the Wolfpack on a scoring drive to cap off the scoring for the night, punctuated by a 2-yard touchdown run by Roger Mack with nine seconds left in the third quarter. The fourth quarter was scoreless by both sides.

“The most important game is always the next one, and we’ve got a huge game coming up next Friday night at Ellicottville. They’re a great team, they’ve got some really good athletes over there and we’ve never beat them. That is going to be a big test for us and hopefully we can carry this momentum forward,” said Harper.

“We need to get healthy,” said Helmer, who noted that multiple players were limited or out of Saturday’s game. “We’ve just got to execute. Our execution is just poor right now.”

NOTES: Saturday night was Military Appreciation Night at Silver Creek. All five schools — Clymer, Sherman, Panama, Forestville and Silver Creek — had a military veteran represent their school as an honorary captain at the game’s opening coin toss. “I thought the military night worked out really well. We had a great crowd. We just didn’t win the ballgame,” said Helmer.

CSP’s Hinsdale finished 6-for-9 passing for 163 yards and four touchdowns. Cooper had 75 yards rushing on seven attempts, while Derek Sears had 64 yards rushing on 11 carries. Silver Creek/Forestville’s Caraballo had 120 yards and a touchdown on 22 carries. The Black Knights finished with only 159 total yards offensively, while CSP had 362 yards of total offense. Silver Creek/Forestville had three turnovers, while CSP had one.

The character award winners from each team were CSP’s Lucas Rater and Silver Creek/Forestville’s Chandler Eggleston.