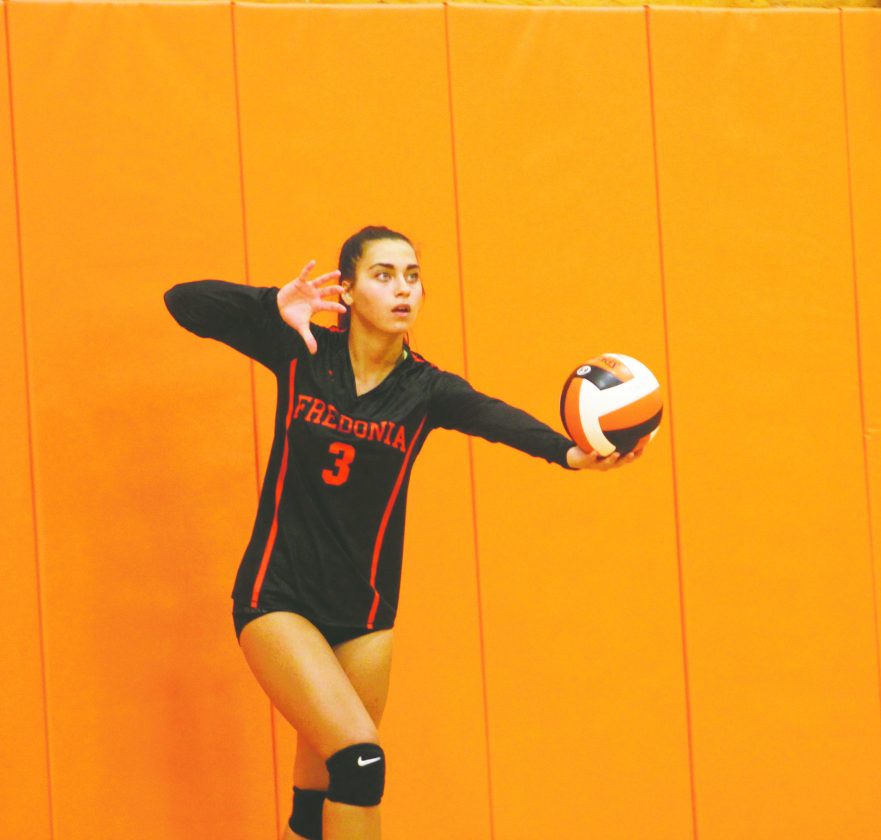 After a pair of tough losses to Gowanda and North Collins last week to start the year off, the Fredonia Lady ‘Billies looked to get back on track this week. The Lady ‘Billies did just that, earning a second league win in three nights with a three set victory over Forestville, 25-19, 25-16, 25-18, in a CCAA North league volleyball game at Fredonia High School on Wednesday night.

“I thought they did a really good job playing cohesive as a group,” said Fredonia coach Amanda Krakowiak of her team’s performance Wednesday. “They were moving their feet and they were helping each other out when they were in danger. They were getting balls and making passes where in the past couple years, wouldn’t make it back over the net.”

Fredonia (2-2) came out on top of a nearly evenly-matched first set, but through the first 12 points of the second set, Forestville (0-4) led 7-5. Fredonia needed to respond, and after 11 of the next 12 points — including seven straight tallies — the Lady ‘Billies led 16-8 in the second set and were well on their way to another victory.

“It gives them the confidence to believe in themselves, to keep pushing and to move forward,” said Krakowiak. “Volleyball is a very emotional sport. You need that energy and enthusiasm to pull out big wins.”

The Lady ‘Billies all but put the game away at the start of the third set with 11 of the first 14 points.

Anna Valone led Fredonia on Wednesday night with 13 kills, along with three aces. Rebecca Piede had 12 assists and four aces for the Lady ‘Billies, while Rhayna Myers had six kills and three aces.

“We’ve been working on trying to make our offense stronger. (Wednesday) I think the girls did a great job having a stronger presence at the net,” said Krakowiak.

Now that Fredonia is back on track with an even league and overall record of 2-2, the Lady ‘Billies look to keep the momentum in their favor on Friday night. League foe Cassadaga Valley comes to town on Friday, also with the ball rolling in its favor lately after an 0-2 start to the year. Cassadaga Valley beat Silver Creek for its third straight win, in three sets, on Wednesday to improve to 3-2 on the season.

“We had a tough first two games of the season, and we knew they were going to be tough,” said Krakowiak. “I wouldn’t start it any other way. We wanted to start with a bang. We’ve had some growing pains, but hopefully we can improve and grow.”