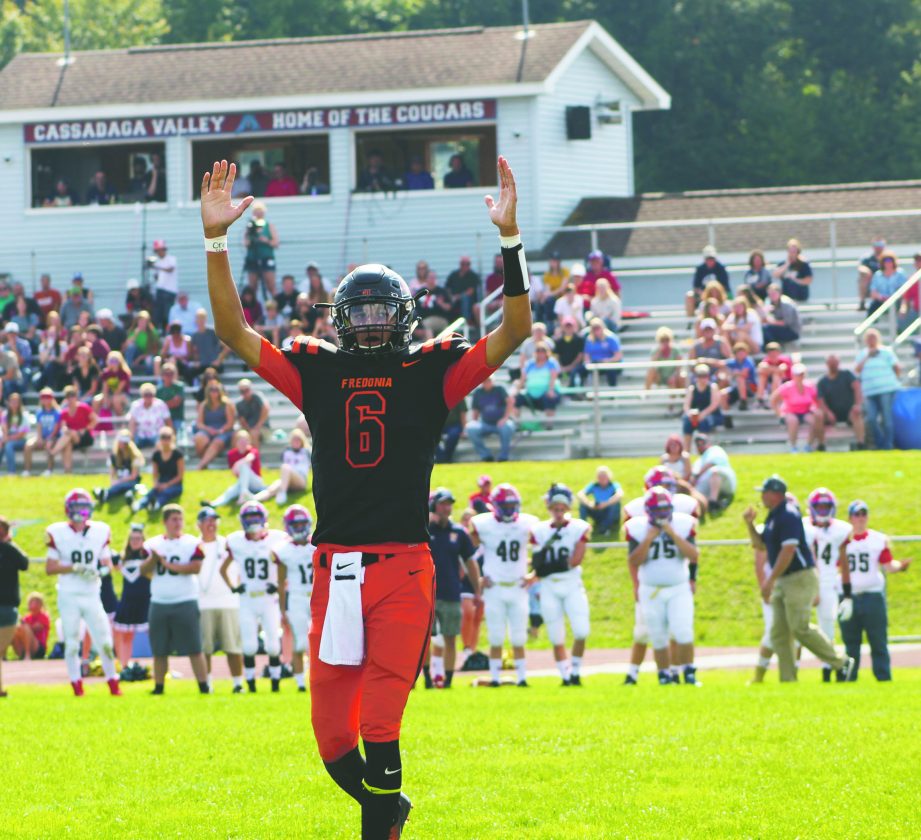 SINCLAIRVILLE — Big-time players make plays in big moments. For Fredonia to come out on top in a tight game on Saturday afternoon, the Hillbillies needed every big play they could get from their standout players. As it turned out, Fredonia did just enough to walk off the field with a win over the Cassadaga Valley/Falconer Golden Cougars, 18-14, in a Section VI, Class C South football game at Cassadaga Valley High School.

“It was resiliency, to come back time and time again. We had something positive every time after they scored,” said Fredonia coach Greg Sherlock. “It’s kids in high school. It’s play by play and moment by moment. They live and die by each play.”

After Fredonia (2-1, 2-1) fumbled on its first drive of the game and punted on the second, the first quarter remained scoreless.

Eventually, on an 11-play drive, the Hillbillies were the first to light up the scoreboard late in the second quarter. Fredonia quarterback Nick Whitfield found tight end Jake Skinner for a 10-yard touchdown on 3rd-and-5. The drive was slowed down initially, as Fredonia called two timeouts after having trouble getting plays off on time, but after switching to more of a hurry-up offense, the Hillbillies marched right down the field. Fredonia led 6-0 at halftime after the touchdown, a failed extra point, and then a Golden Cougar drive which ended in an incomplete Hail Mary pass as the half expired.

After the half, Cassadaga Valley/Falconer (0-3, 0-2) responded with a drive with multiple controversies. First, Fredonia broke up a pass on fourth down, but as the defender tackled the intended receiver to the ground, the Hillbillies were called for a personal foul to continue the drive. Next, after it appeared Fredonia stripped the Golden Cougars rusher in the red zone, the referees said the runner was down and crossed the line to gain for a 1st-and-goal. Cassadaga Valley/Falconer’s Noah Abram followed with a 3-yard touchdown run to cap off the drive. After the extra point was good, the Golden Cougars led 7-6 with 5:03 left in the third quarter. The drive took 6:57 off the clock. 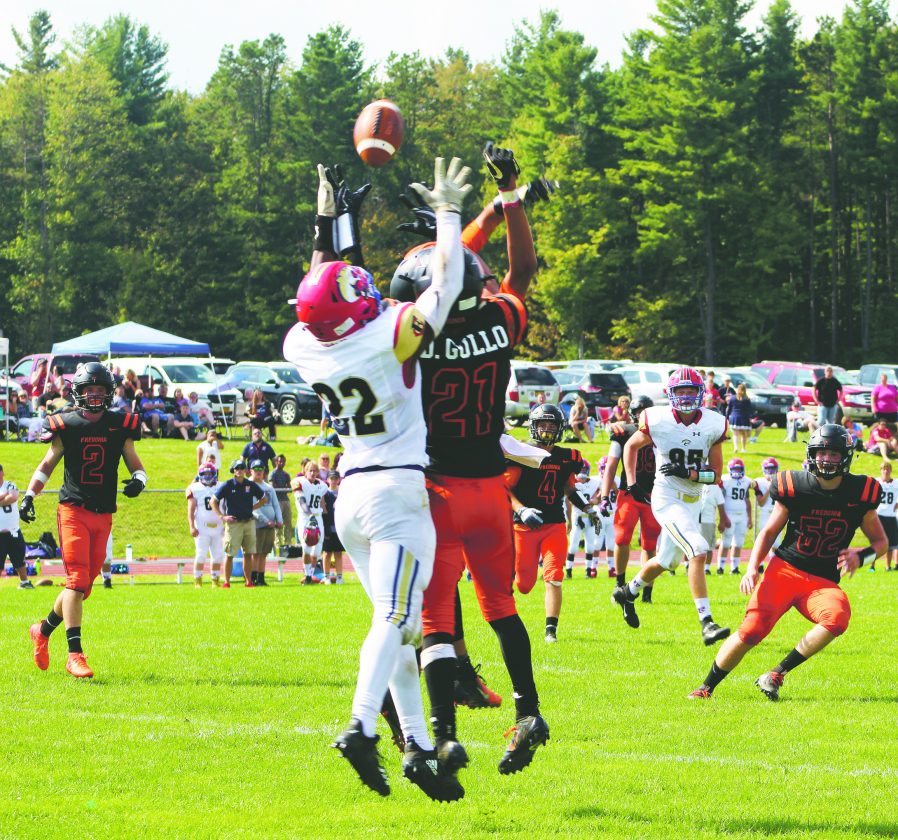 Immediately after the long Cassadaga Valley/Falconer drive, Fredonia answered right back. Skinner returned the ensuing kickoff 32 yards to set the Hillbillies up past midfield. Fredonia turned back to Dom Gullo on the drive, and he rewarded them with five carries for 32 yards including a 5-yard touchdown run to put the Hillbillies back on top, 12-7.

“He came through. There was good blocking, he hit the crease and he was gone,” said Cassadaga Valley/Falconer coach Joel Sopak.

Fredonia turned the ball over on downs on its next drive, giving Cassadaga Valley/Falconer the ball back with a lead in the fourth quarter, with 7:45 left in the game.

Needing a stop at midfield, the Fredonia defense was tasked with getting the ball back. On 3rd-and-1, Skinner burst through the middle of the line to blow up the play, then Fredonia gang-tackled the ball carrier for just a gain of one. The ball was just short, forcing a 4th-and-inches. Once again, Fredonia’s defense came up big, as the Hillbillies stuffed the quarterback sneak and forced a turnover on downs.

“Our lineman on that really bailed us out. They moved the pile back,” said Sherlock. “Good things happened because they got a push.”

“We had a couple critical mistakes. 4th-and-one there, it’s tough. That’s a hard pill to swallow,” said Sopak. “That was a big one, but you’ve got to make plays before that and after that. That one just sticks out because of the magnitude of that play.”

With 5:25 left in the game, Fredonia got the ball back at the 50-yard line, down 14-12. On a 3rd-and-2, the Golden Cougars defense dialed up a blitz, but what happened next was a little bit of Fredonia magic.

Whitfield saw the blitz coming and stepped up in the pocket, then he uncorked a deep ball high in the air down the right sideline. Skinner went up for the ball and made a contested catch with a defender in his face. He was tackled at the Cassadaga Valley/Falconer 6-yard line after a gain of 46 yards through the air.

“As soon as we got that pass and Skinner got it down there, all of a sudden the guys on the field were jumping around,” said Sherlock. “They were re-energized.”

On the next play, Dom Gullo spun to make a defender miss and crossed the goal line for the go-ahead touchdown, leaving the score at 18-14.

“Dom is full of energy. He has been ever since I’ve known him,” said Sherlock. “We’ve known he’s a good back. He was a good back last year, he just had to sit behind Joell (Colon). … Dom doesn’t need a lot of help. He’s got great vision.”

On the next drive, Whitfield — Fredonia’s starting quarterback, who was one of only a few Hillbillies starters to not play both sides of the ball out of the gates — subbed in on defense to rush the passer off the edge. It turned out to be just what Fredonia needed to close out the win. Whitfield had three quarterback pressures on the drive and a sack. The Golden Cougars turned the ball over on downs with close to two minutes left in the game.

“We know Nick can play defense. Nick is as tough as they come,” said Sherlock. “He’s going to be one of the best players in Western New York, if he isn’t close now. Defensively, he’s tough and we put him out there for that reason.”

As good as Dom Gullo was on the day for Fredonia, his only major mistake came with under two minutes remaining. He fumbled the ball inside the red zone and gave the Golden Cougars the ball back at their own 10-yard line.

In the end, after pressure on the quarterback once again, Fredonia’s Troy Lemiszko came away with the game-sealing interception.

Fredonia was led by Dom Gullo on the ground with 127 yards and two touchdowns on 24 carries. Skinner had the game’s longest catch of 46 yards and the only receiving touchdown on the day. He also had a team-high 13 tackles.

Next week, Cassadaga Valley/Falconer is at Chautauqua Lake/Westfield/Brocton on Saturday night.

“We’re inching closer to that victory. Hopefully it comes next week,” said Sopak. “(Even after Saturday’s loss) I’m happy. I’m happy with the way we played.”

Fredonia hosts Southwestern on Friday night at the Orange Bowl.

“They’re a good team, but we have athletes too,” said Sherlock. “We have them at home and hopefully we come to play.”