A fight without a loser 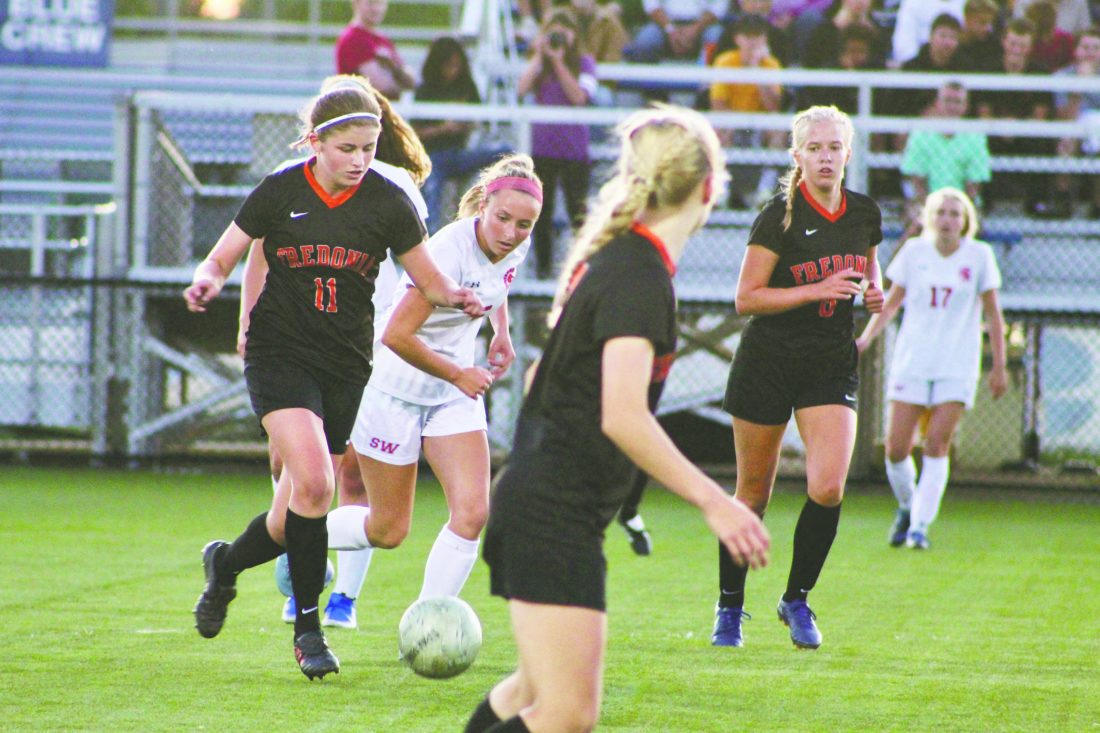 The Fredonia Lady ‘Billies hosted the Southwestern Lady Trojans on Tuesday night at Fredonia State in the first home match of the year in Fredonia, in a closely-contested girls soccer contest. The scoreboard remained with zeroes in the score column for each side through all 100 minutes of play, as the teams ended with a scoreless draw.

Though the result for each side was the same, each team left the pitch feeling quite differently.

“It was very toughly-fought by both sides,” said Southwestern coach Derek Houser. “I thought we brought a really good energy to the match. … We just couldn’t find a way to put it in the back of the net tonight.”

Southwestern (4-1-1) left feeling frustrated, as time and time again, Fredonia goalkeeper Kelly Gullo was in position to make a save on the Lady Trojans’ attempts from just outside the top of the box.

Fredonia (1-2-1) however, left feeling proud of its second shutout of the season, holding one of the top teams of the league in check. 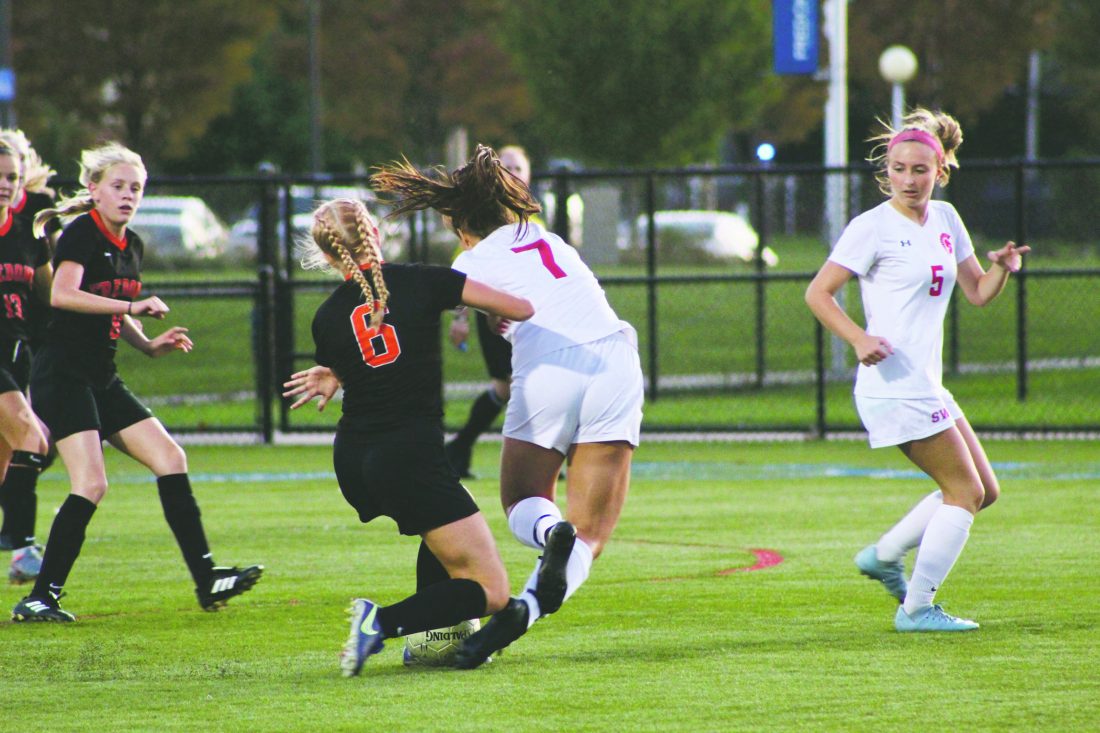 Fredonia's Paige Supkoski (6) and Southwestern's Audrey Ducat (7) collide in a battle for the ball on Tuesday at Fredonia State. OBSERVER Photo by Braden Carmen.

“I’m not frustrated at all, I’m actually ecstatic,” said Fredonia coach Brett Gould. “Every team, every year at the beginning of the season, we spend our time trying to find our identity. … Tonight, through regulation and double overtime, we got to watch kids grow up all over the place.”

Fredonia had its first solid scoring opportunity in the 15th minute, as a shot by Paige Supkoski went just wide of the net after she was set up to make a run by a throw-in from Kazlin Beers. Southwestern had the possession near midfield for the majority of the rest of the first half.

In the second half, Southwestern began to get shots on net, but Gullo was positioned to make the save nearly every time. Fortunately for Fredonia, the only time she wasn’t in perfect position — with 19:12 left in the second half as Southwestern’s Mia Delong split the Fredonia defenders — the shot went just wide of the post.

“We did a lot of the things we set out to do,” said Houser. “… except to put the ball in the back of the net.”

Southwestern had another prime opportunity in the second half, as the Lady Trojans were set up with a free kick just outside of the box with under a minute to go after a foul. Gullo was there to make the save and time ran out of regulation shortly after.

“She knows that she has the green light with her instincts to do what she needs to do,” said Gould of Gullo. “Somewhere between basketball, softball and soccer, it all mashes up into a vision for that position. She does a great job. There’s a reason last year she was an All-Star.”

Just as Southwestern did, Fredonia had its own stellar chance to score as the game progressed to the first of two 10-minute overtime periods. Supkoski received a bouncing pass in the box on a full sprint and shot quickly, without the benefit of settling the ball down. The difficult shot was met by one of many saves on the day by Southwestern’s goalkeeper, Brynne Conley — who was pressed into action as the game’s keeper because of an injury to Hanna Johnson.

“Brynne Conley came in and did an unbelievable job on about as short of notice as possible,” said Houser. “… and with the defense, we were able to get a shutout.”

In the end, both teams came away with a draw, but both can move forward looking to build off the impressive defensive showing they showed on Tuesday night under the lights of Fredonia State.

“This is a night where both teams, both schools need to go home with a smile on their face, feeling good about their effort,” said Gould. “It was fun to watch.”

Fredonia has another big showdown on Thursday, as the Lady ‘Billies travel to rival Dunkirk. Southwestern plays at Olean on Thursday.

“Southwestern came in at 4-1, undefeated in league play, and we pitch a shutout. That’s impressive. That’s really impressive,” said Gould. “As the season goes, we’ll figure out ways to push the ball over the line.”

Fredonia’s Paige Supkoski (6) and Southwestern’s Audrey Ducat (7) collide in a battle for the ball on Tuesday at Fredonia State. OBSERVER Photo by Braden Carmen.