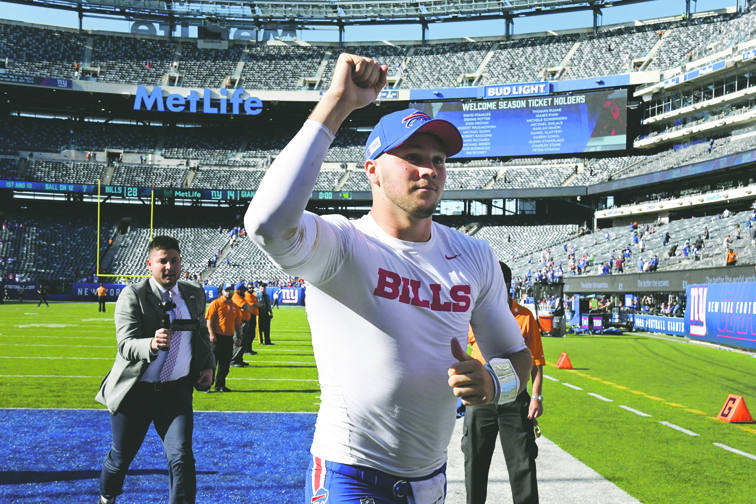 Last week, I called for Buffalo Bills quarterback Josh Allen to step his game up. Sunday, he did just that, and in doing so, the Bills improved to 2-0 with a pair of road wins to start the year for the first time in franchise history.

It was the defense that did the heavy lifting a week ago, leaving Allen plenty of room to make mistakes. This week, that wasn’t the case, as Saquon Barkley carried the New York Giants offense down the field for a touchdown on the opening drive on just five plays in 2:24. After a three-and-out on the Bills’ first drive, the pressure was on Allen to right the ship quickly to avoid a loss to the shorthanded Giants.

Allen sure had an impressive response.

On the Bills’ second drive of the game, Allen led Buffalo on a 10-play, 75-yard drive capped off by a 6-yard rushing touchdown by the 6-foot-5 signal caller on a designed run. As it turned out, Allen was just getting started. The next Bills drive led to another score, as Allen led the Bills on an 11-play, 70-yard drive in 4:15 punctuated by rookie Devin Singletary’s first NFL touchdown run, a 14-yard carry to give Buffalo a 14-7 lead. Allen overthrew John Brown on a wide open deep ball early in the drive, but recovered quickly and still ended the drive with a touchdown.

While back-to-back 10-plus play, 70-plus yard scoring drives were impressive enough, Allen one-upped them both on the next possession. Pinned back on his own 2-yard line, Allen confidently worked out of trouble in a hurry, with a 15-yard pass to Brown to give the Bills some breathing room. Later on the drive, Allen found Cole Beasley for a 51-yard gain deep down the right sideline. Allen executed a nifty short pass to Isaiah McKenzie in motion for a 14-yard touchdown. In all, the Bills went 98 yards on just seven plays in 4:26, and the Bills took a 21-7 lead into halftime.

The Bills offense went quiet in the second half and the Giants capitalized. Eli Manning found TJ Jones in the back of the end zone early in the fourth quarter to cut the Giants deficit to just one score. But just as he did in the first half, Allen immediately answered with a scoring drive of his own. It appeared as the Bills would settle for a 21-yard field goal, but after a Giants penalty on the kick, Buffalo was set up at first-and-goal. Two plays later, Frank Gore punched in a 1-yard touchdown run to put the Bills ahead by two touchdowns once again. A diving interception later in the final period by Jordan Poyer put the game away.

Allen finished the day 19-for-30 for 253 yards passing and one touchdown through the air, with another score on the ground. While the passing statistics weren’t astronomical, Allen made almost no mistakes. After four turnovers a week ago, Allen’s performance in Week 2 was as good as any Bills fan could ask for. The Bills now sit at 2-0 coming home for the opener at New Era Field next Sunday against the Cincinnati Bengals. After winning in two very different ways over the first two weeks, the Bills have a good chance for another win in Week 3.