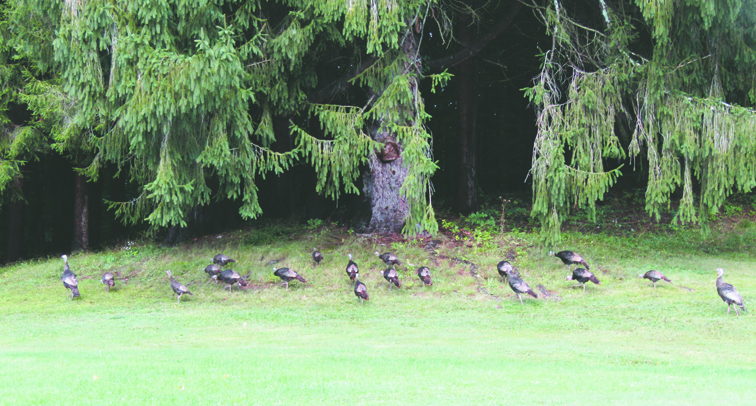 OBSERVER Photo by Gene Pauszek This nice flock of wild turkey pouts was seen near Gowanda on Saturday morning.

The New York State Department of Environmental Conservation and the Iroquois National Wildlife Refuge will be hosting the annual waterfowl hunter information meeting at the Refuge Headquarters on Casey Road in Alabama, Genesee County. The meeting will take place on Sept. 23 from 7 to 9 p.m.

Wildlife biologists from NWR and the DEC will discuss items of interest to waterfowl hunters in a forum that will include: Highlights of waterfowl management and research programs at Iroquois, NWR, Oak Orchard, Northern Montezuma and Braddock Bay Wildlife Management areas, including the drawn down schedules and hunt programs. Regional and statewide waterfowl news and updates including the waterfowl banding results will be covered, along with Atlantic Flyway news and waterfowl population population status, and the 2019-20 duck and goose seasons for New York State.

*Note that an opportunity will be provided to schedule a public tour of wetlands management work being done at Oak Orchard and Tonawanda WMA and Iroquois. Need directions to the meeting? Take the NYS Thruway,and take the Pembroke exit (48A) and travel north on Route 77 to Alabama Center. Continue north on Rte. 63 about one mile, turn left on Casey Road. The office is about a mile down the road on the right.

A report from the DEC released the results of Raptor surveys completed at Canadaway Creek, Kabob and Hanging Bog Wildlife Management Areas done during the months of March and April. In addition, ruffled grouse drumming surveys and turkey gobbling surveys were completed at the same areas, as well as Carlton Hill, Keeney Swamp, Harwood lake, Allegheny Reservoir, Genesee Valley and Hampton Brook. In addition woodcock surveys were conducted in these areas, as well as Cazenovia Creek and Tillman Road. Despite cooler than normal nocturnal spring time temperatures and lots of precipitation, the results point toward a slight increase in numbers of all three species, compared to the 2018 studies done in the same areas.

We are number one! Zen Olow, our Chautauqua County Federation of Sportsmen’s Club’s President, reported that Wal-Mart in Dunkirk/Fredonia has sold the most Habitat stamps in Western New York and possibly even further than that. The stamp costs $5 and the funds go to improve access/habitat for wildlife projects. Keep up the good work! The Chautauqua County Federation of Sportsmen is selling tickets to their annual steak fry and auction to be held at the Lakewood Rod & Gun Club on Sept. 28 from 1-4 p.m. They also are looking for auction items pertaining to the outdoors. Have you got a wildlife print you no longer want? For tickets or more information, contact Olow at 640-2776.

Calendar: The Northern Chautauqua Conservation Club has resumed their FREE Monday night fly-tying instruction/program, from 6 p.m. until 7:30 p.m. No sign-up necessary, just show up. All materials and tools provided for free. The Con Club is located on Mullet Street in Dunkirk. Turn towards the lake at the Country Fair store.