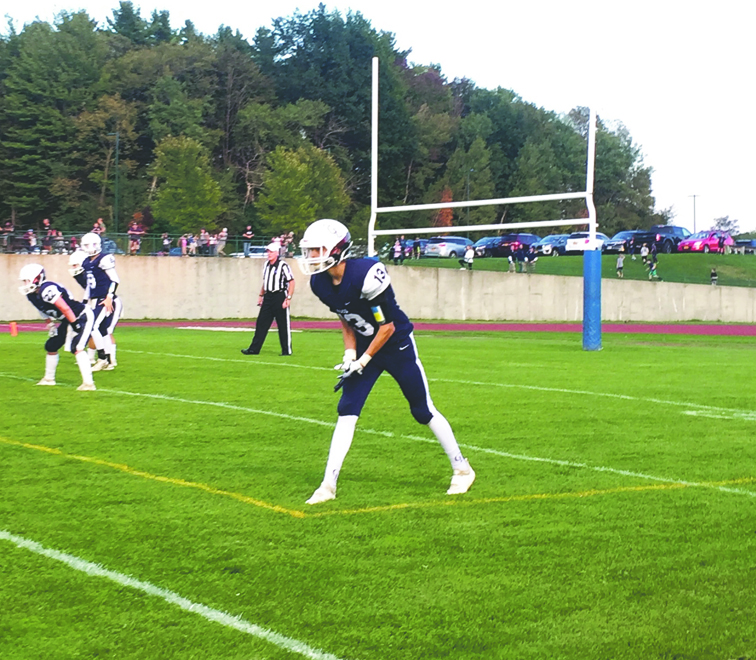 MAYVILLE — After responding to a disaster of a first quarter with two quick scores, the Thunderbirds found themselves only trailing 21-14 to Portville, oppose to 21-0. Unfortunately for Chautauqua Lake/Westfield/Brocton (1-2), the Portville Panthers (2-1) knew how to match the offensive awakening in the early second quarter. Portville closed out the second quarter with two more scores of their own and made it 35-14 at halftime.

From there, the Panthers never looked back as they stormed to a 41-20 Section VI Class C South victory at Chautauqua Lake High School on Friday night.

“We knew it wasn’t going to be easy and it wasn’t,” stated Portville Head Coach Josh Brooks. “We got up 21-0 early and they responded, but then we responded after that.”

The Panthers offense started the game rolling on all cylinders, as both the passing and running game was working against the Thunderbirds. On the opening drive, Mike Stillman connected with Dalton Tobola for a big touchdown reception. After the quick score, the Thunderbirds fumbled in short order on their opening drive and gave the Panthers great field position. Portville was unable to capitalize on the opportunity, because on the first play of that second drive Dakota Planty picked off a would be Panther touchdown.

The first quarter errors did not end there as the next Thunderbirds punt was snapped over the punter’s head and gave the Panthers field position on the Thunderbirds 5-yard line. Portville capitalized on that opportunity with a 5-yard Jayden Lassiter touchdown, the PAT was blocked and made it 13-0 Panthers on top of the Thunderbirds.

The Panthers finished off the first quarter with another touchdown run that was followed by a successful 2-point conversion, and they led in hostile territory 21-0 after one quarter.

“Early on we kind of shot ourselves in the foot,” stated Chautauqua Lake/Westfield/Brocton head coach Bryan Bongiovanni. “We had some turnovers, we didn’t execute to our potential. From the get go, I don’t think we matched their intensity.”

Trailing 21-0, Thunderbirds senior running back Ryan Jafarjian knew he needed to spark his team, and that he did. At the beginning of the second quarter, the Thunderbirds found themselves inside the Panthers red zone and they went to Jafarjian. Jafarjian first found the end zone with a 5-yard touchdown run, but he wasn’t done there. On the next Panther drive Jafarjian rose to occasion defensively and picked off the Portville quarterback inside the Panther red zone. Just a few plays later Jafarjian was back in the end zone and we had a tight 21-14 ballgame in the early second quarter.

“Ryan just has a constant motor,” stated Coach Bongiovanni. “He’s a college football player. No matter what the score is he’s playing hard. His teammates feed off of that and it’s great leadership. He’s a guy that every guy on that sideline can rally behind.”

After two drives with interceptions, Portville went back to Lassiter on the ground and it was the right choice as he helped them march down the field. The Panthers then responded to the Jafarjian scores with another TD pass to Tobola, giving them a 29-14 lead over the Thunderbirds.

“The seniors played really well,” stated Coach Brooks. “Dalton — one of our captains — two interceptions on the defensive side then two receiving touchdowns on the offensive side. We had some plays to get Dalton the ball.”

Just before halftime, the Thunderbirds looked to score and make it a potential one possession deficit. The drive was short lived when Lassiter picked off a pass intended for Jafarjian and instead it gave the Panthers a final chance to score before halftime. Portville took advantage of the field position and Lassiter was rewarded with his defensive efforts as he rushed another touchdown to get the 35-14 into halftime.

The third quarter was a battle of midfield where neither team was able to get anything going offensively because of both penalties and turnovers.

“I didn’t like the penalties,” added Coach Bongiovanni. “We have to keep our heads. Losing your temper is not going to help anything. You’ve gotta block all that stuff out and play football one play at a time.”

The Thunderbirds started the fourth quarter on the right foot with a blocked punt and gave themselves prime scoring position inside the Portville redzone. The T’Birds offense went to what was working and punched in another score with Jafarjian and made it 35-20 – preserving the hopes of a comeback.

Unfortunately for the Thunderbirds, a comeback was not in the plans as the Portville defense locked them down for the remainder of the game. The Panthers Luke Smith got the final score of the game on a short touchdown run, putting the final nail in the coffin at 41-20.

The Thunderbirds will look to get back in the win column next week when they host Cassadaga Valley/Falconer.

“We have a really young team,” stated Coach Bongiovanni. “We’ve got some really good athletes. The only place that we’re going to gain that experience is in games. So there’s going to be some bumps.”