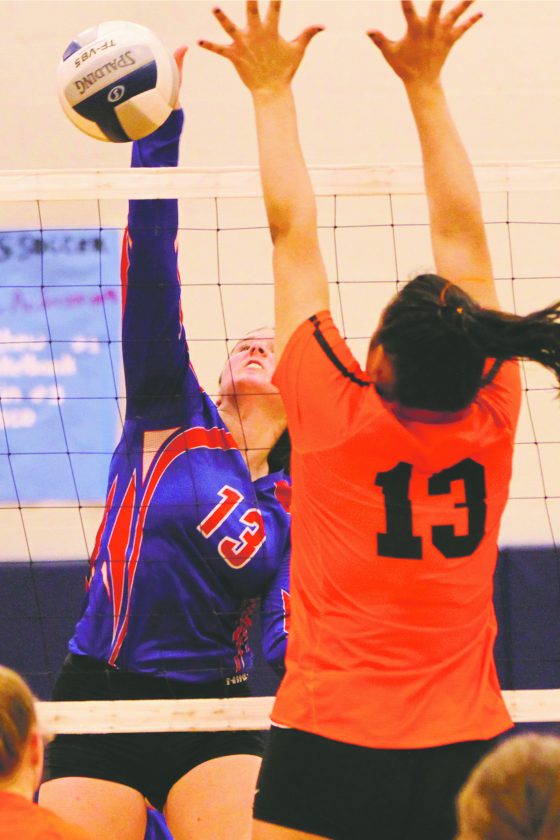 SINCLAIRVILLE — The Cassadaga Valley Lady Cougars (10-4, 10-2) were firing on all cylinders in their sweep of the Fredonia Lady Hillbillies (7-6, 7-6) volleyball team, 25-15, 25-13, 25-10 for a Section VI CCAA North division girls volleyball victory at Cassadaga Valley High School on Wednesday night.

The Lady Cougars showed early signs that they were going to be clicking on Wednesday night, as they jumped out to an early lead in the first set scoring the first five points. Fredonia soon responded with a short run of their own, but Cassadaga Valley’s early burst gave them the cushion they needed.

“It’s always nice to get that lead,” stated Cassadaga Valley head coach Denny Wakelee. “Sometimes the girls are in a hole, they put their heads down. They certainly play a lot more loose and relaxed when they get the lead. So it’s a big key for us to get that lead early.”

The two teams battled evenly throughout the first set, with Cassadaga Valley maintaining the lead, until the Lady Cougars began to pull away with an 8-2 run that made the score 18-12 and led to a Fredonia timeout. The timeout couldn’t get the visiting Lady Hillbillies back into the game as Cassadaga Valley powered to a 25-15 victory in the opening set.

“We have talked a lot about finishing the play and taking care of the ball,” stated Fredonia head coach Amanda Krakowiak. “I think that’s still where we still need to work on. We had quite a few hitting errors tonight which negatively impacted the result.”

Cassadaga Valley really started to get into a groove and an 8-4 run that made the score 16-11 in their favor called for a Fredonia timeout. The timeout could not stop the excellent play of the Lady Cougars offense as they came out of the break with a 9-2 run to finish the set, 25-13.

In the deciding third set, Cassadaga Valley got off to its best start as they went on a 6-0 run that was capped off with two aces by Kaitlyn Dahl. Dahl finished the night with two more aces for a total of four, but her night was highlighted by her season high of 28 assists.

“We watched the film of our last match and Fredonia scored a lot of points tipping to the hole to the middle. So we shifted our defense up and we got a lot more passes and that made Kaitlyn’s setting a lot better,” stated Coach Wakelee. “Just based on the number of kills we had, the hits were stronger because of the better setting that we got.”

The Lady Cougars continued to roll in the third set, jumping to a 10-1 lead at one point. In the face of defeat, the visiting Lady ‘Billies didn’t give up as they tried to battle back from the large deficit.

“The girls started out with great energy,” stated Coach Krakowiak. “You could see the heart. They were hustling and I think throughout the whole game we were consistently hustling in going after the ball and fighting for that.”

Fredonia pushed back as much as they could, but the closest the score ever got was 13-6 and the Lady Cougars never looked back from there. Cassadaga Valley closed out the victory with stellar all around play on the way to a 25-10 final.

“We always get worried against Fredonia, because we saw how well they did against Gowanda,” Coach Wakelee said in reference to Fredonia’s recent five set thriller against Gowanda. “We said they’re getting better, so we gotta keep our game up. I always tell the kids the schools don’t care if you beat them the first time around, that doesn’t mean anything.”

The Cassadaga Valley winning effort was led by Heidi Williams with six kills and seven digs, Meghan LeBaron with four kills, four aces and nine digs, Kaylee Pattyson with seven kills and Brielle LeBaron with eight kills. Cassadaga Valley will be put to the test next week as they continue to stay in the race for the division title when they travel to Gowanda next Wednesday.

Fredonia’s effort was led by Anna Valone with an ace, five kills and 11 digs and Maddy Marsh with nine digs. Fredonia will attempt to get back in the win column next Wednesday when host play Pine Valley.