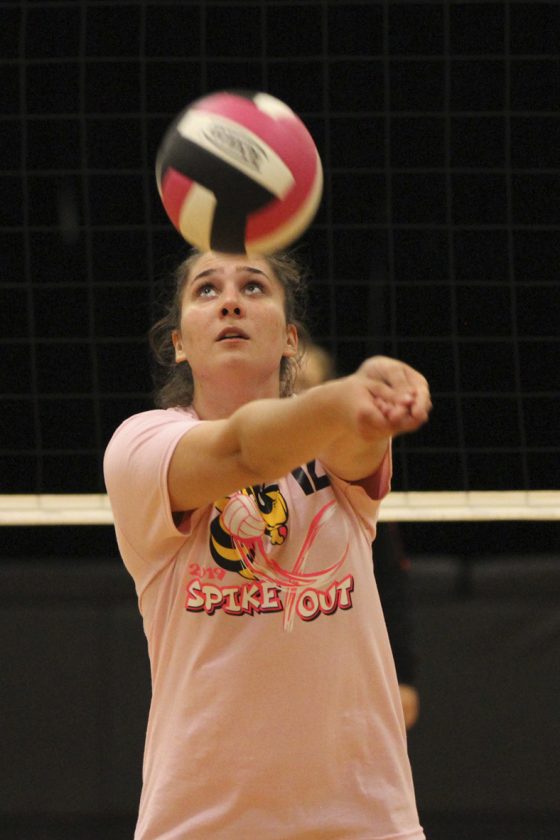 FORESTVILLE — The Fredonia Hillbillies and Forestville Hornets met for an otherwise normal volleyball game on Monday night, in which the Billies won in five sets.

The special part was the cause.

For the seventh consecutive year, and the third consecutive year featuring the ‘Billies, the Forestville Hornets held their “Spike out Cancer” game, intended to raise money and attention for breast cancer awareness. In addition to the game, there are also raffle baskets and a bake sale that go hand in hand with the game itself, in which the Hornets wear pink jerseys to top off the theme.

“I think it means so much to our community. We’ve been doing it for so long now and it’s just a great opportunity for us and Fredonia fans to come together and have a good game, but also have a good cause,” said Forestville coach Ally Knapp.

The sentiment of the game’s importance was echoed by Fredonia coach Amanda Krakowiak. 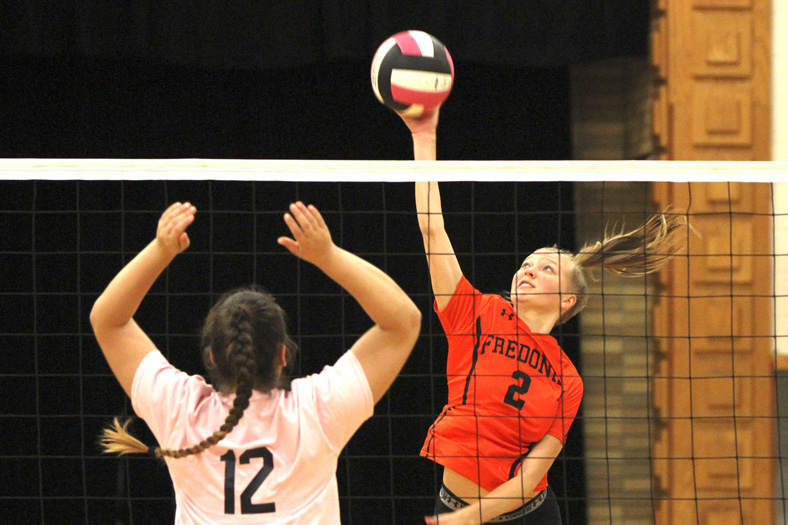 OBSERVER Photos by Lisa Monacelli Claire Lanski (2) of Fredonia goes for a kill during Monday’s match.

“This is the third year they’ve included us in this. It’s nice of them to do this with us. We’re so locally close, our parents and fans can help support such a good cause with this,” Krakowiak said.

Once the game started, the ‘Billies dominated the first set. Although Forestville scored the first pair of points in the game, Fredonia rattled off the next six in a row, then the next seven after Forestville’s next point, all amounting together for a 13-1 run that led them to a 25-14 first set victory.

The Hornets wouldn’t go down after that.

“It was a great match for the fans on a very good night for breast cancer awareness. The fans got a good show. I’m disappointed in the result but it was a good match,” said Knapp.

Forestville would find victory in each of the next two sets, which were both close, back and forth battles. The second set was a 25-21 Hornet win, in a set with the longest run being a five point run from Forestville to push the score to 16-13 in their favor. The Hornets added the last three points of the set to cap off the win and tie the score at one each. 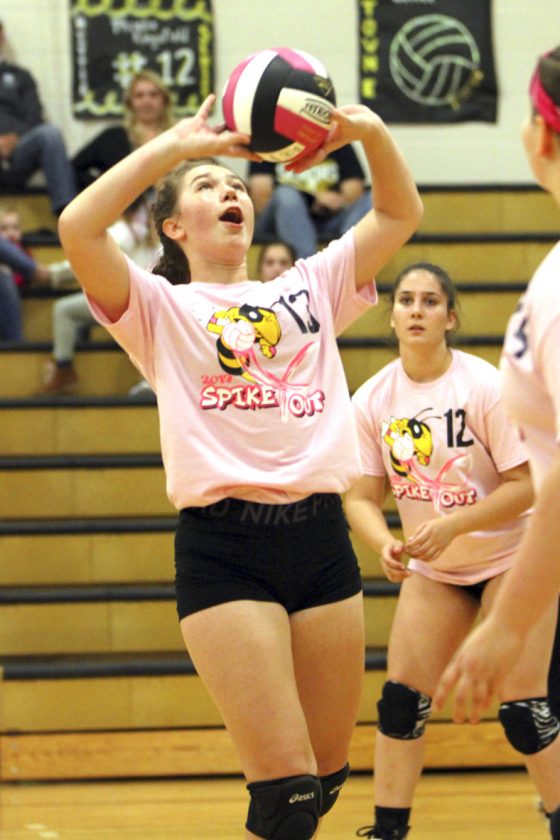 OBSERVER Photos by Lisa Monacelli Makayla Press (13) of Forestville sets up a teammate during Monday’s match against Fredonia at Forestville High School.

“The game plan was to serve and receive to the best of our ability. In set one we didn’t pass as well as we could’ve, they have some pretty tough servers and we knew that coming in. We just needed to get the first pass and be aggressive,” Knapp said.

Forestville’s aggressiveness kept going in the second half, as the Hornets kept rolling, taking the set 25-20 to take a 2-1 set edge, led by a 9-5 run to give them an 11-7 lead which they wouldn’t relinquish, putting the pressure back on the ‘Billies.

The Billies would see the pressure and grind back into it the game.

“We played a really solid first set with high intensity and high energy. I thought we did awesome there. I appreciate that they turned up the heat at the end in the last two sets and said ‘hey, we’re not satisfied walking away not winning this,’ so I appreciate that effort,” said Krakowiak.

Fredonia would win the next two sets 25-13, and 25-14, as they were able to rally around and pull out a close one, with the fourth set featuring a 10-2 run to close out the set to tie the match at two. The fifth and final set featured no truly overwhelming Fredonia runs, but rather a consistent string of play for the ‘Billies to finally close it out. That consistency is something the ‘Billies will hope to keep.

“We need to improve consistency in our energy. We got a little complacent after the first set and then we went through the motions and we let them come back. We didn’t have as much drive as we needed in sets two and three,” said Krakowiak.

Leading the way for the ‘Billies was Nagely Vazquez, who had seven aces, four kills, and two blocks, while Anna Valone had six aces, 15 kills, and seven digs, Tess Correll had an ace and 15 assists, and Maddy Marsh had 14 digs. The Hornets were paced by Madison VanZile who had four kills, while Makayla Press had 13 assists and Winnifred Kingsfield had two blocks.

OBSERVER Photos by Lisa Monacelli Claire Lanski (2) of Fredonia goes for a kill during Monday’s match.

OBSERVER Photos by Lisa Monacelli Makayla Press (13) of Forestville sets up a teammate during Monday’s match against Fredonia at Forestville High School.