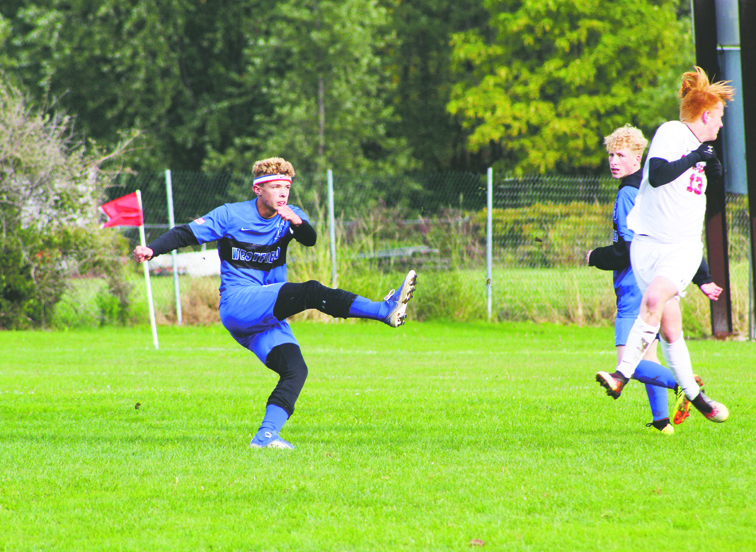 Westfield/Brocton’s Dylan Scriven follows through after clearing the ball out of his own zone during Wednesday’s game against Maple Grove. OBSERVER Photo by Braden Carmen.

WESTFIELD — The Westfield/Brocton Wolverines closed the book on the 2019 boys soccer regular season on Wednesday with a storybook ending. The boys in blue defined their season with one word: Perfect.

The Wolverines finished off an undefeated season with a 1-0 victory over the Maple Grove Red Dragons on a rainy Wednesday evening at the NorthLake Soccer Complex to claim the CCAA Central boys soccer division title.

“This is all we’ve worked for the entire season,” said Westfield/Brocton senior goalkeeper Mike Johnson. “We knew Maple Grove was going to be our biggest opponent, but we just came out here and took care of business.”

Westfield/Brocton (16-0-0, 10-0-0) entered Wednesday’s contest with only one hurdle left to clear in order to finish off the perfect season, but what a hurdle it was. Maple Grove (14-2-0, 8-2-0) had only lost to the Wolverines on the season, by a score of 1-0, in an evenly-contested showdown in the home of the defending champion Red Dragons. In the first matchup, the Wolverines were one moment better than the Red Dragons, and that was the case once again the second time around.

“They’re a great team and I congratulate them on the league,” said Maple Grove coach Cara Abbey. “They’ve played fantastic soccer this year and they should be proud.” 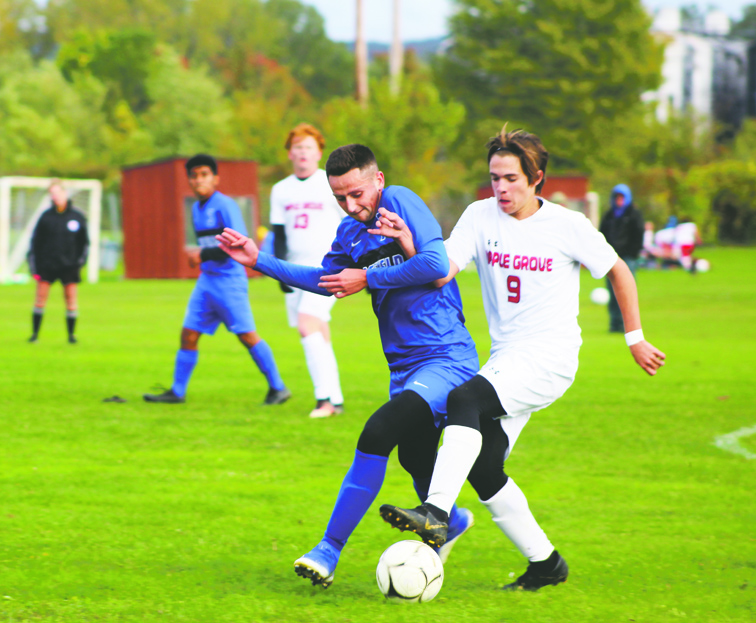 With all the pressure on the Wolverines, some of the stress was alleviated when Darien Swanson connected with Josh Heim streaking down the right sideline through the Maple Grove defense just over eight minutes into the contest. Heim snuck a shot past sprawling Maple Grove goalkeeper Andrew Auer and into the far-side bottom corner of the net for the game’s first and only tally.

While Westfield/Brocton coach Jared Winder believed the goal took the pressure off his team, even if ever so slightly, the pressure then shifted to Johnson. In Johnson’s eyes, the pressure went from needing to keep his team in the game, to instead trying to protect a lead that represented the team’s aspirations becoming reality. He did not take that pressure — or the ability of his opponent — lightly.

“I don’t think (it took the pressure off),” said Johnson of the early goal. “Maple Grove is a team that can come back from anything. They are really skilled and they can do great things. I think that’s what helped keep us motivated through the game.”

Johnson made his first save of the game in the seventh minute, then punched out a free kick at the 9-minute mark. Westfield/Brocton cleared the ensuing corner kick and avoided any damage.

After Heim just narrowly missed on redirecting a cross in the 12th minute, Westfield/Brocton made avoiding damage a theme the rest of the game. Johnson missed a bouncing ball in the box in the 14th minute, but his defense came to his aid and cleared the ball away. Two minutes later, Westfield/Brocton senior co-captain Dylan Scriven headed the ball away after Maple Grove sent it into the box. Johnson made a save on a free kick from distance in the 18th minute, then he made three more saves in the final 10 minutes of the first half to keep the score as it was. 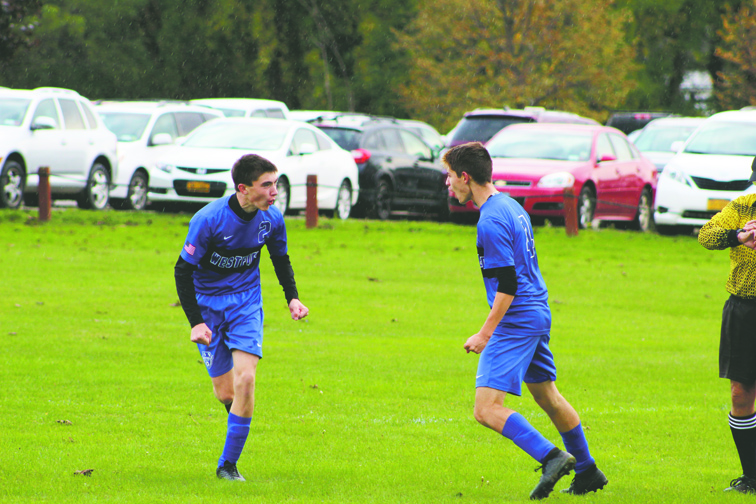 “We needed to be calm, cool and collected — but also aggressive,” said Johnson. “We had to make sure we stayed level-headed and just play our game.”

Westfield/Brocton had the majority of its offensive pressure in the second half during the first 10 minutes of the period. Nathan Culbreth, the team’s third captain along with Scriven and Johnson, had a pair of opportunities early in the frame, but neither one resulted in a goal. Josh Barresi had a quality chance with just under 17 minutes remaining in the game, but Maple Grove’s defense — which was undermanned on the back line and in net, with usual starting keeper Sam Cummings unavailable — came up big and held the Wolverines to just the one early goal by Heim.

With the way Westfield/Brocton’s defense played on Wednesday, as it has all season long, one goal was plenty. Johnson finished with 11 saves on Wednesday to secure the 13th shutout victory of the year for the Wolverines.

“He played phenomenally. Mike’s been rock-solid back there,” said Winder. “He’s had some games where it’s been pretty quiet for him because our defense has been so strong, but Maple Grove played an excellent game. They did a great job … but Mike came up with some big saves.”

The Wolverines only allowed a total of three goals all season long, and never more than one in a single contest. Only six of Westfield/Brocton’s 16 victories were even within a pair of goals, with half of the wins by more than three tallies. 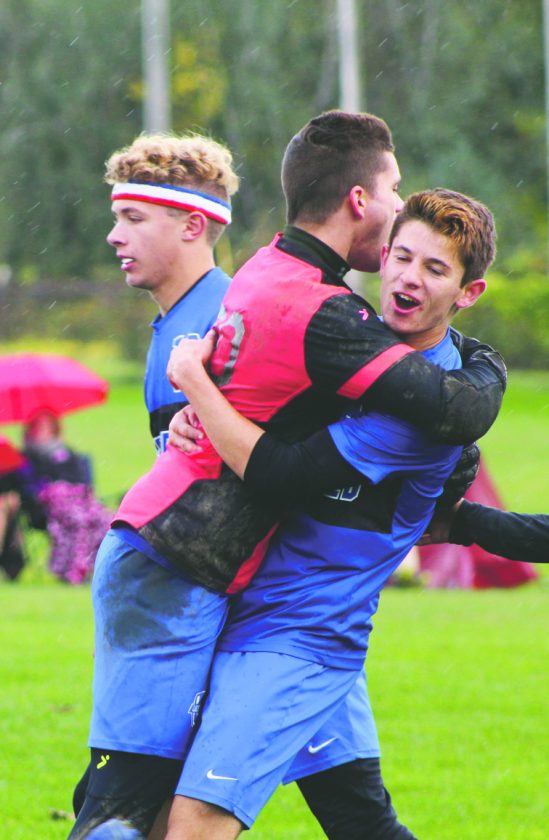 The Wolverines are almost certainly assured the top seed in the Section VI, Class C playoffs, which begin next week. Westfield/Brocton will host one game at NorthLake, before heading to a host site further along in the bracket, should they advance. That may seem like a foregone conclusion with how successful Westfield/Brocton has been, but the Wolverines aren’t taking any chances.

“We have a good chance to do something special here,” said Winder. “I fully expect we might have to play Maple Grove a third time. … But the postseason is a whole different game, everyone is 0-0. You can’t carry any wins with you.”

“Now we start the second season,” added Johnson. “We can’t look back on this game forever. We’re league champions and that’s great, but as the new season starts, we need to keep a level head and to look straight ahead.”

Maple Grove should still receive a favorable seed in the Class C bracket, as well. The Red Dragons are hopeful that they will get a third shot at the new CCAA Central division champions.

“Moving into playoffs, I’m extremely confident with my guys. I have a team of hard workers that can take a game like this and learn exactly what they need to from it,” said Abbey. “We’ve seen what we need to see to be prepared for the playoffs.”

With both teams seeded near the top of Class C, a potential rematch would likely come in either the Sectional semifinal or the Class C title game.

“Honestly, they can have this game. They can take it,” said Abbey. “They’ll probably remember last year, when they said ‘It’s hard to beat a team three times’ … and that’s fine. When we see them in the playoffs, it’s going to be hard for them to beat us a third time.”

For a first-year coach like Winder was this year for Westfield/Brocton, a perfect regular season is as good of a start as anyone could dream of. While the next chapter — the playoffs — is about to begin, the first chapter in his story at the helm of the Westfield/Brocton Wolverines couldn’t have been scripted any better.

“This group of guys is a special group,” said Winder. “They accepted me with open arms. We didn’t come in, me and my assistant coach Andrew Webster, to try to re-invent the wheel. Coach (Jay) Pikiewicz had established a winning program and a winning culture. We just tried to let it continue and these kids kept it going. … This is a testament to this group of kids for sticking to the plan and following through. It’s all about the kids. Without them being as great as they are character-wise, effort-wise, we’re not here.”

Westfield/Brocton’s Dylan Scriven follows through after clearing the ball out of his own zone during Wednesday’s game against Maple Grove. OBSERVER Photo by Braden Carmen.