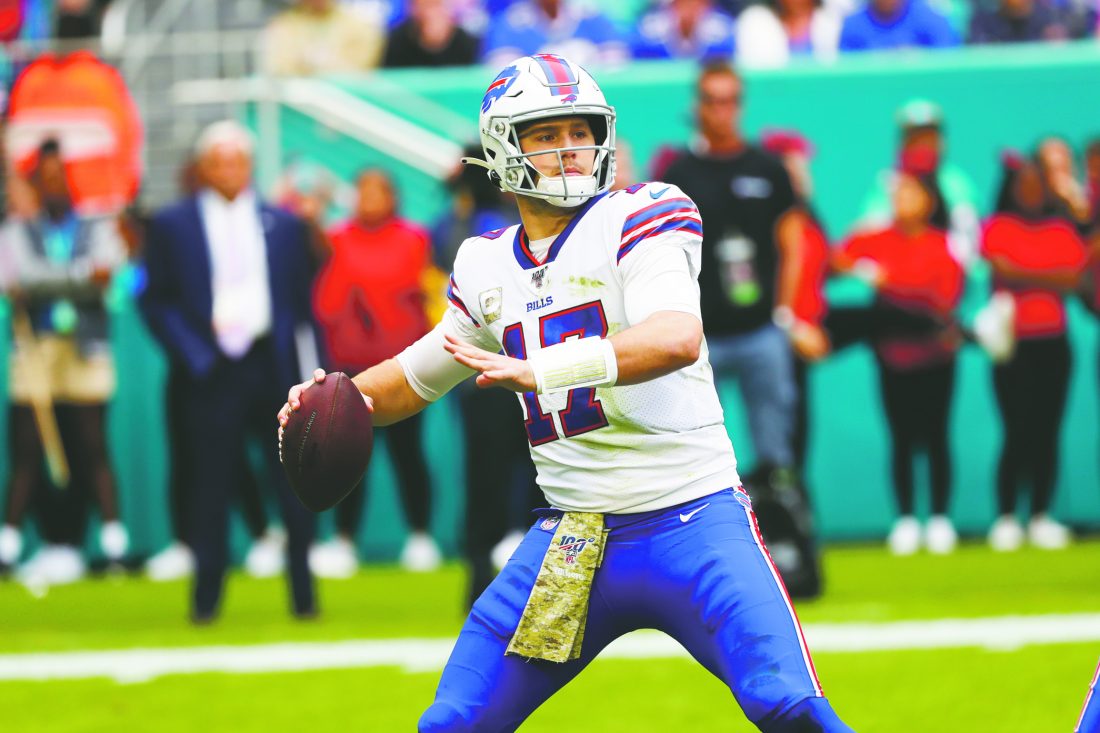 Buffalo Bills quarterback Josh Allen (17) looks to pass, during the first half at an NFL football game against the Miami Dolphins, Sunday, Nov. 17, 2019, in Miami Gardens, Fla. (AP Photo/Wilfredo Lee)

Finally, a win that felt like a win. The Buffalo Bills faced a Miami Dolphins team that they should beat easily and they actually took care of business. The biggest reason why was a stellar day from quarterback Josh Allen.

Sunday was the best performance of Allen’s career. The second year pro accounted for four touchdowns and no turnovers, featuring a deep ball to John Brown and ball security that we’ve rarely seen from Allen in his career. Allen threw for 256 yards and three touchdowns on 21-for-33 passing, which amounts for a QB rating of 117.7. He added seven carries for 56 yards, including a 36-yard carry and an 8-yard rushing touchdown early in the second half. Allen’s impressive day was highlighted by solid numbers both through the air and on the ground, a completion percent of 63.6 that isn’t bad enough to be a problem, and most importantly, not making any mistakes. Allen found Brown over and over again, to the tune of nine catches for 137 yards and two touchdowns.

Allen also connected with his tight end Dawson Knox for a 23-yard touchdown and utilized his running game, as Devin Singletary had 15 carries for 75 yards (though he did have two fumbles, but neither was lost). This game was the first time in his two-year career where it seemed like Allen put it all together, and the result backed it up.

“That was our best game,” said Brown after the game, who also admitted the team has an even higher ceiling. “But we haven’t played our best game yet,” he added.

Many fans and critics have been harsh on the Bills this season, even after a win. The reason why is because it didn’t feel like this one did. For the majority of the season, the Bills played bad teams and did just enough to win. This time, however, the Bills did what a good team does to a team like the Dolphins who, despite a two-game winning streak, are not a good team. Buffalo beat Miami from start to finish and always appeared in control, which is something the Bills couldn’t boast after narrow wins over the winless Bengals, the Jets, the Titans, the Giants and the Dolphins the first time, in Orchard Park. Even the 24-9 victory over Washington didn’t feel dominant, especially after giving up 100 yards on the ground in the first half. None of those games felt the way this week’s win felt, and that’s why it’s tough to find much to complain about.

Were there still flaws? Yes, like giving up an onside kick and a 101-yard kickoff return touchdown. But those flaws never took away from the feeling that the result was already in-hand. The Bills were the better team before the game began and they finally played like it, especially at the quarterback position. That’s a good sign for next week, as Buffalo returns home to host another team they should be able to beat, the Denver Broncos, in Week 12.

While the old saying goes, “Winning fixes everything,” what the Bills have experienced so far this year is “Winning still draws scrutiny if you don’t look good doing it.” This week, though, the win was finally pretty enough to silence most of the harshest critics.