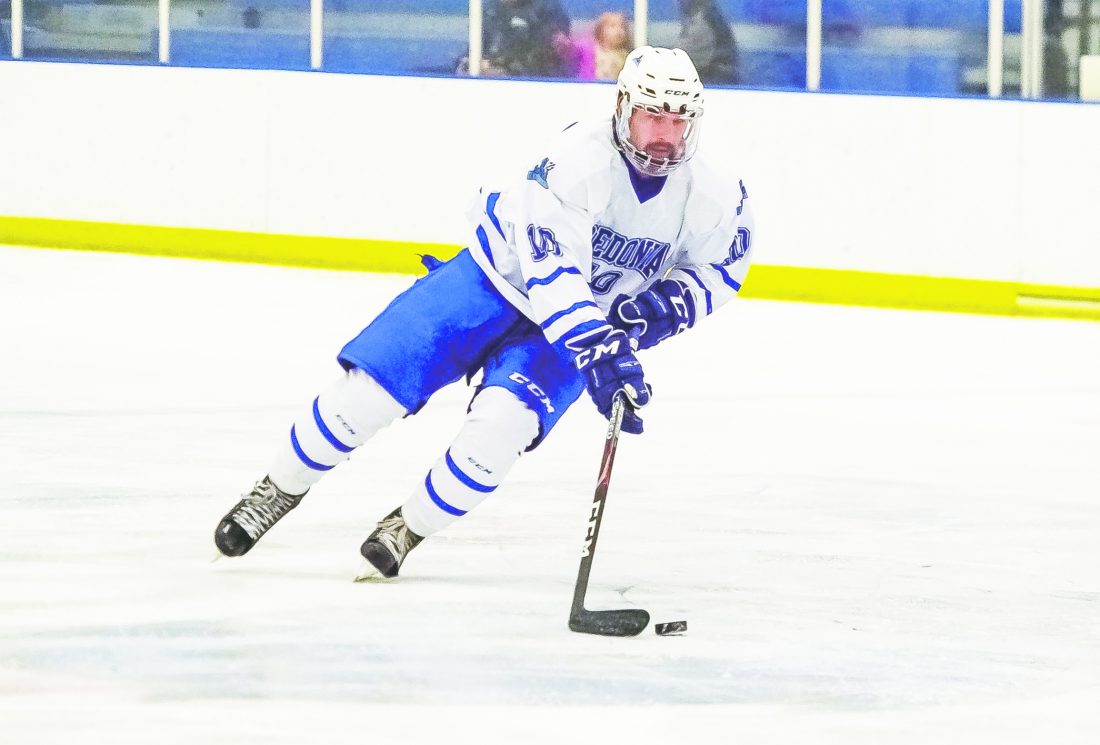 With little time remaining in a 3-3 SUNYAC hockey game between the Fredonia State Blue Devils and the Brockport Golden Eagles, Brockport’s Doc Gentzler settled down a puck at the left point. He took a quick look before firing a shot pass to Jordan Renaud in the low slot that just trickled past Anton Rosen for the 4-3 lead that silenced the crowd at Steele Hall Arena in Fredonia. Instead of giving in to the late goal, the Blue Devils picked up their heads and gave Brockport (5-2) all they had.

Fredonia State (1-4-1, 0-4-1) soon found themselves with an offensive zone faceoff with 1:38 remaining in the game. Anton Rosen joined his teammates on the bench for the extra attacker. While the extra attacker helped keep the pressure on late, the Blue Devils were unable to get one past the defense and Matt Schneider in net to fall 4-3.

“I liked our battle, I liked our fight,” stated Fredonia State head coach Jeff Meredith. “I just talked to them… just coming off a tough game like that, so they’re probably not interested in hearing about the positive, but there were a lot of them.”

In the early going of the first period the Blue Devils played a little sloppy — struggling in both the neutral zone and on the breakout. Brockport took advantage of that by applying good pressure on the puck in the forecheck. Brockport’s early speed led to a Fredonia State penalty as Anders Johnson tripped the puck carrier who beat him to the outside on the zone entry.

“I think the slow start was because we just didn’t manage the puck in the neutral zone,” stated Meredith. “We’re turning it over and they’re coming back at us fast.” 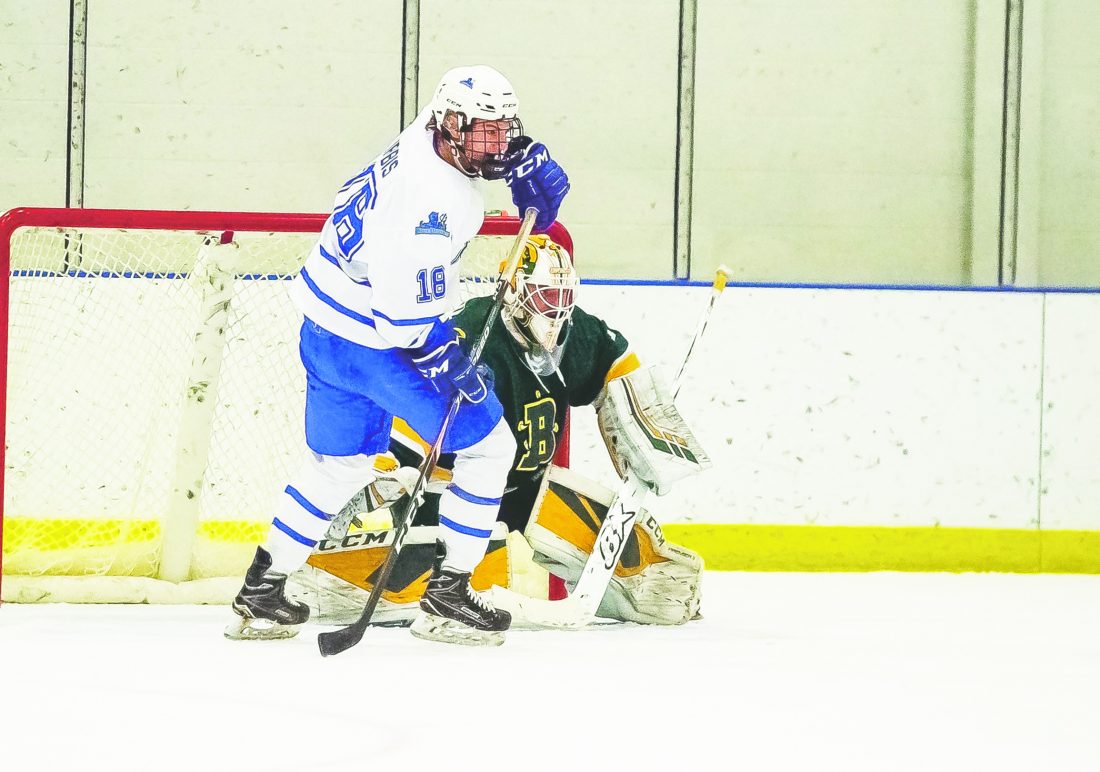 The Blue Devils had a strong penalty kill and seemed to get a boost from it. Shortly after the kill, Fredonia State found its best chance with a shot that grazed the crossbar. The Blue Devils continued to work to get chances and it paid off as Ryan Dunner slammed a puck home on the wrap-around with the assist going to Jacob Haynes and Fredonia State took the 1-0 lead with 11:08 remaining in the first.

Fredonia State continued with the offensive pressure, but Brockport still managed to strike back after getting an odd man rush that Shane Visnick kept and put past Anton Rosen in net.

Fredonia State took another penalty shortly after the goal, but once again killed it with ease.

On a seemingly harmless transition up ice along the boards, Blue Devils’ defenseman Johnson threw a hard dump on net that beat Brockport goaltender Matt Schneider and gave Fredonia State the 2-1 lead.

Brockport, once again, managed to get it right back as Jeremy Solat blocked a shot and split the defense for a breakaway. Just a stride ahead of the defense on the breakaway, both defenders hooked Solat, but it was not enough as he bursted in to slip one five-hole on Rosen and tied it 2-2. 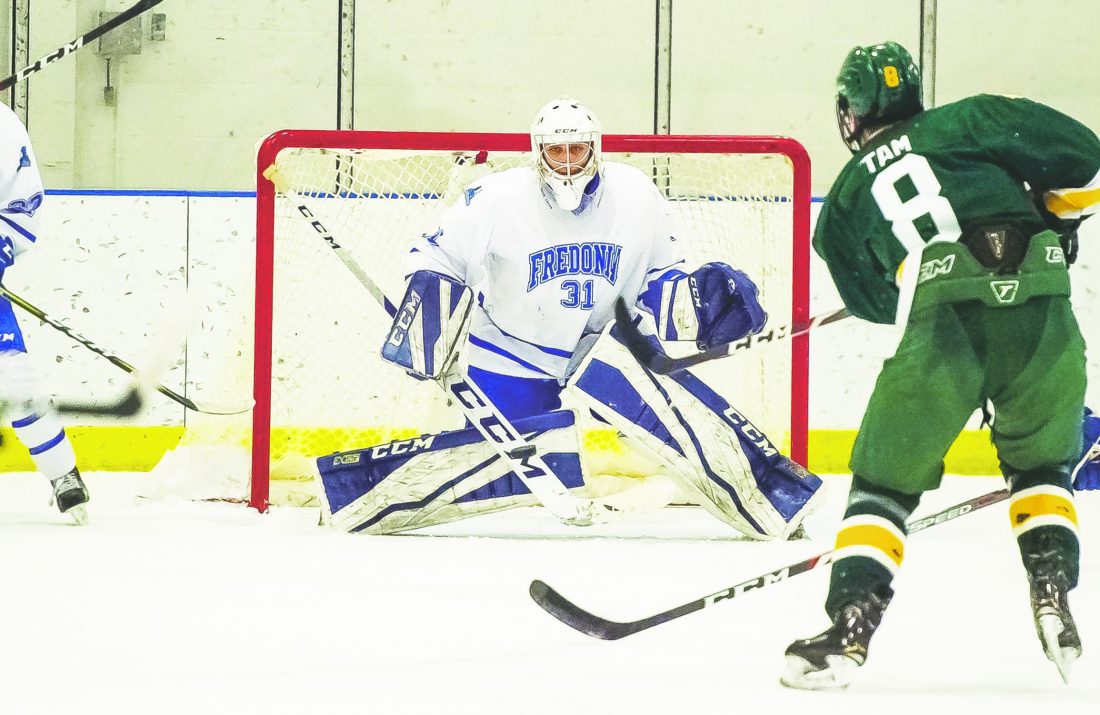 “The first two I think we gave them up for free,” said Meredith. “We turned one over at the blue line then we made a soft play from the wall to the middle and it got picked off and went the other way. That’s free… make them work for it.”

After one period of play the game was tied, but it looked like Fredonia State was getting better as the game wore on.

“I have no issues with how we played hockey,” said Meredith. “We played good hockey. I thought that once we started getting pucks in deep and going north with it we were okay.”

The goal against didn’t take the momentum away from Fredonia State, as they continued to play their game. Fredonia State added more physicality to the game, powered by some big hits courtesy of Victor Tracy. Tracy got booked for one of his big hits, but the penalty kill came through again. At the end of the penalty kill Fredonia State generated a good rush up ice that yielded a nice chance at net, but even better saw a Brockport defender get a roughing penalty.

The Blue Devils special teams units got right to work as early into the powerplay, Tracy hit Ethan Kirbis in the neutral zone with a pass, Kirbis used his speed and dangles to fly past the Brockport defender and quickly snapped a wrister top corns over the glove and tied the game at 3-3.

“It was good to see the powerplay get one,” Meredith noted about the special teams. “We really need that from them. Like I said penalty kill has been pretty good, but we just can’t be on the kill that much.”

Brockport continued to respond poorly to the Blue Devils physical play as late — shortly after another huge Tracy hit — a Golden Eagle made their way to the penalty box on a dumb slashing penalty.

Fredonia State entered the third period tied, 3-3, but with a chance to go up on the powerplay. Tracy came close to grabbing the lead, but Schneider dove across the crease to deny the effort and kept it tied.

After the powerplay, neither team seized control of the game as it was very back and forth with no big chances. Fredonia State was sent to the powerplay once again due to a Brockport slashing, but the Blue Devils were denied again.

Halfway through the period Brockport started getting some good possession again, but saw no big chances. Until, with about six minutes remaining, Rosen made the save of the game as he found himself one-on-one again with Jeremy Solat who beat him earlier five-hole. Solat tried a similar move again to open the wickets, but Rosen wouldn’t be fooled twice as he turned away the shot and kept the game tied.

With just over two minutes remaining, Brockport’s Gentzler found himself with some time at the left point and fired a shot pass to Renaud in the low slot that just squeaked past Rosen. Fredonia State put on a strong effort even the game late, but came up empty handed.

The Blue Devils will look for their first SUNYAC win tonight when they travel to undefeated SUNY Geneseo (5-0-1, 3-0-1) at 7 p.m.