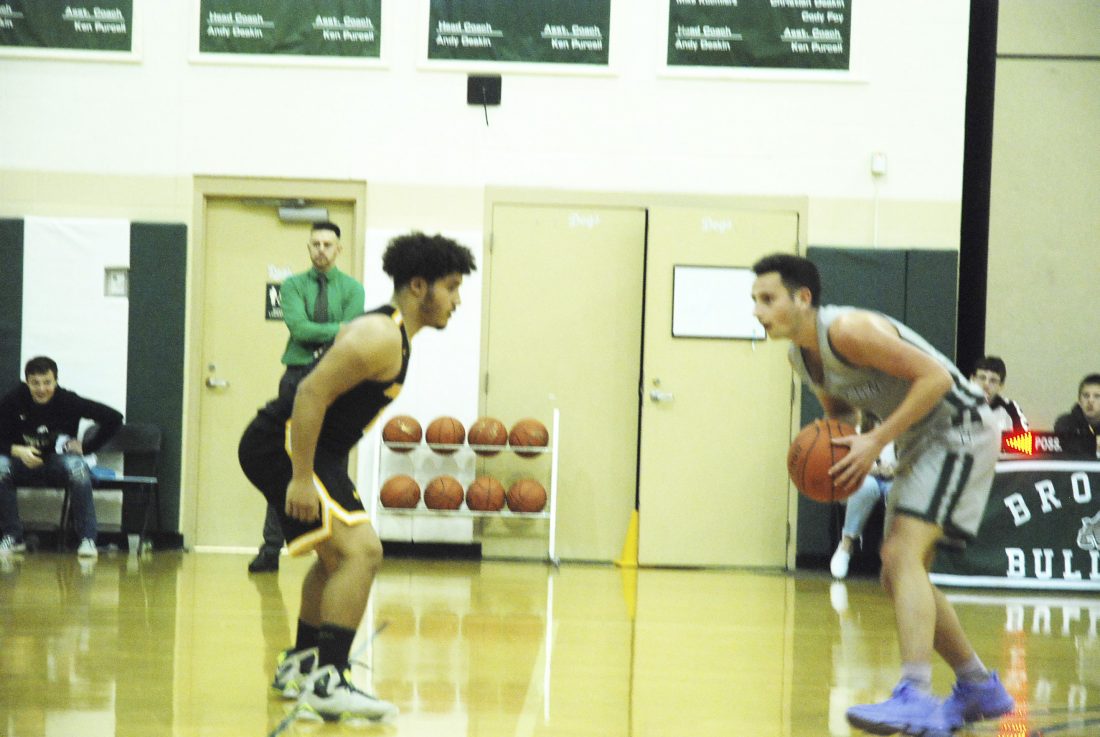 BROCTON — Up 35-33, the Forestville Hornets were 1.8 seconds away from their first victory of the season in Brocton. The Hornets needed just to inbound the ball and dribble out the last second, but instead an unthinkable error occurred when Angel Caraballo put a layup into his own basket to beat the buzzer and tied it at 35-35, sending the Brocton High School gymnasium into complete pandemonium.

The Hornets stung themselves late in regulation to force overtime, but luckily for them they were able to bounce back and hit huge free throws in overtime to get the 42-38 victory in one of the most unusual endings to a high school basketball game.

“Obviously it’s a tough situation what happened there,” Forestville head coach Jon Feniello said about the end of regulation. “He mistakenly scored. Afterwards instead of putting our heads down we persevered through there. It took a little talk to get through it and the boys battled really hard.”

The start of the game was extremely slow as the only point scored in the first couple of minutes of play was by Dalton Hastings of Forestville at the foul line, 1-0.

Early on, much of the battle was in the paint as both teams struggled to hit shots and finish second opportunities. Both teams certainly displayed a little rust and showed signs of figuring out big minutes of varsity basketball. After one quarter of play it was 7-2 Forestville.

In the second quarter, the Bulldogs looked like they woke up offensively as the intensity picked up. Early buckets and strong defensive play from Michael Steward and Seth McFadden saw Brocton quickly take the lead, 8-7. Forestville also made big defensive plays in the second quarter, getting steals at the top of key that led to fast breaks, but the Hornets continued to struggle to finish plays. A lot of Forestville’s success was found when driving to the basket and drawing the foul.

Brocton looked to be the better team in second quarter, but Forestville would not go away. Near the end of the quarter, Brocton called a timeout for one last play, the Bulldogs moved the ball around the horn and found Gabe Morello on the wing for a late 3-pointer to go up 19-15 at halftime.

The intensity grew into the third quarter, with both teams getting very physical as much of the play occurred down low. The physical play saw plenty of fouls called and it soon got the Bulldogs in trouble as both McFadden and Steward neared fouling out. With a lot of game left, Steward reached four fouls and forced him to the bench to preserve him for the fourth quarter.

“Mike Steward and Seth McFadden all had fouls early on,” stated Mulcahy. “It kind of forced my hand a little bit where I had to go into my bench earlier than I wanted to.”

Forestville took advantage of Brocton’s foul trouble and pushed the issue by continuing to drive the paint and draw more. Forestville’s Gage Davis found a lot of success dribbling hard into the paint and getting and-one’s. Davis finished the game as the Hornets leading scorer with 15 points, along with seven steals.

“Gage Davis, he filled in at point guard,” stated Feniello. “He was point guard all of 10th grade for me on JV team, so he really knows how to run the point. He does a good job of seeing the floor and being able to run through things.”

After the big guys fouled out for Brocton in the early fourth quarter, it looked like the Hornets would be able to hold off the Bulldogs for their first victory of the season… until the unthinkable happened. As time was expiring, with a two point lead 35-33, Caraballo put the inbound pass into his own basket to force overtime.

Instead of giving up after a blunder like that, Caraballo and his team rallied together in the overtime period. After going down first on a Morello shot, Jake Smith tied the game on a shot then Hastings and Davis took over from there. Both Hastings and Davis combined for five free throw points as the Hornets won 42-38.