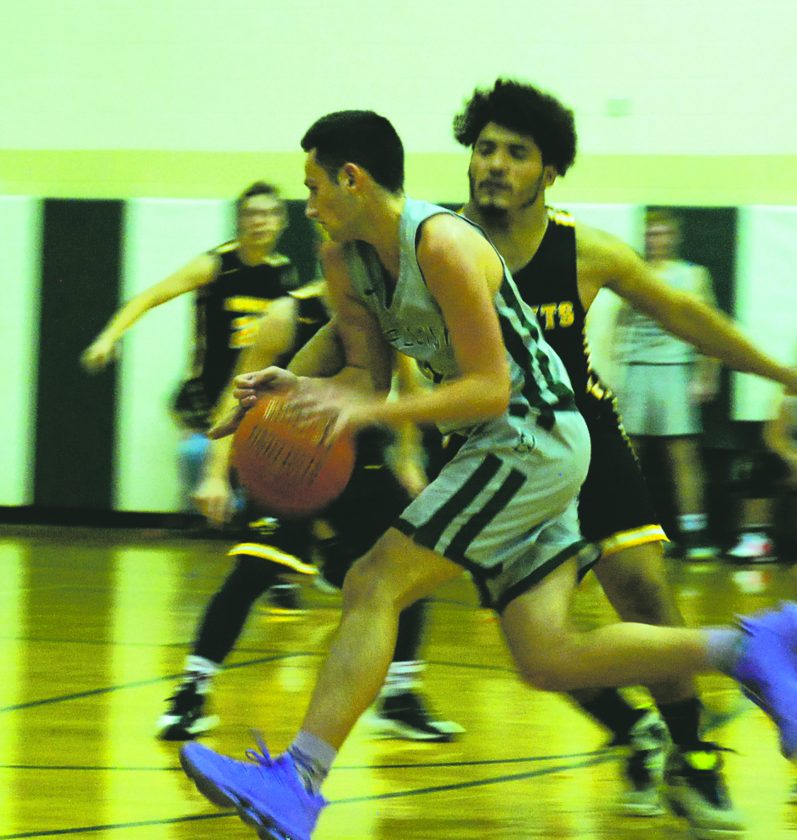 OBSERVER File Photo Above, Brocton’s Gabe Morello drives toward the basket during a game against Forestville earlier this season. The Bulldogs earned their second consecutive win Thursday night in Falconer, 52-49.

FALCONER – Brocton rallied in the final minute and Falconer missed a desperation 3-pointer at the buzzer as the Bulldogs beat the Golden Falcons 52-49 in nonleague play.

Falconer was up by three points with 1:30 left and by one with a minute left before Brocton rallied. With the Bulldogs leading by one with six seconds remaining, the Golden Falcons missed a pair of free throws and were forced to immediately foul. At the other end, Brocton made both free throws before Falconer missed a potential game-tying shot at the buzzer.

The loss wasted a starring performance by the Golden Falcons’ Nick Erickson, who scored 31 points on 10 3-pointers. Jaquez Thomas added 10 points, 10 assists and seven rebounds in the loss.

SOUTH DAYTON — The Pine Valley Panthers (1-2) continue to go through growing pains, as they fell to the Panama Panthers, 74-47, on Thursday at Pine Valley High School in a Section VI non-league boys basketball game.

Pine Valley was able to keep it close through a quarter of play, only trailing by two points after one frame, but in the second quarter, Panama (1-0) pulled away, outscoring Pine Valley 22-10 in the second. Pine Valley, as many teams do, struggled to contain Panama star Cameron Barmore, who put up 38 points and 12 rebounds. Pine Valley coach Mark Mansfield knew Barmore would be an issue.

“The guy I had guarding him did a heck of a job, but when Barmore gets out in transition there isn’t much you can do,” Mansfield said.

Gerrit Hinsdale added 13 points, 14 rebounds, and six assists for Panama, while Pine Valley was led by Wayne Libby’s 18 points and seven rebounds, while Bryce Sercu had 10 points for Pine Valley.

Pine Valley will next be in action on Wednesday, Dec. 11, as they’ll take on Falconer, while Panama will take on the Forestville Hornets on Monday, Dec. 9.

HOLLAND — The North Collins Eagles boys basketball season got off to a tough start as they fell to the Holland Dutchmen, 62-31, in a Section VI nonleague boys basketball game at Holland High School, on Thursday night.

The North Collins (0-1) effort was led by senior Tyler Robinson who had a game high 14 points and Anthony Puntillo added five more points for the Eagles.

Holland (1-0) was led by a trio of double-digit scorers in Jon Nellis with 14, Josh Ostrowski with 11 and Noah Kirsch with 10. Mark Lewandowski added nine points, five assists and seven rebounds and Tyler Scheffler grabbed 12 rebounds.

The Eagles are back in action tonight in Portville and hope to bounce back for their first win of the season.