Fredonia gets handled on the court in Panama, 61-36 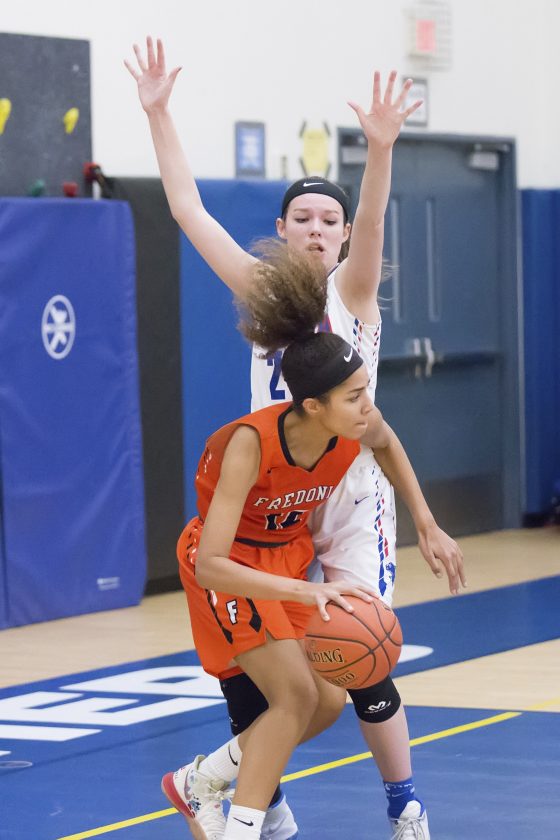 Photo by Debbra Bailey. Fredonia’s Anna Buchanan dribbles in the paint while being defended by Panama’s Kylie Schnars.

PANAMA — One hundred wins as a rule isn’t a major accomplishment for a high school basketball coach.

But when that centennial victory comes in the first game of a coach’s sixth season on the bench, the milestone becomes a little more special.

Since taking over the varsity program at the start of the 2014-15 season, Angeletti’s rather fast ride to 100 wins has included several highlights that take even the most veteran coaches decades to reach – if they do at all.

“I attribute it to the kids, the community, the dedication and the passion,” Angeletti said postgame. ” … This community has been there the whole way. You’ve seen it at states and regionals. This community, no matter what sport, they are going to support these kids.”

Lenart surpassed 1,000 career points that season – becoming the first Panama girl to reach the milestone – and was the Panthers’ all-time leading scorer when all was said and done.

“I was jayvee coach for five years prior to that and I knew we were building something special,” Angeletti said. … The stars aligned perfectly. … It was just one dream after another.”

The 2015-16 squad went 21-5, making it one step further than the previous year before losing to Heuvelton in the state final. Senior guard Emilee Sperry and Taylor Bowen led that team.

“They made a lot of 3s,” Angeletti said of Bowen and Sperry. “Each year we’ve kind of had a different style. Now we are kind of a post presence, then we were a perimeter presence.”

Another 20-win season followed in 2016-17 as the Nicole Johnson-led Panthers again lost to Heuvelton in the state final.

“Nicole, the patented right-hand hook. … She probably took about 20 charges that year,” Angeletti recalled about the third state final team. ” … She needs to be a coach. She’ll be an excellent coach.”

All told, Panama is now 100-20, including three Section VI titles and three Far West Regional crowns in Angeletti’s five-plus seasons on the bench.

The 47-year-old Angeletti doesn’t remember his first varsity game on the bench – for the record it was a 73-15 win over Forestville during which Madalyn Bowen scored 17 points, Lenart had 14, Sperry had 12 and Taylor Bowen had 11 – but said his most memorable win was the 2017 Class D title game. Panama tied that game late in regulation before outscoring Franklinville 20-9 in overtime to advance to its third straight Far West Regional and eventually third straight state Final Four.

“We ran an overload, a high-low play. We were looking to dump it to Nat and everyone double-teamed on her. Nicole’s girl even came over, so we gave Abi a fake pass and finished with a layup to tie the game. … We went to overtime and won it,” Angeletti said. ” … That’s probably the one that stands out.”

Thursday night’s tilt was over by halftime as Panama built a 31-11 lead.

Despite getting a late start to the season due to the Panthers volleyball team playing in the state Final Four Nov. 23-24, seniors Kylie Schnars and Natalie Angeletti were up to their old tricks.

“She can knock down a shot so you have to get out on her,” Coach Angeletti said of Schnars. “Kylie has a natural knack to find the opening in the zone.”

“They ran the floor well,” Fredonia head coach Dan Vona said of the Panthers. “We need to get a little better at running the floor and conditioning.”

The Hillbillies played their best basketball in the final quarter, scoring or getting to the free throw line in each of their final eight possessions.

“In the last two minutes, we were in a deficit and we closed it a little bit by freeing ourselves and just playing basketball,” Vona said. ” … We have the ingredients. … They are good plays. When they run them … they work.”

But by then it was too late to keep the Panthers from getting Angeletti’s 100th win and this year’s team’s first victory of the season.

“We did what we needed to do,” Angeletti said.