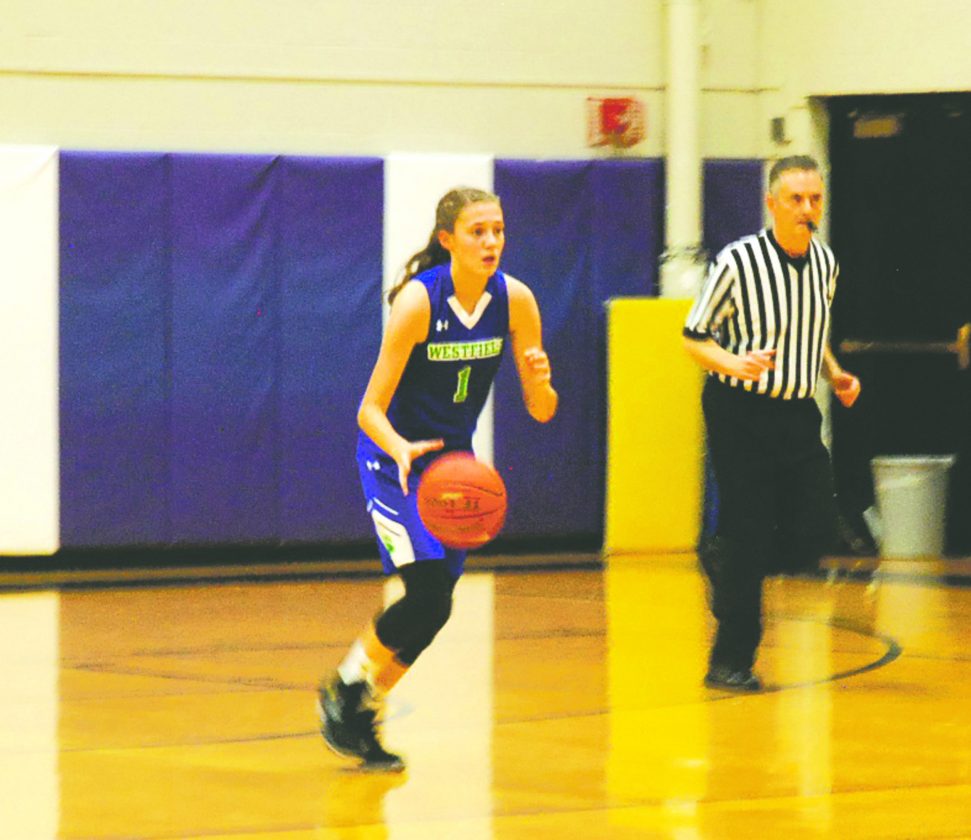 OBSERVER Photo by Anthony Dolce Above, Westfield/Brocton’s Katie Bodenmiller dribbles the ball upcourt in Monday’s game at Pine Valley Central School. Bodenmiller led the Lady Wolverines in scoring with 17 points as they cruised to a 53-32 victory over Pine Valley.

SOUTH DAYTON — The rust might still be on Katie Bodenmiller and the Westfield/Brocton Lady Wolverines early in the season, but they may have taken a step to shaking it off on Monday night. The Lady Wolverines won handily over the Pine Valley Lady Panthers, 53-32 in Pine Valley.

“We just played in the Cassadaga tournament, which was a fun tournament,” said Westfield/Brocton coach Dave Mathews. “We played with good intensity in that tournament but couldn’t make a basket so tonight was nice to see. We got beat here bad last year so I think the girls remembered that and wanted to prove they could do better.”

Bodenmiller, playing just her third game of the year after taking off a year of basketball last year, looked much like her old self, scoring 17 points on the game, nine of which came in the first quarter. Mathews is happy to have Bodenmiller back in the lineup.

“She is special,” Mathews said. “She makes everyone else better, she’s one of those kinds of players. She’s still knocking the rust off after not playing last year. Even though the tournament we played was a little rough for us, we’re going to get better.”

With the game tied at two in the early stages of the first quarter, the Lady Wolverines ended the quarter on a 13-0 run, of which Bodenmiller was the catalyst, scoring seven of her nine first quarter points on that run.

Holding a 15-2 edge at the end of the first quarter, the Lady Wolverines kept up the pace in the second. While the two teams were even for the first part of the second, Westfield/Brocton found themselves on another 8-0 run, spearheaded by a Mary Conklin lay-up, on a home run stretch pass from Bodenmiller to hit Conklin in stride.

The Lady Wolverines dominance continued in the second half, as the offense got more in a rhythm, with Bodenmiller taking a backseat. Instead, it was Mary Conklin and Haleigh Dellow who stepped up for the Wolverines, which is something Mathews was happy to see. “Haleigh Dellow is a lot like Katie,” Mathews said. “She’s only in ninth grade, but she’s really going to be good. She’s already showing she belongs out there. She’s an excellent rebounder, deceivingly fast, and a good defender. And Mary is probably my best defender, she just needs to move her feet instead of reaching. But she’s really good.”

The Lady Panthers had the scoring edge in the fourth quarter, outscoring the Lady Wolverines, with Sadie Fadale leading the way, as she did for all Pine Valley scorers with six points.

The Lady Wolverines, outside of Bodenmiller’s 17 points, were led by Conklin’s 12 points and Dellow’s six points.

Coming off this victory, the Lady Wolverines have a tough task coming back home from Pine Valley, as they’ll see the Silver Creek Black Knights visit, which will certainly be a tall task for Mathews and his team.

“To get this win then go home is a good scenario for us,” Mathews said. “We’re hoping to shoot a little better at home but it should be a good performance for us. We shot the ball a little better today, our first game against Falconer was atrocious, we couldn’t throw it in the ocean, but it looks like we’re getting better.”

The Lady Wolverines (1-2) will host the Black Knights on Wednesday, while the Lady Panthers are next in action against the Falconer Golden Falcons on Friday.