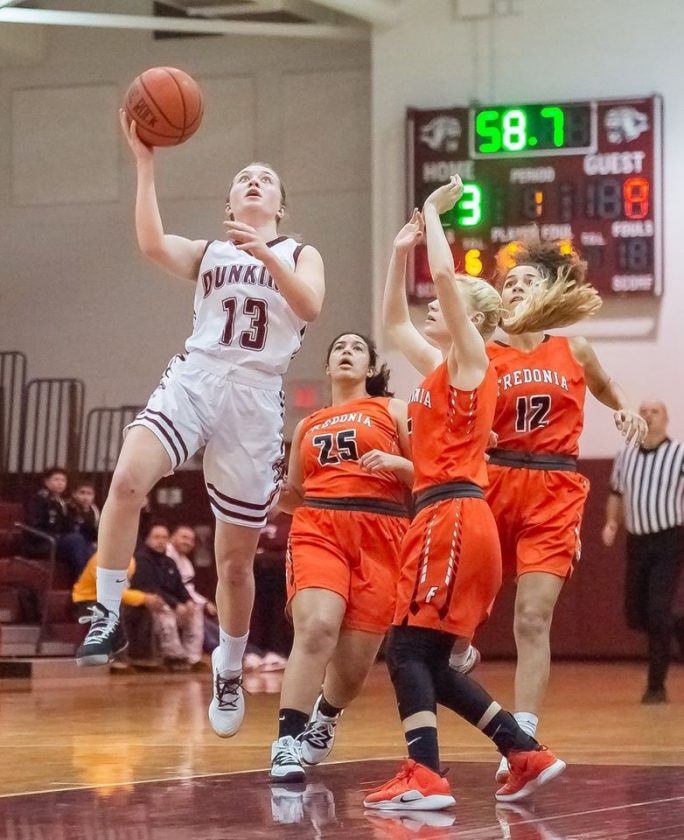 OBSERVER Photo by Ron Szot Dunkirk point guard Jessica Beehler (13) drives by the Fredonia defense for a layup in the first quarter of Dunkirk’s 96-62 victory over the Lady Hillbillies on Monday night at Dunkirk high school in CCAA West 1 Division girls basketball action.

Monday’s rivalry showdown between Dunkirk and Fredonia was billed as a battle of two different styles, between the high-powered offense of Dunkirk and the tough defense of Fredonia.

By the time of the final buzzer, there was no doubt which style won the battle.

The Dunkirk Lady Marauders ran all over the Fredonia Lady ‘Billies for the second time in the past three meetings, with a 96-62 Dunkirk victory in Monday’s rivalry showdown in the CCAA West 1 Division, at Dunkirk High School.

Referencing his five senior starters after the game, Dunkirk coach Ken Ricker said, “This is nice for me to see. That’s why I’m here, to see them do something special that they’re going to remember.”

Dunkirk senior point guard Jessica Beehler and the rest of the Lady Marauders did just that on Monday. As one of the most under-appreciated players in Western New York, leading the high-powered Dunkirk offense all season long, Beehler came into the game with three triple-doubles on the season. On Monday, she nearly did one better. Beehler fell just two rebounds shy of a quadruple-double, as she racked up 13 points, 11 assists, 10 steals and eight rebounds to carry the Lady Marauders to victory. Nadara O’Dell led the Lady Marauders in scoring with 32 points, while Kymi Nance had 29 points of her own. 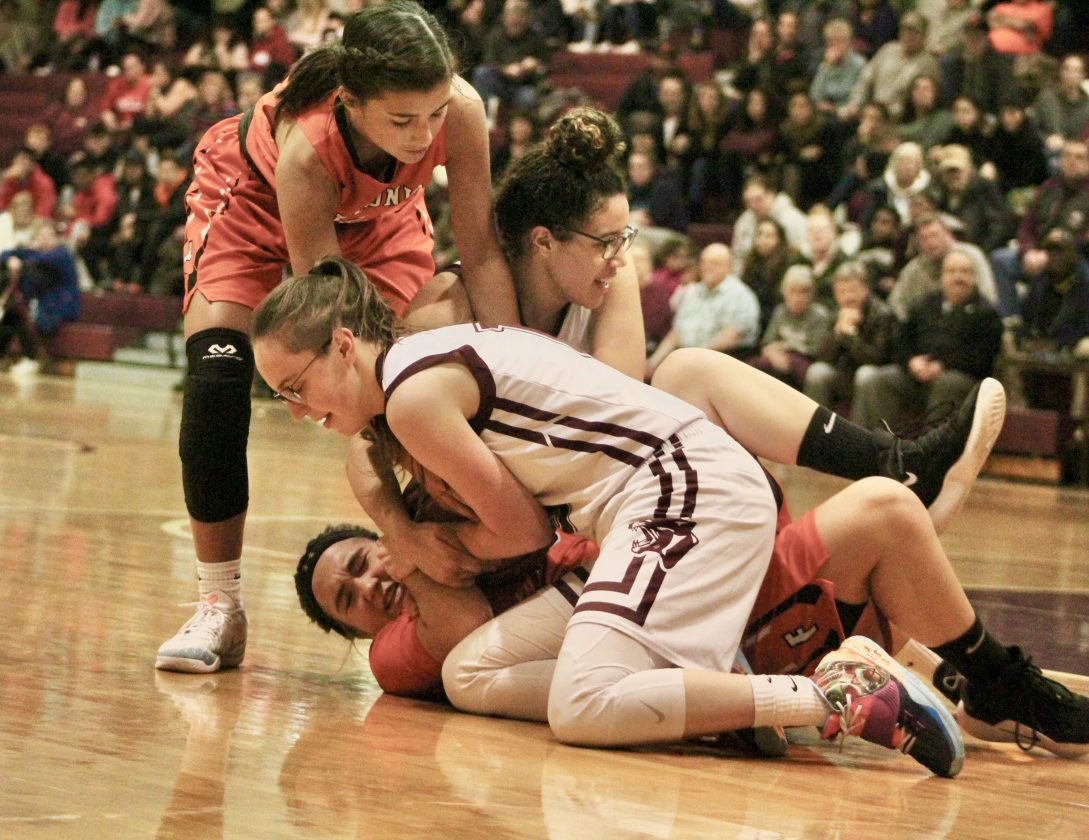 Olivia Smith and Nadara O’Dell of Dunkirk battle with Kelly Gullo and Samantha Tabone of Fredonia for the ball during Monday’s game in Dunkirk. OBSERVER Photo by Braden Carmen.

“It just shows our growth as a team. Last year, in our second game [against Fredonia] they struggled a little bit without me,” said Beehler, who played in the first Dunkirk-Fredonia game last season, a Dunkirk blowout victory, but was unavailable in the second game, a narrow Dunkirk win on the final possession. “I’m glad that I can make them all better, when we’re all together,” she added.

Dunkirk (8-1, 4-1) got ahead right off the bat, as Olivia Smith drilled a 3-pointer just seven seconds into the game. Beehler followed with a 3-pointer of her own to put Dunkirk ahead 6-0 just 39 seconds into the game. The Lady Marauders extended their lead to double digits, 14-4, less than three minutes into the game. They added five more points within the next minute to lead 19-6 with 4:23 left in the first period, which forced Fredonia (6-4, 2-2) to call a timeout in hopes of slowing the Lady Marauders.

“Their energy as one unit, they just feed off of that,” said Fredonia coach Dan Vona referring to Dunkirk. “It’s like trying to stop a steam engine with one person.”

The two teams split the next 12 points of the game evenly to close out the first quarter, as Dunkirk took a 25-12 lead into the second quarter. Dunkirk led the entire game, after Smith’s bucket on the first possession.

They were hitting their shots. Hats off to those girls. They’re good players,” said Vona. “I applaud them, I really do.” 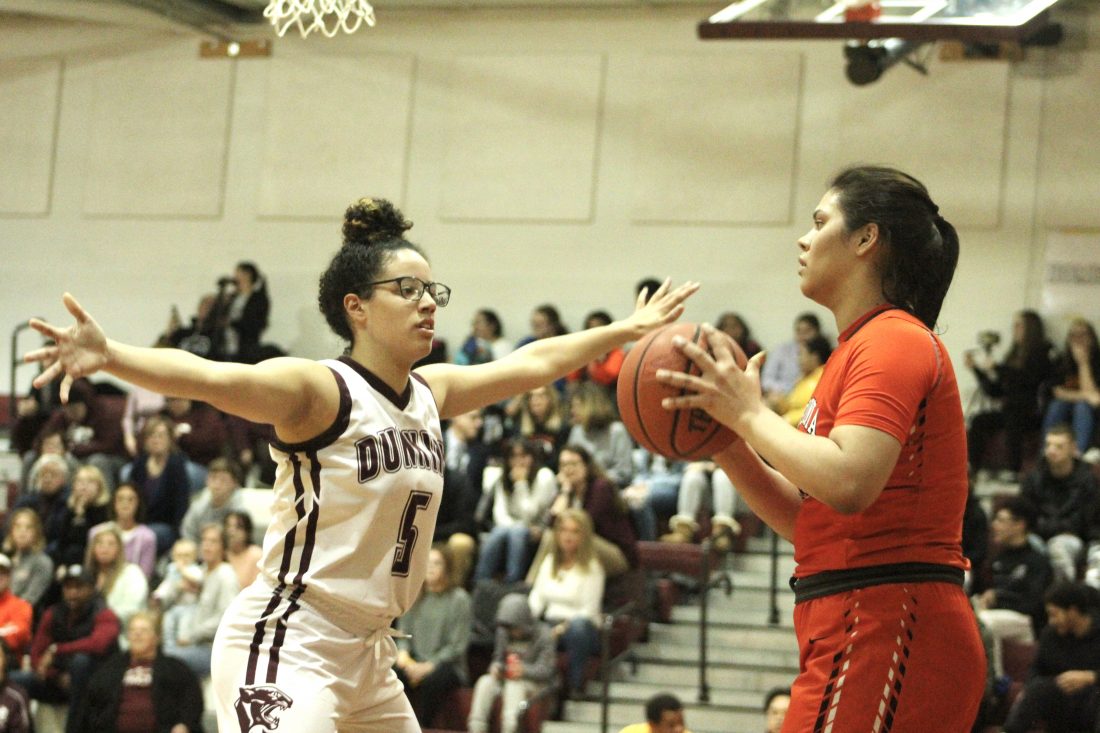 Fredonia managed to cut into Dunkirk’s lead a bit in the second quarter, as Samantha Tabone drilled a 3-pointer to bring the score within single digits, 30-21. At three different points in the second quarter, Fredonia got the deficit down to just seven points, but Dunkirk maintained the advantage the entire period. The Lady Marauders closed the first half with seven of the final nine points, including Smith’s third 3-pointer of the half. Dunkirk led 43-31 at the break, though the Lady ‘Billies outscored Dunkirk 19-18 in the period.

In the third quarter, Fredonia’s Anna Buchanan did all she could to keep up with Dunkirk, with 10 of her team-high 22 points in the quarter. Fredonia’s offense wasn’t the problem on Monday night, as the Lady ‘Billies scored more points on Monday (62) than the most points they had given up all season long prior to Monday (61).

“These girls are unbelievable, in the sense that they take a loss as a positive outcome,” said Vona of his team. “We’re only going to get better. The positives from these last two losses, I’ve never seen it before. It’s great.”

“We don’t stop. We just keep going,” said Beehler. “There’s no stopping us, because we never stop running.” 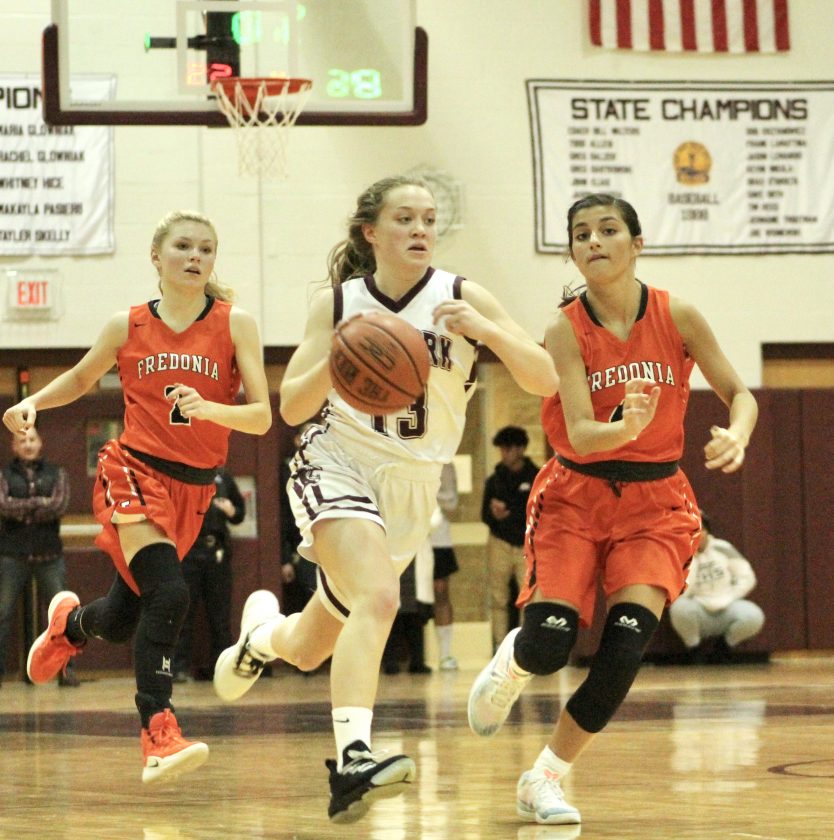 Dunkirk didn’t slow down in the fourth quarter, either. Through the first 90 seconds of the final period, the Lady Marauders scored nine of the first 11 points of the quarter. Dunkirk led 80-53 at that point, and the lead extended to 31 points on a bucket by Nance before the halfway point of the period. The Lady Marauders led by more than 25 points the rest of the way, and fell just four points shy of 100 on the night.

“We laugh because we’re still far away from where we can be,” said Ricker. “Kymi is special. Jessica is special. Nadara is special. … It’s just awesome for our seniors. They’ve taken their lumps and hopefully, it’s their turn.”

In addition to her game-high 32 points, O’Dell added nine rebounds and five steals. Nance added eight rebounds and seven steals to her 29 points, while Amari Carter had seven points and seven rebounds. Smith’s 12 points all came on 3-pointers.

In addition to Buchanan’s 22 points to lead Fredonia, seniors Kazlin Beers and Nagely Vazquez both reached double digits. Beers had 13 points and Vazquez had 12. Tabone had nine points, as well.

For Beehler, one of Dunkirk’s five senior starters, Monday’s performance ranks as one of the best in her eyes among every sport she plays at the varsity level – basketball, softball, track and volleyball included.

“This is up there. This is probably one of the top games I’ve played,” said Beehler.

Dunkirk will travel to Olean next on Saturday afternoon. Fredonia is at Southwestern on Thursday.

OBSERVER Photo by Ron Szot Dunkirk point guard Jessica Beehler (13) drives by the Fredonia defense for a layup in the first quarter of Dunkirk’s 96-62 victory over the Lady Hillbillies on Monday night at Dunkirk high school in CCAA West 1 Division girls basketball action.

Olivia Smith and Nadara O’Dell of Dunkirk battle with Kelly Gullo and Samantha Tabone of Fredonia for the ball during Monday’s game in Dunkirk. OBSERVER Photo by Braden Carmen.