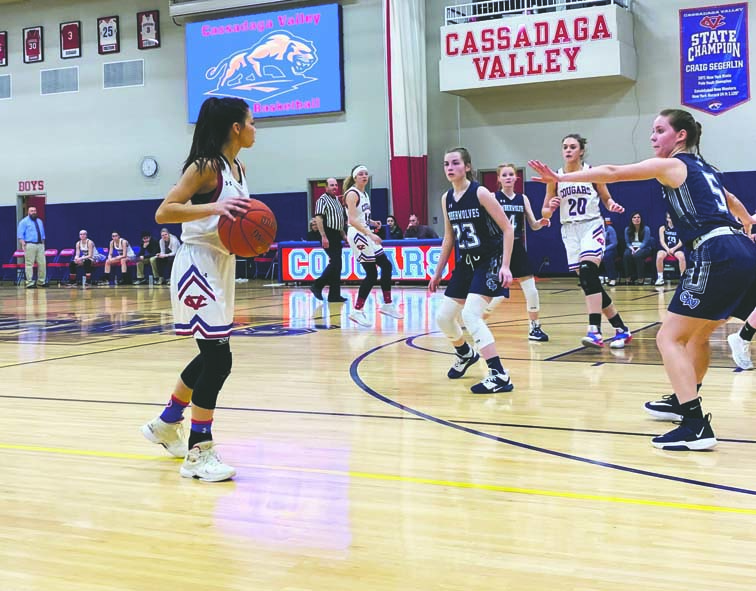 The red hot Lady Cougars came out firing on all cylinders to start the game, establishing an early lead on the visiting Lady Timberwolves. Cassadaga Valley was scoring both high and low to get up by double digits in the first quarter, 13-3. A late Catt./Little Valley shot made it 13-5 after the first.

“We emphasize that it starts with defense for us,” stated Coach Fryberger. “Our whole mentality for the game starts with defense. We have to get after it on that side of the ball, it just helps us get into the flow of the game a little bit better offensively and all around.”

The Lady Cougars really started to build their lead when Mckenzie Haskins started to heat up. Haskins hit four 3-pointers in the second half, scoring 12 of her team high 14.

“Haskins has been shooting the ball very well,” stated Coach Fryberger. “I’m very proud of her and we’ve been feeling the flow of the game versus trying to force things that aren’t there.”

Haskins had all of the Lady Cougars’ points in the fourth quarter, while Isabella Ruiz and Meghan LeBaron helped with build the 20-point margin in the third quarter. Ruiz finished with 13 points, while LeBaron had nine points along with seven rebounds. Sara Meder and Kaylee Pattyson were also dominant on the boards with seven rebounds apiece.

The Lady Timberwolves’ best frame came when the game was already out of hand, scoring 11 of their 29 points in the final quarter. Catt./Little Valley was led offensively by Alex Minnekine with 13 points.

Cassadaga Valley will look to extend its win streak on Friday when the Lady Cougars travel to Westfield for a CCAA Division 2 West matchup against the Westfield/Brocton Lady Wolverines.

“We had a big win against Frewsburg last week and that set us up with some momentum,” Coach Fryberger stated on what has the Lady Cougars on a win streak. “The girls play tough… they’re passionate and they are working for their success. We can’t take our foot off the gas pedal, we have to have intensity from the opening tip to the last buzzer.”