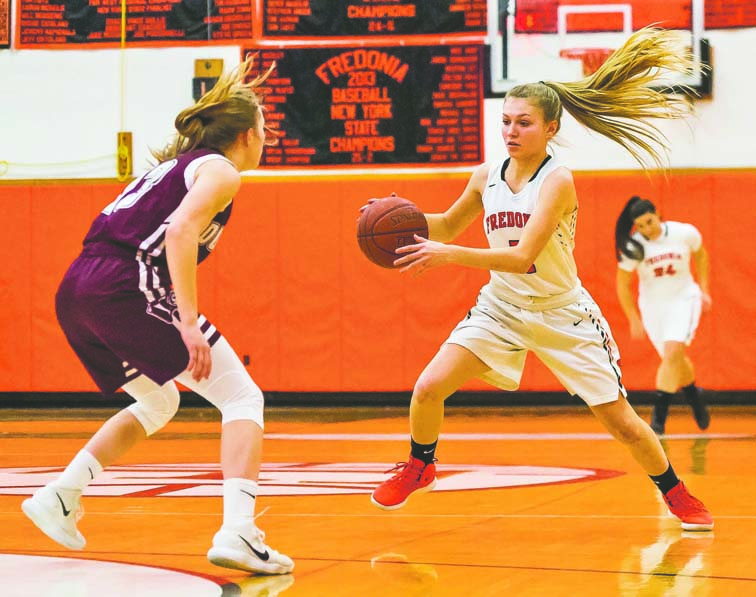 Friday night, the Fredonia Hillbillies boys basketball team took down the Dunkirk Marauders to extend their rivalry win streak and stay atop the Dunkirk-Fredonia rivalry on the basketball court. Tonight, the ladies get their turn on the rivalry stage.

The Dunkirk Lady Marauders host the Fredonia Lady ‘Billies tonight at 6 p.m. at Dunkirk High School in the first meeting of the two teams this season. The Lady Marauders hope to bring the rivalry crown back to Dunkirk, like they did in both meetings a year ago. Fredonia, however, hopes to get back to winning ways in the rivalry like it had prior to last season.

Last year, the first year under coach Ken Ricker, Dunkirk took care of business both times it faced Fredonia. The game in Dunkirk was a classic, as Fredonia had a shot in the air that could have won the game, but Dunkirk was fortunate enough to earn the one-point victory. The other matchup, in Fredonia, was not as close. The first meeting last year was a blowout 85-52 win for Dunkirk. In the second meeting last year, Dunkirk point guard Jessica Beehler was unavailable due to illness. This year, Dunkirk is fortunate enough to have Beehler among five senior starters healthy for the first meeting tonight. Beehler has had a sensational senior season so far, with three triple-doubles to her credit. Her passing ability has helped guide Dunkirk’s high-powered, up-tempo offense this season with a record of 7-1 on the season and 3-1 in the CCAA West 1 girls basketball division.

“She’s certainly a huge key to our success. Point guard is such an important position, and she’s done some incredible things this year already with three triple-doubles. You don’t see that in high school girls basketball,” said Ricker.

Dunkirk’s only defeat so far was a narrow 68-65 loss at Maple Grove, which was the only time all season the Lady Marauders have been held under 75 points. Dunkirk has surpassed 80 points in six of the seven wins this season, including three of the four wins in a row for the Lady Marauders coming into tonight. Dunkirk won league games against Southwestern 78-75 and at Allegany-Limestone 88-55 last week.

“We’re coming into our own more each day. We’re excited to see this thing out,” said Ricker, referencing his five seniors. “I think the seniors are savoring the opportunities they are getting. I hope we keep getting better, that’s what this game is about. It’s not just another game, I’m not going to lie and say that it is. But I didn’t take this job just to beat Fredonia. For us, our league is so good, I just want us to keep getting better.”

Similarly to Dunkirk, Fredonia comes into tonight with a quality record overall and in league play. The Lady ‘Billies also only lost to Maple Grove in league play so far, as Fredonia fell 55-37 at home on Thursday against Maple Grove. While Fredonia only had one league win a year ago, the Lady ‘Billies already have a pair of league wins this year — a 51-43 win over Olean and a 63-58 win at Chautauqua Lake last week. Fredonia also has a veteran point guard leading the way in senior Kazlin Beers, who has plenty of big game experience for Fredonia, spanning multiple seasons in multiple sports. Fredonia also has an improved inside game this season, led by seniors Nagely Vazquez and Anna Buchanan. Fredonia is coached by first-year varsity coach Dan Vona, who has many years of coaching under his belt at different levels other than the varsity game. Tonight will be his first chance to make a mark on the Dunkirk-Fredonia rivalry at the varsity level.

“I’m just hoping to use my experience to help them with the mental battle of it,” said Vona. “The girls all know each other, playing with or against each other in many sports growing up. … It will be a friendly battle, so to speak.”

On Dunkirk’s bench, Ricker’s experience extends past just coaching in this game. He played for both schools as a player in high school in the rivalry, splitting his high school career between Dunkirk and Fredonia.

“I’ve been on both sides of this as a player. It’s a lot more fun when it’s a rivalry,” said Ricker. “The girls all know each other and played with each other growing up, so that just adds to it now.”

Tonight will be a clash of two drastically different styles of play. While Dunkirk’s high-octane offense has scored well over 70 points in every game but one all season, Fredonia has not reached 70 points once this season. Fredonia’s defensive effort has guided the team to a 6-3 record this season, including 2-1 in league play. The Lady ‘Billies only allowed 60 points once all season, when Panama — one of the top teams in Class D in the state — scored 61 points in Panama on Dec. 5. Panama and Chautauqua Lake (58 points) were the only teams to top 50 points against Fredonia this season.

“We just can’t play into their hands,” said Vona. “We have a plan of attack against that and we just can’t succumb to that pressure. We just have to play our game and stick to our plan.”

“I’m not sure what the key to making the game our way is, but that’s going to decide the game,” said Ricker. “We just want to play our speed and take advantage of what we have. Hopefully its an 82-80 game, not a 42-40 game.”

The winner of tonight’s game will be the higher of the two teams in the division standings, as each team only has one loss in the league — as if these two schools needed any added motivation.

“We haven’t even talked about the standings right now,” said Vona. “This is going to be a battle in itself. That’s all we’re focused on.”

Tonight, Dunkirk has a third win in a row against Fredonia at stake, while a Fredonia win would mean both Fredonia basketball teams beat Dunkirk within a week’s time. Both teams have plenty to fight for, and their fans plenty to cheer for. It all will be decided tonight at Dunkirk High School.

Follow along on Twitter tonight for updates during the game @bradencarmen and @TheObserverNY and read the game story in Tuesday’s OBSERVER.