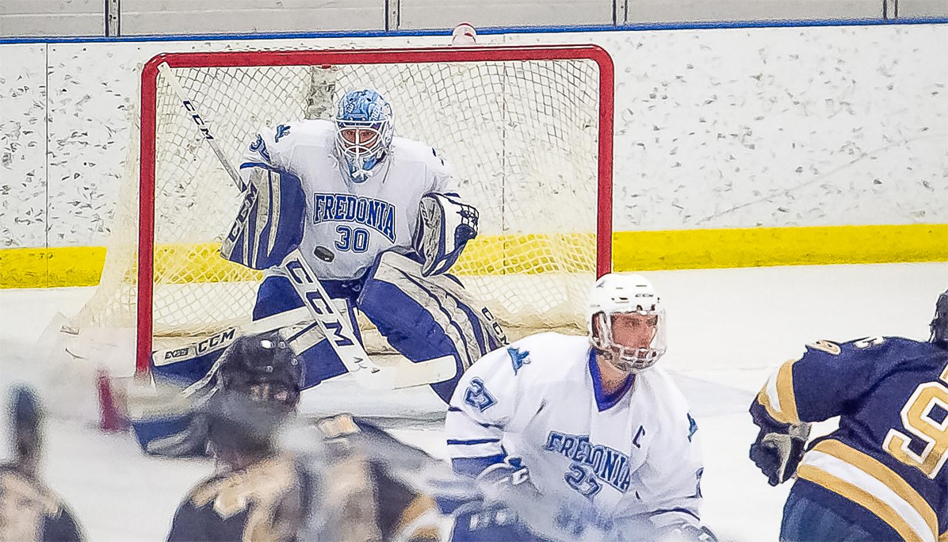 Fredonia State sophomore goalie and Lakewood native Ryan Pascarella is about to make a save during a recent SUNYAC hockey game. OBSERVER Photo by Ron Szot.

In some instances, success in athletics comes down to making the most of an opportunity when it’s presented.

Pascarella, a sophomore, thrived in only his second career start and fourth career appearance last Saturday, a 2-0 Fredonia State win over SUNY Canton.

In total, he turned away 25 shots. He lowered his goals against average to 1.26 in 142, improved his save percentage to an impressive .948, and ended up collecting his first collegiate win and his first shutout. He received the game’s No. 1 star and he was named the Fredonia State Booster Club Player of the Game.

That performance followed Friday’s 4-3 loss to the same SUNY Canton Kangaroos. Pascarella entered that contest midway through the second period and closed out the game, making six saves and not allowing a goal.

Pascarella didn’t play a minute last season as a freshman. Coming into this season, he was third on the Fredonia State depth chart. However, he managed to remain focused and locked in, patiently awaiting a chance. Due to an injury to the team’s starting goalie and a tough start to Friday’s game for the team’s backup, Pascarella was finally given that chance.

And he certainly made the most of it.

“It was just a great feeling,” Pascarella said. “Because a lot of the guys on the team have been working with me, my goalie partners, the coaching staff, trying to push me to get there and work on my game so I could make an impact. What worked this weekend was just the whole team did their jobs and took care of what they needed to do. Our team blocked I want to say it was 13 shots on Saturday and when any team does that, they’re going to give their goaltender a chance to really play well.”

“I think it’s a challenge just like anything else in life,” Meredith said when asked about how hard it is to stay focused despite not getting a lot of playing time. “You have to get yourself ready. And then perhaps your chance will come. It works that way in the business world, in athletics and, you know, pretty much every area.”

Teammates respect Pascarella’s optimistic outlook and his resolve as well.

“It was huge,” said Thomas Martyn, a defenseman and one of the team captains. “… We needed someone back there to stop pucks and it was great for him to step up. It was a huge team win. The boys really needed that. … And hopefully it will turn our season around in the direction that we want it to. I know everyone goes to battle for him because he’s probably one of the most selfless players I’ve met in my time here.”

The Blue Devils now hold an overall record of 3-8-4, but seven losses have been by just one goal. The team’s latest victory last Saturday against SUNY Canton, which received votes in the USCHO.com NCAA Division III rankings, might help Fredonia State finally break through and build momentum as the season progresses.

“This was a complete team win,” Pascarella explained. “Moving forward, that’s going to mean so much to us. Just showing us that if we take care of business collectively as a team, I mean we can pick up wins in games that are going to be very meaningful going down the stretch.”

Fredonia State was back in action Friday in a road matchup against Stevenson University.

And after a productive weekend, Pascarella could very well receive another start in net.

“He’s intense,” Meredith emphasized. “He’s a battler. He’s got (a number) of physical skills, but I think he has extra mental skills that help him, whether it’s competitiveness, or the focus, or the drive. He just likes to compete. … He plays that way when he gets in. You know, he could be down and out, but he’s still battling to make that next save. And I think that’s what good goaltenders do.”