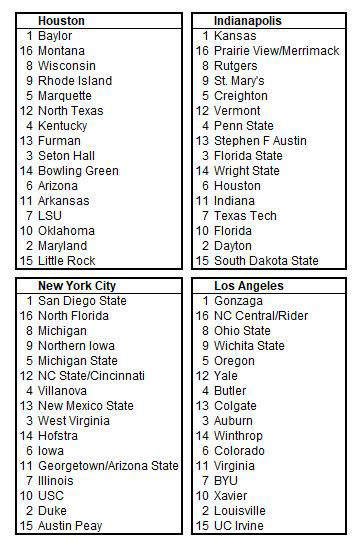 You’ve probably heard of “the bubble,” which refers to the last six-to-eight at-large teams that get in and the first six-to-eight teams that get left out. The bubble is one of the most volatile segments of the bracket, with teams moving up and down and into and out of the field of 68 each week. These teams are often very similar to one another. They all have serious flaws (else they’d be seeded higher!) but they usually have multiple arguments in their favor (else nobody would be talking about them!). Rarely can you make a 100% certain argument for or against them. With about three weeks of games remaining plus the postseason conference tournaments, they all have time to improve (or weaken) their status. The Selection Committee will make judgment calls on them, and some teams won’t be happy with the results.

This week’s bubble teams were tough to sort through! One of the first “cuts” we made was East Tennessee State. I frequently complain that the mid-major conference teams usually get shafted by the Committee, whether it’s through a lower seed than you’d expect or by selecting a power conference bubble team over them. So even if I think they have a good case, I’ll usually leave out a mid-major bubble team unless their profile is overwhelmingly good, and ETSU’s isn’t quite good enough. They have the worst strength of schedule and one of the worst losses of the bubble teams we looked at. It would be a surprise if the Committee selected them at this point.

The Big 10 Conference has 11 teams in this week’s bracket, and that would tie the record for most from a single conference. They have two bubble teams, Indiana and Minnesota. Indiana, whose worst loss was to current 11-seed Arkansas and wins over Michigan State and Florida State, gets in despite a recent slump. But we left Minnesota out, because they are too close to .500 and they have two losses worse than Indiana’s. The Big 10 is so deep that nearly every game is against a potential tournament team, and there are few if any easy outs. The Gophers may yet play their way in, but for now, they’re out.

One surprise might be that we put Georgetown in. It was pointed out to me that the Hoyas had the 11th toughest strength of schedule (best among the bubble teams we looked at), their worst loss was to UNC Greensboro (a good mid-major team), and beat 5-seed Creighton. ESPN’s ranking systems, in particular, don’t like the Hoyas compared to others on the bubble, but for now, we’ll plug them into a play-in game. ESPN’s BPI also doesn’t like Arizona State, but they have a strong win over 6-seed Arizona and a very good strength of schedule (and strength of record) so we’ll include them too.

Our last two at-large teams were North Carolina State and Cincinnati. Cincy would be seeded higher if not for some bad-looking losses to Colgate, Bowling Green, and especially Tulane. The first two are in our field of 68, though, so we forgave those losses and focused on their strong schedule and good ranking numbers as compared to the other bubble teams. NC State actually has a rather “meh” profile and is in (for now) because while they haven’t done anything spectacular, they haven’t done anything embarrassing either.

Some teams are waiting in the wings. We already mentioned Minnesota and East Tennessee State, either of whom could claim a bid. Atlantic 10 rivals Richmond and VCU could be a winning streak (or an upset of Dayton) away from an at-large bid. Stanford has the best NET ranking of all the teams we looked at, but it’s hard to see why — none of their other rankings (or wins) are all that impressive.

The bubble is the toughest part of the bracket to project. But if you look closely enough at each team’s rankings and schedule, it becomes clearer who should get those final slots.