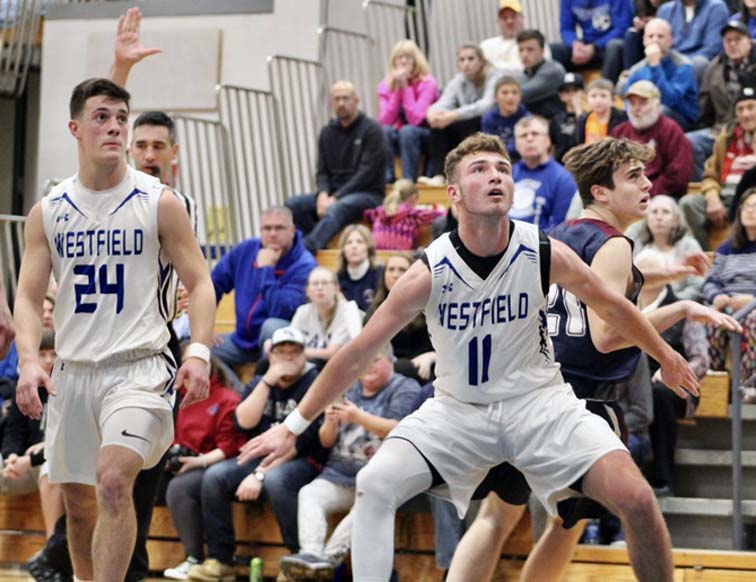 The Westfield Wolverines have spent the last two seasons as the best team in CCAA Division 2 West. This season, the team defended its first undisputed league title since 2000 last year by earning another one, with a second straight year with a home playoff game in the process.

For the second straight year, the only OBSERVER team to win a boys basketball league title was the Wolverines. This season, the all-senior starting five of Andrew Baribeau, Nate Culbreth, Ryan Jafarjian, Mike Johnson and Dylan Scriven has left its mark as one of the most accomplished senior classes in Westfield program history.

Westfield coach Bob North, the winningest boys basketball coach in both Westfield history and the OBSERVER coverage area, recognizes that even after all his years of coaching, what makes this group so special is the bond they share with each other.

“They’re very close and they’ve got each other’s backs. That makes a big difference,” said North of his team. “Sometimes you have a good group of seniors, but they may have other things on their minds than the guy next to them. These guys have each other’s backs and that makes this such a special group.”

Sure, the athleticism of the Wolverines can’t be overlooked. All five starters and the rest of the rotation are multi-sport standouts. Baribeau and Jafarjian are two of the area’s better football players, but work just as diligently to master their craft on the basketball court. Jafarjian’s toughness as a running back is evident as he drives into the lane, while Baribeau’s emphatic strength as a lineman carries over as a presence in the paint offensively, as well as a dominant rebounder and shot blocker. 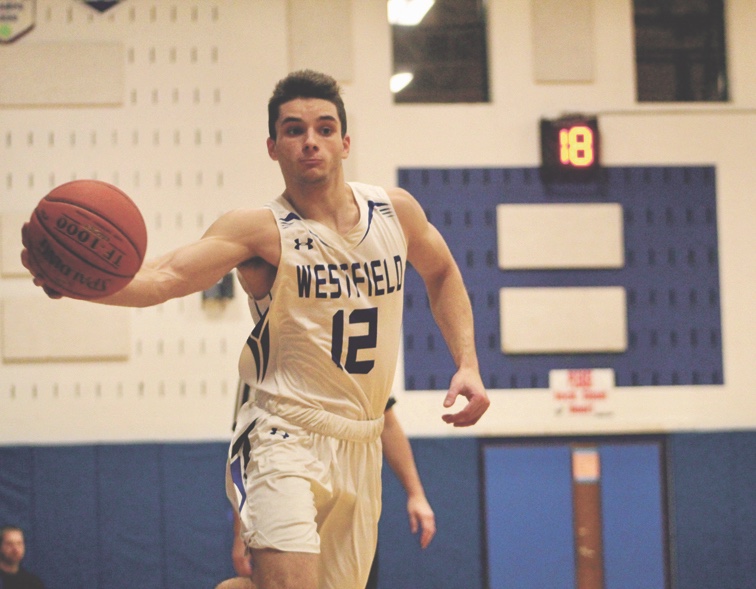 Westfield’s Mike Johnson saves a ball from going out of bounds. OBSERVER Photo by Braden Carmen.

Then there are the soccer standouts — Culbreth, Johnson, Scriven, and rotation players Cole Holland and Darien Swanson. From Scriven, a First Team All-WNY defender in soccer, to his soccer teammates, the Wolverines have a winning pedigree to pair with their athleticism. Culbreth and Johnson are some of the most vocal leaders and visibly fierce competitiors in the area, just as they were in soccer. Much like his role in soccer, Scriven goes about his business quietly, but always happens to be in the right place for offensive rebounds or on the receiving end of a pass from a teammate.

“We all play together so much. We know if we hustle and play good defense, the offense is going to take care of itself,” said Jafarjian after a win over Frewsburg on Dec. 20. “We’re all good with each other.”

That sort of team chemistry stands out to spectators and opponents every time Westfield takes the floor.

“The continuity with that group of five seniors … they have such high basketball IQ. It’s like having five coaches out there,” said Brocton coach Collin Mulcahy after a loss at Westfield earlier this season. “They play so well together. They know to make the smart passes and the right reads. They truly play as a team and you know that they’ve played together for a while.”

The chemistry Westfield has isn’t something many teams can emulate. With how long all five have been playing the sport of basketball together, it seems like this season, no moment is too big for the Wolverines. There is no better example of that than on Senior Night, when the Wolverines overcame a 13-point deficit in the final three minutes to come back to beat Sherman in the final seconds, 47-45. The Wolverines proved they are never out of any game. Not even the worst shooting night the team has had in as long as Coach North could remember could keep the Wolverines from picking up another ‘W’ at home. 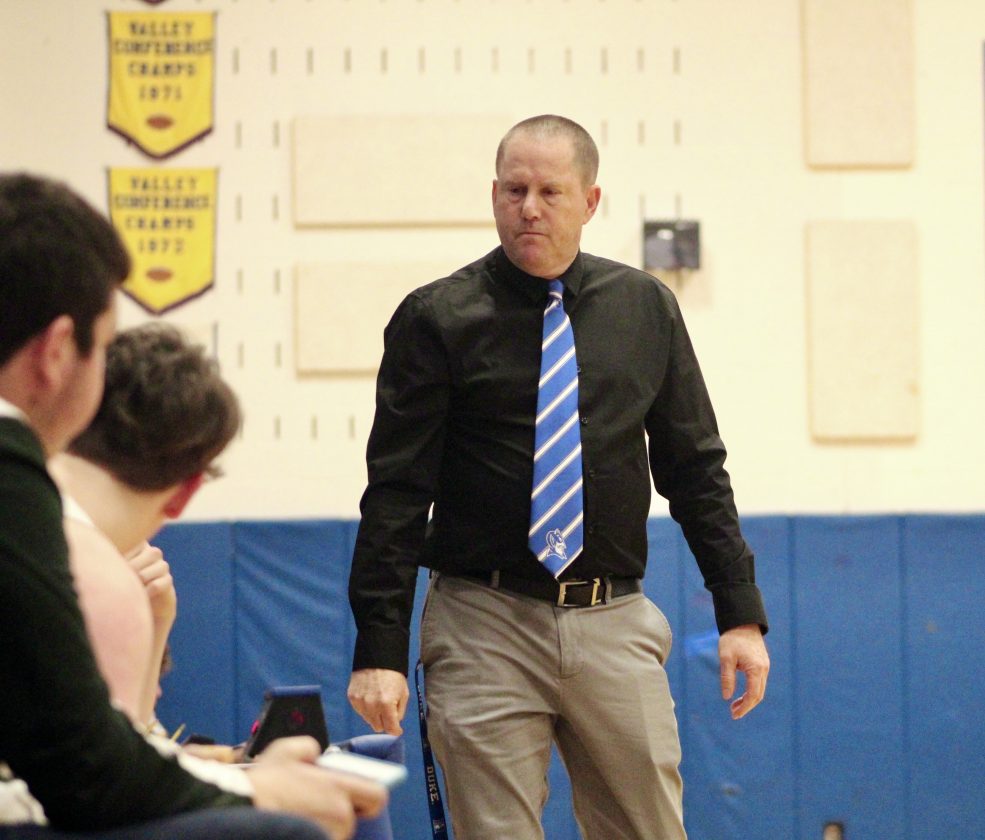 But it’s not just about on the floor. There is so much more that makes the Wolverines special.

Before the game began on Senior Night, the Wolverines brought flowers into the stands to give to their biggest fan, Coach North’s mother, Carol McEntarfer. The gesture brought tears not only to her eyes, but to her son’s as well.

As the game began, the team’s sixth senior, Zachary Roache, took the floor in place of Culbreth in the starting lineup. Roache is a fan favorite, who has the entire gym cheering for him every time he sees the floor near the end of games. The decision to start him in place of one of the seniors who typically begin the game was an easy one for North, but it was made even easier as multiple players came to North in the moments leading up to the game to volunteer their starting spot on their Senior Night.

“When they are willing to give up their starting spot to get our sixth senior on the floor, that’s pretty cool,” said North.

The unselfishness carries over onto the court, as well. Westfield regularly has multiple double-digit scorers and it doesn’t seem like the players on the floor cares who leads the way on the stat sheet. 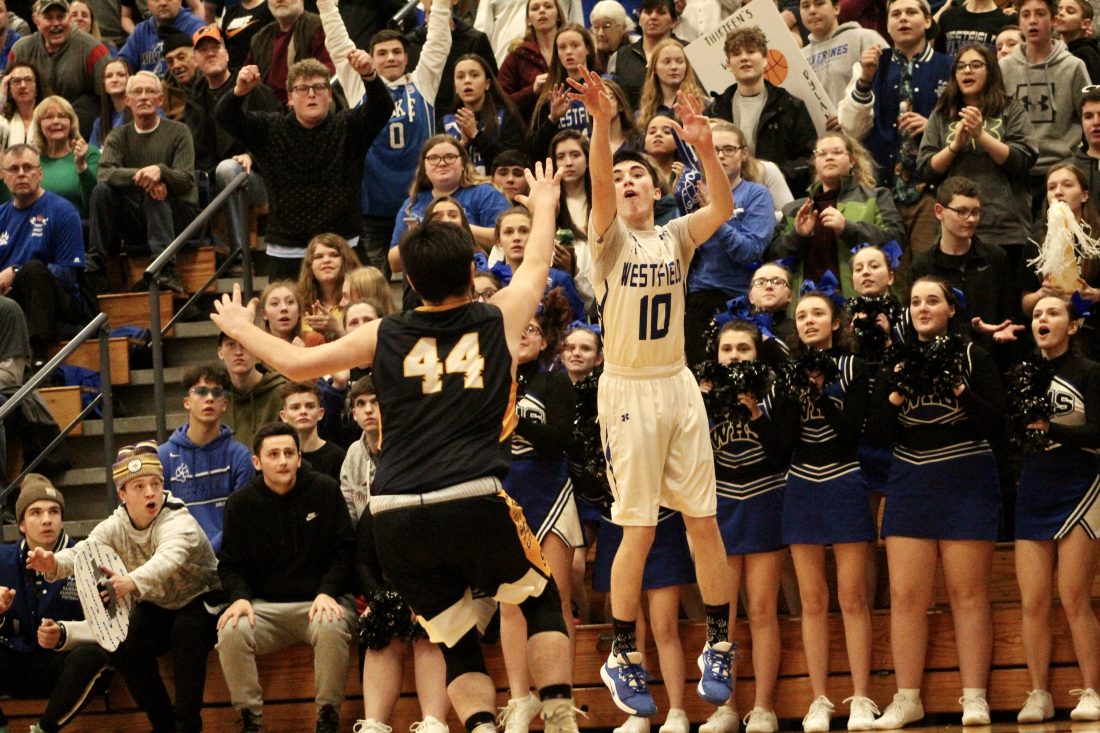 “We usually have a lot in double figures. That’s a trend here at Westfield,” said Jafarjian.

“When they’re unselfish, they’re so good. There are multiple options to score, and when one guy helps off somebody and you find an open guy who can score, it makes the game easy,” added North.

But it’s not just the players that are selfless. Even after winning his 400th game at Westfield, Coach North deflected the praise onto his players. “It’s a testament to all the good kids I’ve had come through here,” he said.

That’s just who this team is and what the Westfield program is about. They have a love for not only the game, but for each other. After multiple interviews throughout the season, multiple players spoke to how they care for each other, their families and their community.

“I just want to thank my mom for always supporting me and my dad for making me breakfast every morning,” said Johnson after beating Sherman on Senior Night.

“I love my team,” said Culbreth after beating Panama in a crucial league game on Feb. 6.

While the Wolverines have a perfect 10-0 record at home this season, it wasn’t just wins that kept coming every time the team played in front of a packed home side of the Westfield Academy gym.

“I love this team,” Culbreth said again after beating Dunkirk on Feb. 18.

Now, after back-to-back league championships, the Wolverines set their sights on the Sectional playoffs with a home game for the second year in a row. With a win, Westfield would head to Jamestown Community College for the Sectional Semifinals.

Win or lose this postseason, the Wolverines already have at least two banners to commemorate this special senior class.

“Everything we’ve worked for the entire season is to put another banner up on the wall. Everybody worked hard this entire season. Everybody that came off the bench, everybody that worked in practice, it was a team effort. It wasn’t just the seniors, it was everybody,” said Johnson after the comeback win over Sherman.

What’s easy to tell as somebody who has been along for the ride is this: Westfield’s team this season is the sort of group that will be remembered for more than just the banners hanging in the rafters.

Westfield’s Mike Johnson saves a ball from going out of bounds. OBSERVER Photo by Braden Carmen.