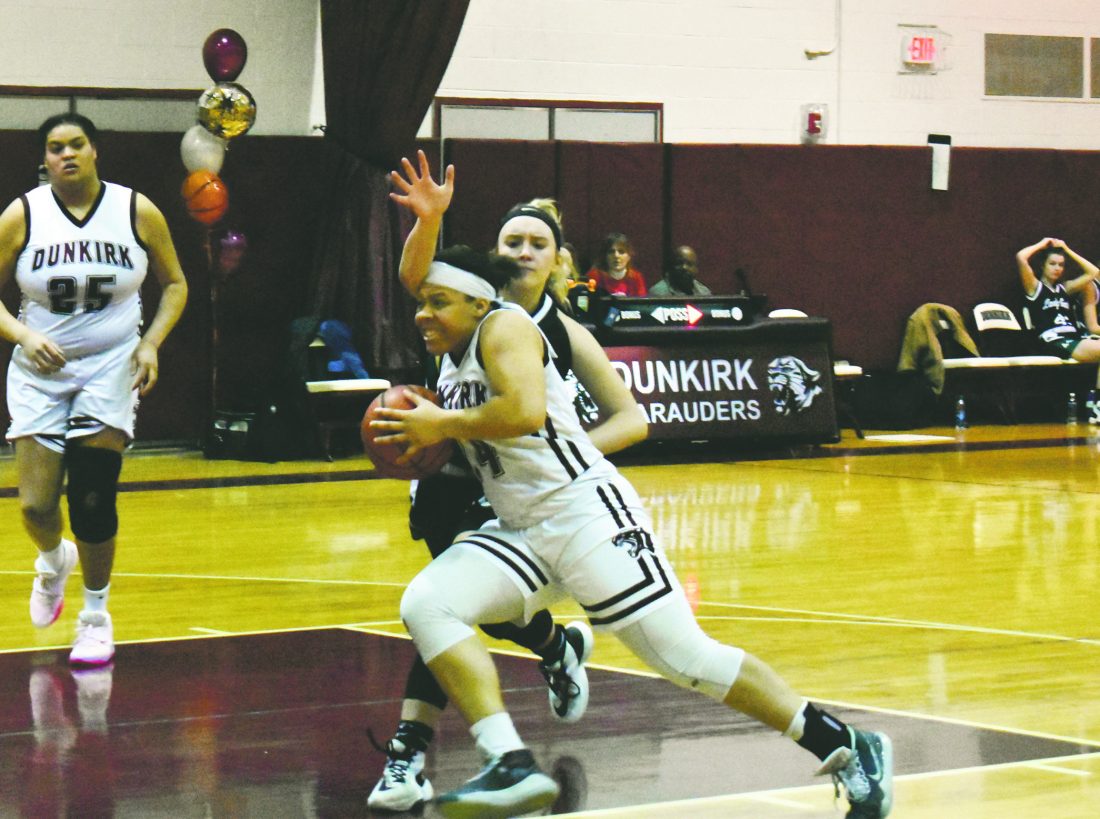 Dunkirk’s Kymi Nance fights through contact as she drives to the basket during a CCAA Division 1 West girls basketball game against Allegany-Limestone, Wednesday, at Dunkirk High School. OBSERVER Photo by Christian Storms.

DUNKIRK — In the third quarter of the Dunkirk Lady Marauders game against Allegany-Limestone, the Lady Gators only trailed by nine points, 49-40. It was impressive the Lady Gators were able to keep up with the best offense in the county for that long, but Dunkirk soon did what they do against everyone they play, they pulled away for a big 84-61 victory.

“We give up 7-2 runs and people are like ‘oh my god!”… it happens,” stated Dunkirk head coach Ken Ricker. “We also have 7-2 runs, we just happened to have more than they did.”

Dunkirk’s offense never seemed to slow down after the lead was cut to single digits and the Lady Marauders finished their Section VI CCAA Division 1 West regular season schedule 11-1 and added to their overall record at 19-1, Wednesday, at Dunkirk High School.

To no surprise the Lady Marauders offense came out hot in the first quarter and lit up the scoreboard. Dunkirk’s newest 1,000 point scorer Nadara O’Dell picked up right where she left off on Saturday against Olean as she scored 12 points in the first quarter. Early on it was bucket after bucket for O’Dell in the paint and when she wasn’t scoring down low, Dunkirk was getting buckets from downtown thanks to Kymi Nance, Tachiana Garcia and two from Olivia Smith.

After scoring 27 points in the first quarter, one would think the Lady Marauders had built a steady lead, but the Lady Gators came ready to play as they kept pace with 20 points in the quarter. The bulk of the offense came from Gianna DeRose with eight points and Taylor Davis with six in the quarter. Instead of driving in for a layup, the Lady Gators pulled up just short of the basket to avoid being blocked by Amari Carter under the rim and for a while it was working.

In the second quarter, Dunkirk’s offense continued to go with O’Dell, Nance and Smith finding baskets thanks to Jessica Beehler, who kept driving the offense with money passes. At halftime, it looked as if the Lady Marauders were going to pull away for a huge win as the score was 46-32 in their favor.

But Allegany-Limestone came ready to play out of the break and outscored Dunkirk, 8-3, and cut the deficit to single digits at 49-40. After a timeout the Lady Marauders seemed to regain their composure defensively and halted the hopes of a Lady Gators comeback.

“We give up runs, that’s part of what we do,” stated Coach Ricker. “We’re gonna have some and they’re gonna have some. In the third quarter they cut it to single digits and it was getting a little nerve racking there and then we made a nice run.”

Dunkirk outscored Allegany-Limestone, 15-8, the rest of the third quarter and received another big 3-pointer from Smith and an unlikely 3-pointer from Amari Carter who usually makes her money in the paint. Headed into the fourth quarter it was 64-48 in favor of the Lady Marauders.

Allegany-Limestone needed a big fourth quarter if they hoped to comeback, but instead the offense seemed to have run out of gas as they scored only 12 points, with a couple of buckets coming in garbage time. Dunkirk was able to give its starters a rest towards the end of the game as they went on to win 84-61.

“At halftime we said we’d really like to let the younger girls play,” Coach Ricker said about trying to get his bench into the game. “Those kids work their butt off in practice. From an eighth grader who we called up earlier in the season to Kaitlyn Davis who we added midway through the season because we need her… we want those guys to get out there and have fun too and be apart of it. We had hoped that it happened and it was nice that it did.”

The Lady Marauders were led in scoring by O’Dell with 25 points, Nance finished with 16 points and Smith had 15 thanks to five buckets from downtown.

“We have a ton to work on. Just all the little things,” Coach Ricker said about what the team needs to work on. “That’s what wins and loses games, all the little details we have to work on. We were sloppy in the first half in terms of running some of our stuff that we run all the time.”

Allegany-Limestone’s DeRose finished with 13 points and both Devin Ralston and Davis added 12 points.