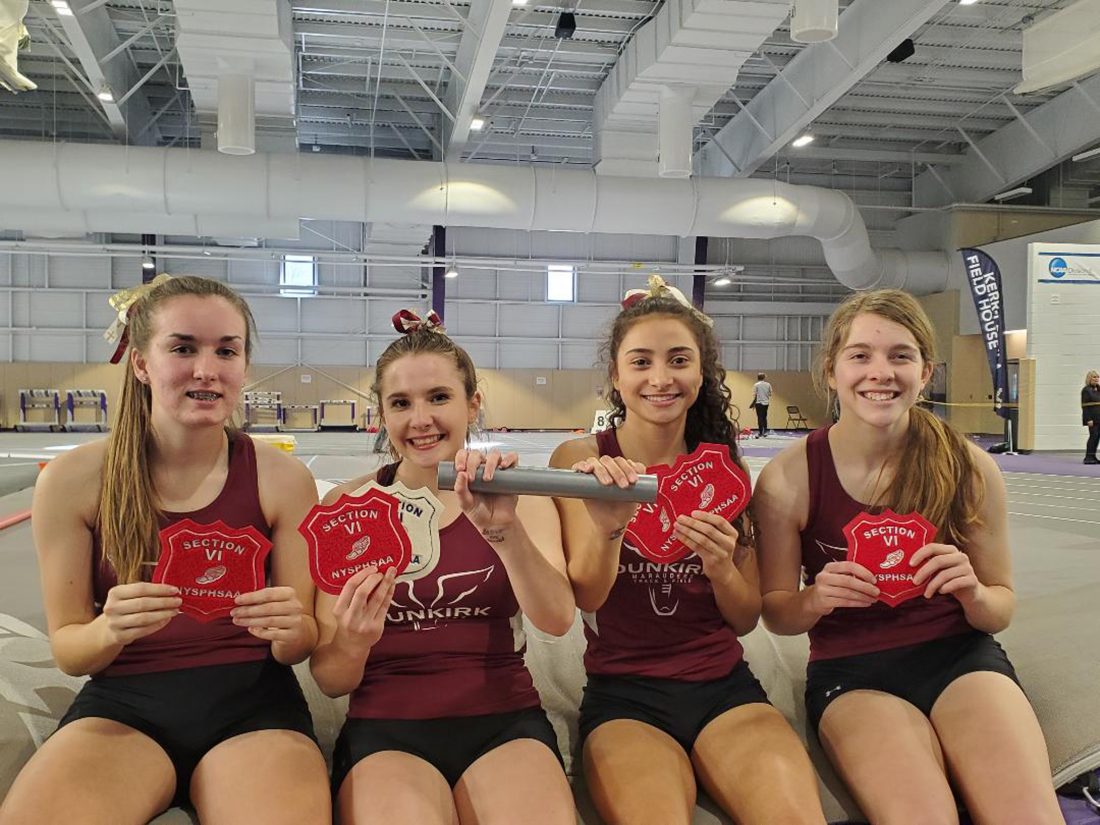 HOUGHTON – The regular indoor track season came to a close Saturday afternoon with two Lady Marauders earning a trip to the NYSPHAA State Meet March 7th. During the day, Dunkirk had 19 athletes compete after earning their way to the sectional meet.

On the boys side, Luis Balcazar, Felix Gonzalez, Alex Nytz, and Alex Procknal competed in the 4×2 and all ran personal bests. First time track athlete Nick Marsowicz earned the right to run the 300, and took 2nd in his heat to make the final race, where he took 6th overall with a new PR of 37.11. “He had a great day and a great first season showing he is up at the top with some of the best in the section,” said Dunkirk coach Adam Woelfle

The girls side featurd some good results as well. The 4×8 team of Chloe Vecchio, Mia Piede, Emma Romanick, and Yuribeth Castro had a tough race.

Romanik also took 5th in the pole vault, and ran with Katie Castiglia, Rachel Beadle, and Jessica Oquendo in the 4×2 to a 10th place finish. Gabby Hart increased her distance in the long jump to 14′ 10.5″ and Alina Beadle took 7th in the shot put.

The girls 4×4 suffered a heartbreak by only finishing 2nd after being the top seed all year long. In the trials Juliana Flick, Alexis Davis, Siera Jacques, and Kylie Procknal ran strong legs to earn a trip to the final race of the day, where Procknal, Jacques, and Flick were Joined by Jericha Petrella, and gave all they had, but just couldn’t top the Clarence team.

“It was a tough loss but the girls kept their heads high,” said Woelfle. “And they had all right to, they left it all on the track, and lost to a team, that in any other high school sport, Dunkirk/Silver Creek would never have to face based on school size, but thats the nature of indoor. And the plus side is only one girl is graduating from that team, so we will be back.”

“Our two state competitors came from the same race,” Woelfle continued. “Flick and Petrella were both in the 600 with Jericha taking 2nd and Flick third. They both had amazing seasons and put in so much work, they deserved to extend their season. Jericha will run the 600 at states as she is still chasing the national qualifying time, and Flick will represent Section VI in the inter-sectional relay.”