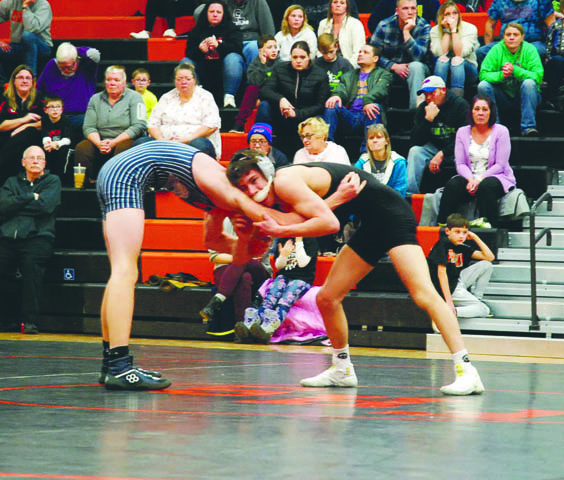 OBSERVER File Photo Fredonia’s David Ball (right) jostles for position in a match earlier this season. Ball was one of the four Fredonia wrestlers to earn an at-large bid for the State Championship in Albany on Feb. 28-29.

Entering the season, the Fredonia wrestling team had lofty expectations due to a number of key returners and exciting younger players. Now, with the season winding down, four of those wrestlers who excelled all season get their chance to be on the podium of the New York State Public High School Athletic Association Wrestling Championships, which take place Feb. 28-29 at the Times Union Center in Albany.

For David Ball, it was his first year as part of the Fredonia program, and he came in with some impressive personal accolades of his own, including being the Section VI champion, which helped him get his A1 qualifying bid from his weight class.

“He went undefeated in the state tournament last year,” said Fredonia coach Joe Santilli. “I assured him there was a good chance that wouldn’t happen again this year with our aggressive schedule. He matched up with the toughest kids we could put him up against, and that definitely prepares him for this time of year. He can be as dangerous as he wants to be.”

“He’s relied on being defensive, and we’ve really worked on trying to open up his offense,” Santilli said. “He’s starting to evolve and develop, but if he stays too defensive, he could struggle a bit.”

Ceric Kristan was also the Section VI champion in his weight class last season, helping him earn the A2 at large bid for his weight class. Not only that, but Kristan has had a taste of what the state championship tournament is like.

“He got a taste of the state tournament last year,” Santilli said. “He went 1-2 last season, and lost a close one to knock him out. He realizes he can compete at that level, and worked really hard during the season to prepare himself.

“He took one on the chin last weekend in the finals, but I’m confident he’ll rebound,” Santilli said. “He understands the bigger picture outside of one event. The 182 weight class is very deep, but he’s ready for the challenge.

Alex Christy faced a close call for whether or not he’d get the final bid, as he fell into a large pool. Despite the fact Santilli thought that Christy would earn a bid, Santilli didn’t want to be the one to break the news to Christy if he didn’t.

“He ended up getting the final spot for the class,” Santilli said. “Which is good, because I didn’t want to make the phone call to tell him he got bumped.

“He’s had a significant trajectory since his freshman year,” Santilli said. “He believes in himself and trusts his training. It really is all him. He’s willing to do the extra work and he can do it on his own. He knows 220 is a solid weight class, but he’s not satisfied just getting there, he wants to do some damage and get to the podium.

Jake Skinner, who had two first place finishes at the 34th Annual STWOA Holiday Classic and the NYSPHSAA Section VI Class B Wrestling Championships, two third place finishes in the NYSPHSAA Section VI 70th Annual Wrestling Championships and 57th Annual State Qualifier (D2) and the 27th Annual Lockport Boosters and Sunrise Optimists Invitational Wrestling Tournament, and a fourth place finish in the Gary Gross Memorial Wrestling Tournament was the section runner up from last season, and while he wrestles in a tough weight class, a lot of his toughest competition came in practice.

“Him and our other guy in 285, Yanny Acevedo, battled all year and made each other better,” Santilli said. “Jake gets to reap the benefits of that and see where he falls across the state.”

Acevedo was one of the Fredonia wrestlers who fell just shy of earning a bid for the State Championship, as Hunter Larson just missed after dropping down to the 145 weight class during the season. Larson replaced Dalton Gardner, who had a season ending injury early on, and it would be expected that if Gardner didn’t suffer that injury, he would have found his way to the State Championship as well.

Cole Golembieski and Matt Lotter, who was in his first year wrestling, each had fifth place finishes at the State Qualifier, as the Fredonia wrestling team is putting the finishing touches on what was a successful season for the team as a whole.

“It was a pretty extraordinary season,” Santilli said. “Injuries sidelined some of the guys but we still won 22 duels as a team and placed high in every tournament we entered. The season isn’t over, and all of our guys deserve this chance.

Special to the OBSERVER The management of Darwins Health Club would like to wish everyone well during this trying ...