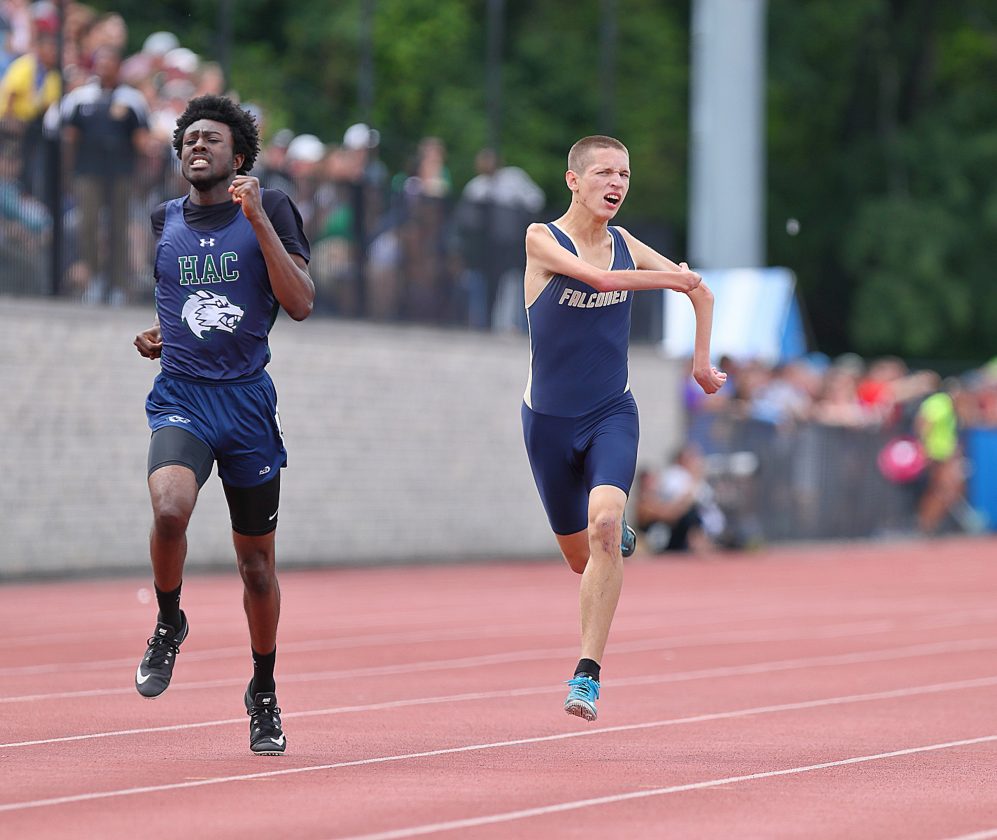 From having a top 400-meter time in the Chautauqua-Cattaraugus Athletic Association to being a member of a state-championship winning 1,600-meter relay team, Falconer/Cassadaga Valley senior Rayven Sample is no stranger to success on the track.

That success, along with immense determination to overcome any and all obstacles, may now allow Sample to represent the United States in the Paralympic Summer Games in Tokyo in late August.

Sample was born with arthrogryposis, which according to the Genetic and Rare Diseases Information Center of the National Center for Advancing Translational Sciences, refers to the development of multiple joint contractures affecting two or more areas of the body prior to birth.

A contracture occurs when a joint becomes permanently fixed in a bent or straightened position, which can impact the function and range of motion of the joint and may lead to muscle atrophy.

For Sample, some joints have a small range of motion and others have none at all. The most visually obvious of his affected body parts are his arms and wrists, which are bent and/or twisted at what appear to be seriously uncomfortable angles.

To prevent from stiffening up in athletics and everyday life, he must go through an extensive stretching routine.

However, Sample hasn’t let his condition prevent him from flourishing thanks to his supreme work ethic, a bona fide love for track and field and a positive mindset.

Woven together, the possibility of competing in Tokyo in six months is a possibility. In order to qualify, he must travel to Arizona to become officially classified around April. Then in June, Sample will head to Minnesota for the Team USA Olympic Qualifiers and may also have to make an additional trip to London for further classification.

To combat the steep costs of travel and boarding, along with entry fees for the multiple events, the Falconer Track Club has created a “GoFundMe” website to help Sample raise money to reach his goal.

And to this point, the support from people in and around the local community has simply been overwhelming.

After one day, enough money was raised to cover Sample’s trip to Arizona. And in less than a week, enough money has been raised to surpass the campaign’s initial $10,000 goal.

“I was really surprised that in one night, it was already over a quarter of the way done,” Sample stressed. “That was completely overwhelming and completely insane. It’s very uplifting. The fact that I know I have that much support from everyone around, it’s just very encouraging.”

Nick Spry, one of the coaches who has worked regularly with Sample over the years, has provided updates on the campaign’s website.

“He’s awesome and he’s a lot of fun,” Spry said when asked about Sample. “When we started this campaign, I was absolutely shocked at how fast the money went up. And a big part of that is it’s not just our team, but people from all of the other teams (we compete against) enjoy his presence and being around him and running with him. … When you run against other people, they aren’t just your enemy. They are pushing you to run faster and it really helps, it really creates a family. It’s been great to see them all come together for this.”

The website will remain open throughout the spring season to provide updates. Any additional proceeds will go toward Sample’s journey and helping his grandparents, Tom and Kathy, travel with him so they can enjoy the experience together. Anyone interested in donating can do so by visiting gofundme.com and searching, “Rayven Sample.”

“I’m pumped (for him),” Spry emphasized. “We are looking at where he could be if we have him classified right in what we think he’s going to be and he’s honestly right there. Not just in the top mix, but potentially all-time. So it’s very exciting.”

With a groundswell of support and an entire community backing him, Sample can’t wait to get the process started.

“With really any sport, it’s not so much the setbacks you’ve had in the past or the negatives,” Sample explained. “It’s all about what can you do today to make yourself better. To make yourself be on the (same) stage with the people who have done insane, amazing things, the absolute giants of your sport. … It’s all about how can you put everything that you have into the sport that you’re very passionate about. To get the absolute most out of it that you’re able to. … I’m extremely looking forward to it.”