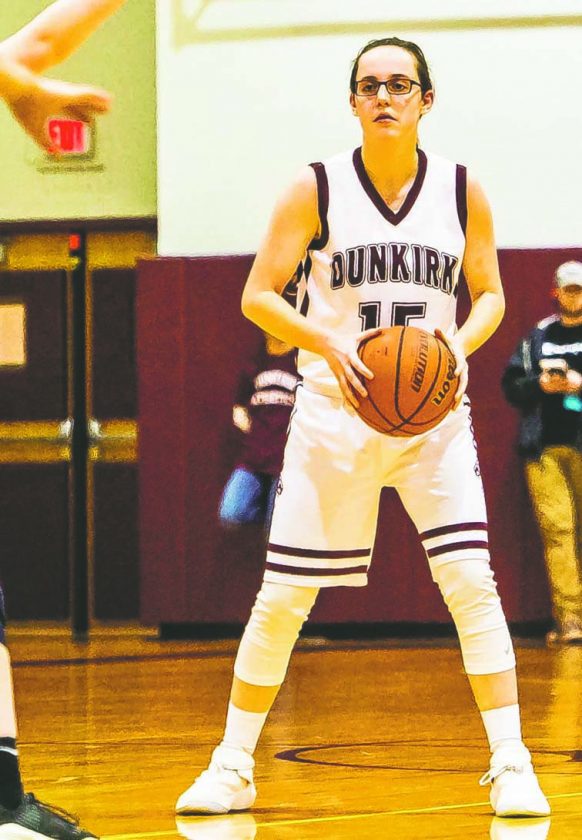 After a regular season for the ages, Dunkirk’s best team since 1991 is poised to make some more history.

Two years ago a very young sophomore starting five at Dunkirk of Kymi Nance, Jessica Beehler, Olivia Smith, Nadara O’Dell and Amari Carter found their way to the Sectional Final against Fredonia in a dream season for such a young core. After an underwhelming season a year ago, the same group has come back and had a season a team could only wish to have.

Now in their second season with head coach Ken Ricker it was at that Sectional Final in 2018 when Ricker first got to see them with his own eyes and played a big role in his decision to take the job. Along with that, Ricker’s assistant coach Bill Canfield, had seen the girls play while officiating and knew that they had plenty of untapped potential.

“I was just looking for a varsity head coach job, but you’re looking for the right fit… seeing that final they lost to Fredonia and all the kids were sophomores,” Ricker said played into his decision to join Dunkirk’s program. “I knew Khee Nance [Kymi’s older sister] and how great an athlete she was. My assistant, Bill Canfield, he had officiated them a few times and he said they just needed to be coached and we can take them to the next level.”

Last year the starting five of Nance, Beehler, Smith, O’Dell and Carter entered their junior season and third year starting together, but now under the direction of one of the best coaches in the whole section, Ken Ricker. In that first season with Ricker the group struggled to find success within the league, only getting victories over rival Fredonia. Thanks to injuries and illness the Lady Marauders found themselves playing league champion Olean early in the sectional playoffs and were sent home early. 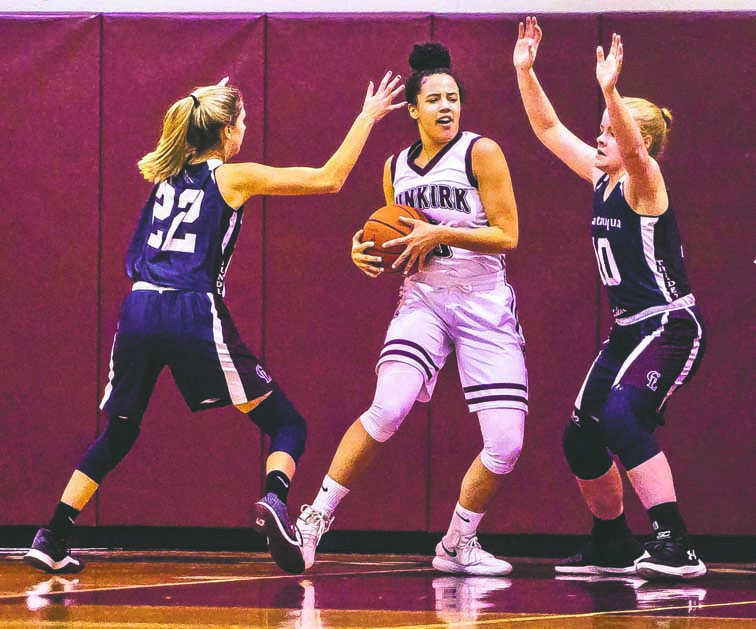 The early playoff exit certainly left a bad taste in the team’s mouth and in that off-season the girls were set on not letting it happen again this season.

“It feels good, because everyone put us out to be the underdogs,” Amari Carter said about this season’s success after last year’s disappointment. “To show them that we actually did something it feels good.”

While teams do get better during the season, it is no secret that the real strides are made during the offseason and considering that the quintet participates in multiple sports like softball, soccer and volleyball it meant that they would have to dedicate time during their summer vacation.

“Softball is so big to them, so there were no open gyms thanks to softball,” stated Ricker. “Same thing in the fall. They all played volleyball or soccer, so I talked to them about doing these summer workouts.”

Obviously asking for a group of high school kids to dedicate their summer to training is a big ask so the expectations were initially low, but the girls exceeded the expectations. 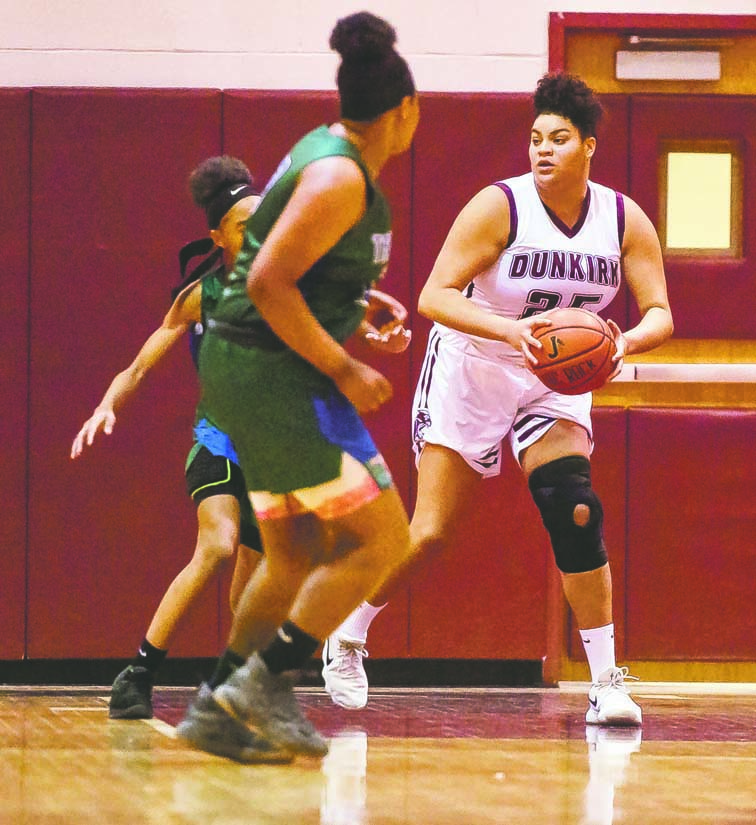 “I had to leave Lakewood at 4:45 a.m. to get to Dunkirk at 6 a.m., we were driving up and I thought that there could be nobody or just one. But everyday, there were at least four or five there and Kymi and Jessica didn’t miss one,” stated Ricker.

Going 19-1, capturing the undisputed CCAA Division 1 West league title and having multiple players achieve notable individual accolades are the results the Lady Marauders got this season, so clearly the work in the off-season has already paid off.

“Waking up in the summer at 5 o’clock in the morning to go to basketball is not the summer you wish for, but obviously this is the season you wish for so you have to put the work in to get what you want,” stated Dunkirk’s Jessica Beehler.

Hard work certainly will get you places, but in order to get to the top you need natural talent and gifts that others just don’t have. The natural talent, team chemistry and desire to succeed is what will separate the Lady Marauders in this playoff run.

“Winning league was one step further and we’re not done yet,” stated Kymi Nance. 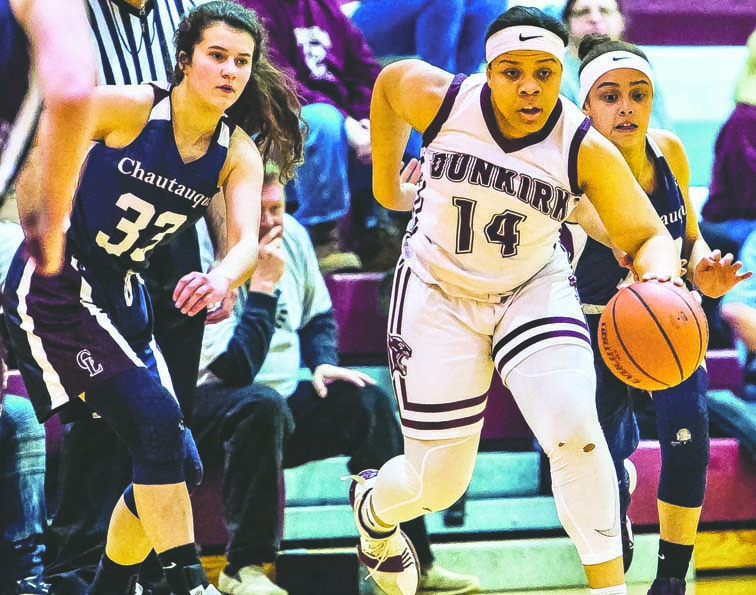 Before coach Ricker, the fivesome of Nance, Beehler, Smith, O’Dell and Carter had already put two varsity starting seasons under their belts along with a deep playoff run. Having played with each other for four seasons as starters the girls have developed a strong bond beyond their chemistry on the court.

Being friends away from the basketball court certainly makes it easier for the group to do the things that are less fun like practicing and they all push one another to get better.

“Personally I think it’s been really fun together,” Nance said about their years playing together. “We’re always goofing around in practice and we’re still competing together really well, it’s really cool.” 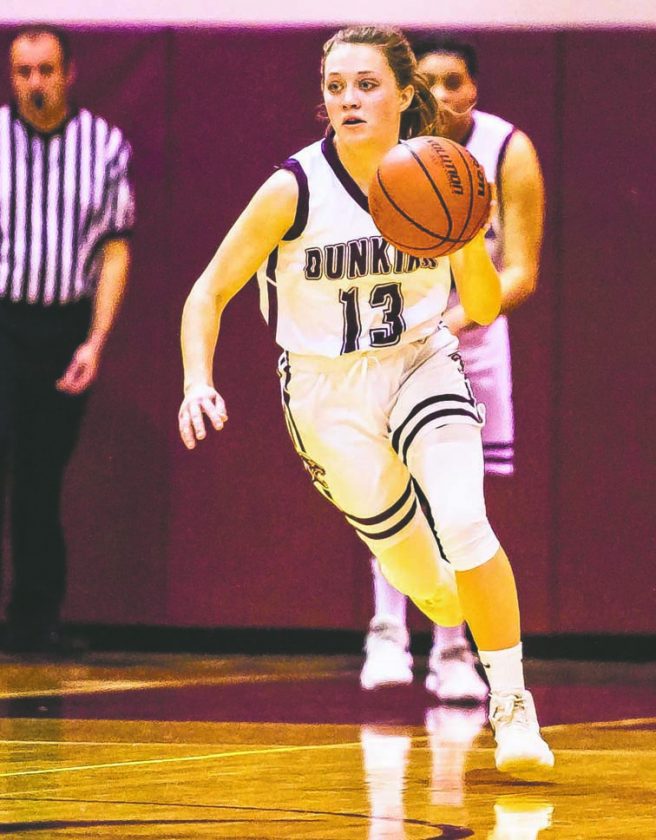 In terms of talent this group is quite possibly the most well rounded group in program history and each of the starting five fits into a very important role with the team. The team features two 1,000 point scorers in Kymi Nance and Nadara O’Dell, Olivia Smith is one of the best 3-point shooters in the county, Amari Carter is a vertical mismatch that causes problems around the basket and Jessica Beehler is quite possibly the most important piece as she is the conductor of one of the best offenses in the section and has been a triple-double machine.

The Lady Marauders offense this season has been nothing short of explosive, in full games played they only scored less than 70 points once and that came in the only loss of the season to Maple Grove, 68-65. Offensively, the team is spearheaded by 1,000 point scorers Nance and O’Dell.

Nance is a complete player who can score from all over, with a non-stop motor and the will to win.

“Kymi is the most complete player. I think she can be the best player all around by far,” stated Ricker. “She’s someone who can really score, she’s really complete. She has that thing inside of her that not many have.”

In the Lady Marauders new approach to the offense, where the team tries to score as quickly as possible knowing that few squads will be able to keep up with them, Nadara O’Dell has shined. Nadara is currently the fourth leading scorer in all of Section VI with 24.6 points per game. O’Dell and Beehler connect with each other dozens of times on long transition passes a game and in most cases O’Dell does not even have to dribble it’s just catch and shoot in the paint.

“Some of the catches she makes in transition are just amazing,” Ricker said about O’Dell. “Her and Jessica go hand in hand. She scores 25 points a game off of her hustle… an incredible kid.”

O’Dell’s hustle is never in question when watching her play. According to coach Ricker, when O’Dell first started playing for him in summer league she would want to come out of the game because she was tired. But now as a spectator you see her hustle up and down the floor and get tired just from seeing her outwork her opponents.

“Her heart and hustle, you couldn’t ask more of a kid than we do of her,” Ricker said about his team’s leading scorer.

The third scoring piece to the Dunkirk’s dynamic offense is its lights out shooter Olivia Smith. Smith who is averaging 15.5 ppg this season and it’s almost exclusively from beyond the arc.

“Just about a week ago, the last four game stretch is the best of any shooter I’ve ever seen,” Ricker said of Smith’s finish to the season where she shot about 70% from downtown. “She’s shooting them all in transition off of sprint. If she does that for another four games we’ll still be playing.”

Of all the players to face the most adversity it is Amari Carter who had knee surgery last summer, but instead of not playing her senior year, Carter rehabbed to be able to finish of her high school career the right way with her teammates.

“She’s been through a lot with her knee surgeries. She’s shown she can handle more… we need her to score 8-10 for us inside and do all the dirty work,” Ricker said of Carter’s importance. “There has never been a kid I have been more appreciative of, never asked for a practice off. They’re doing it for each other.”

When Jessica Beehler was out of the lineup last year with illness, nobody was able to step up and orchestrate the offense. While healthy and in the lineup, Beehler is quarterbacking the offense like she might get recruited to be a quarterback instead of point guard, but one thing is for sure she has what it takes to play at the next level.

“The way we play the point guard is so critical,” Ricker said about the Dunkirk offense. “You don’t see girls getting triple-doubles like that. You are going to see her in a couple of years and be like ‘wow’ her skill has caught up with her athleticism in college. Jessica is by far the most improved.”

Between their final regular season win and their upcoming playoff game against Olean tonight, the Lady Marauders have been working hard in practice and will continue to do so until they achieve their playoff goals.

“Considering we have a little bit of a break until our next game, practice is going to be a lot harder and we’re going to push ourselves,” Nance stated after their final regular season game. “I’m sure that anyone in the league doesn’t practice nearly as hard as we do.”

Now seniors and in their final season the girls will have to show they have what it takes to make a deep playoff run and try to win the section.

“We’re more mature now. We know how to get through the tough games together,” stated Nadara O’Dell.

While all of the fans would like to see Dunkirk make a deep run, regardless of what happens there is no doubt this is one of the best teams in program history and the bond the team has created is great to see.

“The coach who coached the 1991 team told my mom that we were the best team he’s seen in Dunkirk and it just means a lot that we’re making history,” Beehler said.