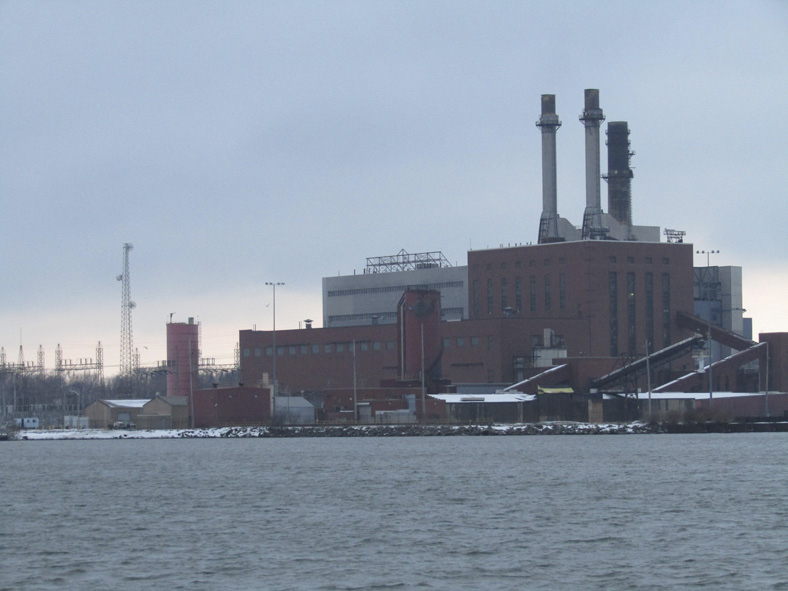 OBSERVER Photo by Gene Pauszek No smoke and no warm water discharge, but plenty of memories from the NRG power station in Dunkirk.

Things sure have changed in our area over the years. During the recent cold snap, many of us headed to the City of Dunkirk pier, to see what condition the harbor was in. There was limited ice cover, but it still strikes me every time I go there and see no smoke from the stacks and no steam from the warm water discharge.

Forgive me if I like to re-visit the past, but I can still remember the days when coho salmon used to invade the Dunkirk Harbor during this time of year. Anglers would line the sides of the pier and cast spoons like cleos, K.O. Wobblers, swedish pimples and Johnson Sprites, occasionally connecting with the silver torpedoes. As the popularity of the salmonid grew, so did the interest. Fishermen formed a group called the Lake Erie Salmon & Trout Association, commonly called LESTA. The group called for the continuation of salmon stocking in Lake Erie, but science proved that salmon like coho and chinook were better suited for Lake Ontario. Lake Erie, however, continued to receive ample stockings of Rainbow/steelhead, brown trout and lake trout. I don’t argue with the decision as the verdict proved to provide more “bang for the buck” I just miss that magic time.

Anglers would launch smaller sized boats equipped with outboard motors in the 4 to 20 horse power range and compete to tie up in the iron cross bars of the platform that exited the NRG power plant. The turbulent water exiting the plant was noticeably warmer and it would attract bait fish, which in turn would attract the predators like salmon, trout, bass and walleye. Boats would also anchor along the ridges of the moving water, offering the anglers a chance to cast a weighted bait presentation into the current. On a good day you could get a five fish limit in an hour.

Anchoring was not always an option. Sometimes anglers had to resort to trolling. A medium action spinning rod equipped with an open face spinning reel with 10 pound test line, towing a spoon or a rebel or rapala stick bait was all you needed. A local fishing legend Red Wilcox told me that if you hooked a coho, you could stop fighting the fish. “Just give it a tug, and the coho will swim right to you.” He was right. But once it saw the boat/net it would take off and you had to hurry up and reel in your slack line before it would escape. That era introduced home made smoked fish to our area. Anglers were always offering samples of their culinary skills for tasting. Walt’s Sporting Goods had two outlets and The Pro Angler came into existence for awhile. LESTA offered a get together called the Icebreaker at the Dunkirk Armory that featured a fish chowder that sold out in no time. Down riggers, dipsey divers, Planner boards/masts/releases and Lowrance became part of the fisherman’s vocabulary. It was a special time.

Now we are entering a new era. Walleye are Numero Uno and we are part of it. If you haven’t already, make plans to be part of something very special, and make your family part of it also.

Calendar: The Northern Chautauqua Conservation Club will host an in-club rabbit hunting contest on Saturday Feb. 22. Members can sign up at the club prior to the event. After the weigh-in which will be on the same day, there will be awards and food. Check it out. The Con Club will also host their annual chicken barbecue on Sunday Feb. 23. Proceeds from this event help finance the annual Take-A-Kid-Fishing Day event which is held on the first Saturday in June, which is June 6 this year.

On Monday evenings the “Con Club”is looking for people interested in learning “how to tie their own fishing flies.” Several advanced fly-tiers will be on hand to give individual attention to persons who would like to learn this hobby. All materials and equipment are provided free. The learning area is secure and a controlled environment from 6 until 8 p.m. You get to keep what you make. Refreshments are usually provided and always free. No experience necessary, no sign up required. Just show up and have fun. This would be a great opportunity for scout leaders to bring their young charges in for a great learning experience. Call 366-1772 days if you need more information or a contact number.