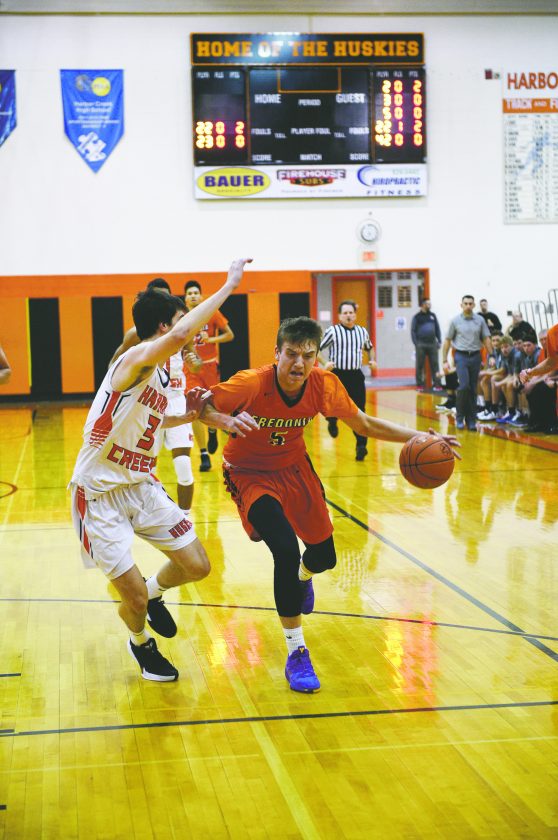 Fredonia’s Tyler Putney (5) looks to drive against a defender during a game against Harborcreek (Pa.)

The Fredonia Hillbillies went back to Buffalo State College for the Section VI, Class B2 Semifinals in back-to-back seasons, led by a trio of scorers who helped pace the Fredonia offense all season long. Those three players — Nick Whitfield, Tyler Putney and Kaleb Rybij — were all recognized by the CCAA West 1 Division All-Stars, released earlier this week.

“It definitely starts with an off-season commitment. Those guys put in a lot of time, and that was very evident this year,” said Fredonia coach Nick Bertrando.

The Allegany-Limestone Gators won the league with a record of 9-1, then proceeded to win the Section VI, Class B2 Championship. Their efforts were well-represented on the CCAA West 1 Division All-Stars, as Allegany-Limestone senior Casey Curran was selected as the league’s Most Valuable Player. Fellow Allegany-Limestone senior Gus Napolean was named a First Team All-Star, while seniors Ben Giardini and Michael Wolfgang were selected as Second Team All-Stars and Tyler Curran was an Honorable Mention selection. Gators coach Glenn Anderson was named CCAA West 1 Division Coach of the Year. 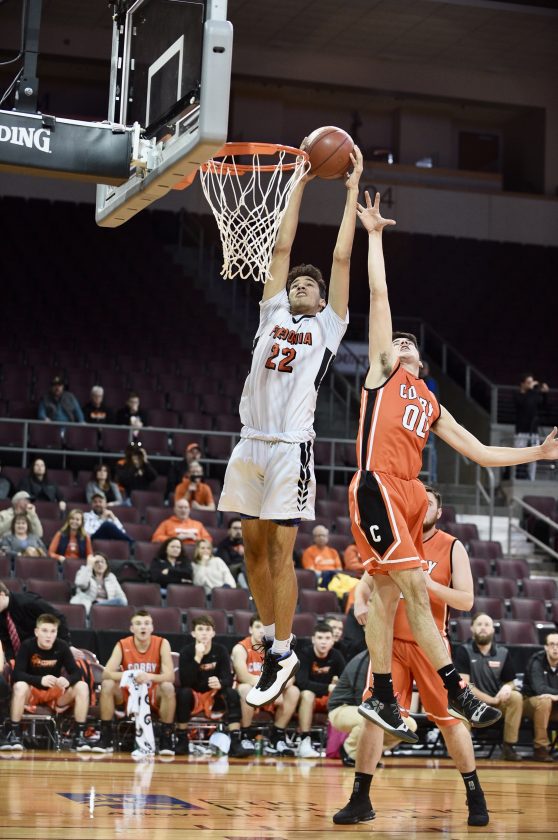 , Fredonia's Nick Whitfield (22) dunks during a game at the Erie Insurance Arena against Corry (Pa.) in Erie, Pa.

The Olean Huskies handed Allegany-Limestone its only loss in league play, then eliminated the Gators in the Class B crossover game at Buffalo State College. In what was expected to be a down year for the Huskies, two players earned First Team All-Star selections: Covi James and Jason Brooks. Huskies seniors Jah’Karee McClain and Daniel Klein, along with sophomore Zion James, earned Honorable Mention from Olean.

“I’ve said for years that we have one of the stongest divisions in NY State. You look at what Olean has done from our league, then you add in a team like Allegany-Limestone who has won two Sectional Titles now,” said Bertrando. “It’s a testament to the strength of our league.”

OBSERVER Photo by Gene Pauszek At least the deer population had an easy winter this year.

Fredonia’s Tyler Putney (5) looks to drive against a defender during a game against Harborcreek (Pa.)

, Fredonia’s Nick Whitfield (22) dunks during a game at the Erie Insurance Arena against Corry (Pa.) in Erie, Pa.