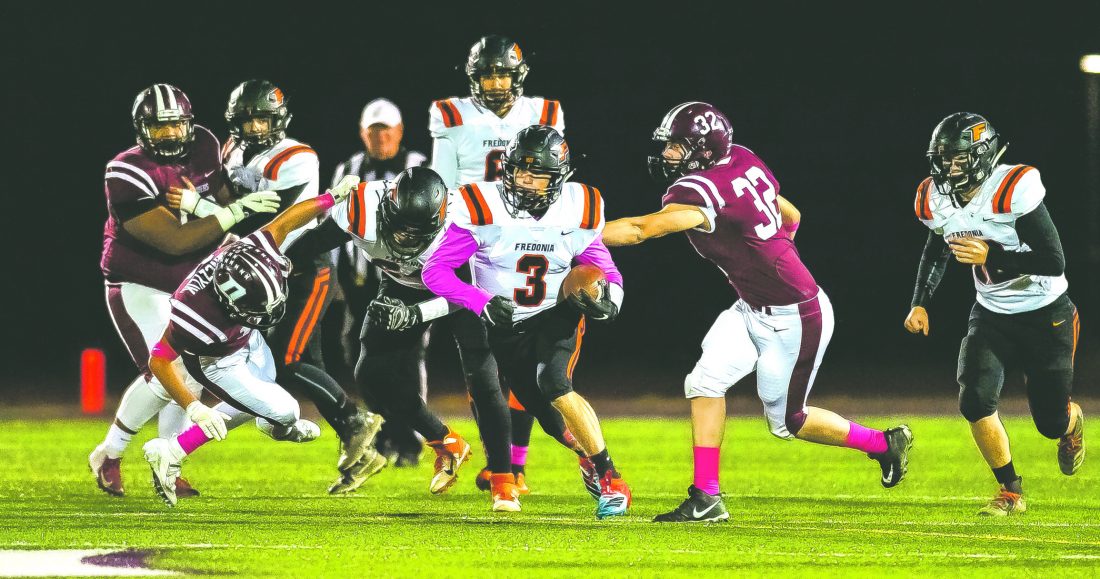 Fredonia running back Dalton Gardner (3) carries against Dunkirk last season. The Fredonia Hillbillies will host the Dunkirk Marauders in Week 4 in 2020. OBSERVER Photo by Ron Szot.

Since I began working at The OBSERVER in the fall of 2017, every high school football season has been capped off by a Dunkirk/Fredonia rivalry game. While the circumstances surrounding the game changed every year, the thing that remained the same was when it was held — the final week of the season.

That won’t be the case this coming year.

If the fall high school sports season is played as scheduled, Dunkirk and Fredonia will meet in Week 4 of the 2020 high school football season, in a non-league game for both teams. Every other game Dunkirk plays in the regular season is a league game, while Fredonia’s only other non-league game is against Portville, who was in Fredonia’s league a year ago, beat Fredonia last year, and finished ahead of the Hillbillies in the standings. Both teams have three consecutive league games after the rivalry showdown and both come into the game after hosting a league foe the week prior.

Even though the rivalry will always carry a special level of intrigue to any matchup, the next Dunkirk/Fredonia game will be far different from the epic showdown with everything imaginable at stake from two years ago.

The danger of having the Dunkirk/Fredonia game in the middle of the season is just that — danger. With three league games still remaining afterward, coupled with teams likely banged up after three games before that point, both teams will be concerned with the risk of injury. As we saw last season, both teams battled injuries all year long and it may have been the deciding factor in both teams missing out on the postseason.

Don’t get me wrong, the Dunkirk/Fredonia game is still extremely important. In fact, what the players will likely remember most 20 years down the line from their high school careers will be the Dunkirk/Fredonia games, rather than another regular season league game. In the moment, however, the scheduling for next season will definitely give both sides more to think about than just what the rivalry means in the neighboring towns.

That is, assuming the coronavirus pandemic doesn’t throw a wrench into yet another season, too.