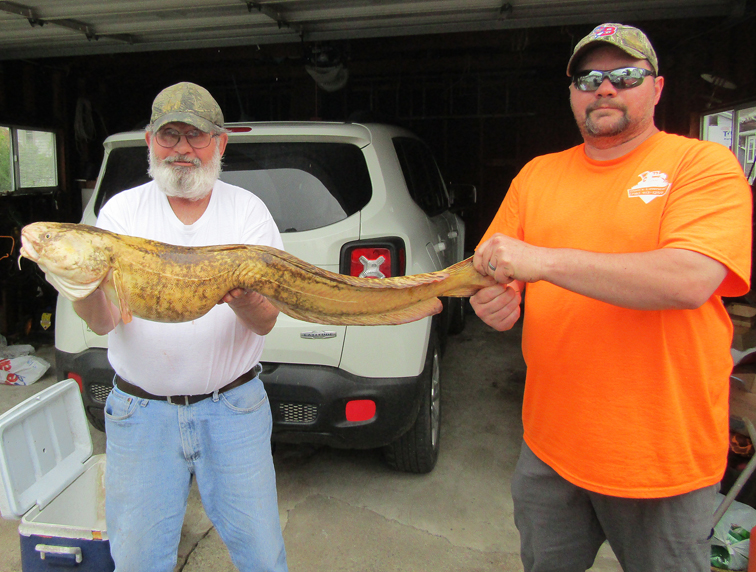 Roy Sobilo of Dunkirk spends a lot of time fishing with his friend and mentor, Captain Pienta. In case you don’t know Mr. Pienta, he is a former commercial fisherman who used to operate the tug, “Margaret Ann.” He now spends his days fishing out of a nice black and silver aluminum V hull out of Dunkirk with more knowledge and experience about perch fishing than most anyone I know. I figure he is like the Pope of perch fishing locally. Anyway, Sobilo was fishing with the captain on Friday morning when he felt a hit on his salted minnow.

His Ugly Stick fishing rod was bent over double and Roy was concerned that the 6-pound test line would be severely tested. After a 10-minute battle, the fish came to the net. It looked like it was part eel and part bull head. Pienta explained it was a burbot, but it was the biggest burbot he had ever seen in all his years of fishing. When the crew came in, they measured the fish, which taped out at 48¢ inches long. They could not, however, get an exact weight, because many places with accurate scales are closed. A hand-held scale announced it weighed 15.25 pounds, just shy of the state record, but longer in length than the title holder. It was still exciting, and made for a good meal.

On Page 3 of the May 29 New York Outdoor News, there is a story of a man named Morgan Fonzi who did break the NYS record for white bass while fishing with his father on May 6 on the Lower Niagara river. The fish weighed 3.50 pounds and he also caught another one weighing 3.46 pounds. His father, Joe, reportedly caught one weighing 3 pounds, 10 ounces the day before, but did not officially weigh it and have it checked by the DEC. You can find more information on NYS record fish by going to dec.ny.gov/outdoor/7935.html.

Locally the fishing has slowed down lately. Rick Miller in Irving commented that the perch schools have broken up and the fish are not hugging the bottom which is a typical post-spawn pattern. The nocturnal walleye bite on the spawning sites has also slowed down. Captain Larry Jones, the President of the Eastern Lake Erie Charter Boat Association, announced that locally the charter captains can finally start up with a number of safe distance COVID-19 safety protocols, including face masks, gloves and sanitizer usage.

Whatever it takes. Jones had good luck fishing during the daytime off the windmills in Buffalo in 20-30 feet of water . He was bottom bouncing with 3 ounces of weight, towing Indiana blade worm harnesses in firetiger pattern. The walleye have moved deeper on Chautauqua Lake, zoning in at 15-16 feet. Target Mayville to Prendergast using stick baits in perch pattern. Night-time trolling for walleye at Barcelona has moved shallow in 8 to 10 feet of water east of the boat launch. There’s a nice crappie bite happening at Silver Lake using white or pink maribou jigs in 10-12 feet. Salmon fishing on Lake Ontario in 50 to70 feet of water out of Olcott using fluorescent orange stick baits or flasher fly combos is producing limit catches daily.

If you have a fishing or hunting story you would like to share, give me a call at 366-1772 or 467-2079. Note that I write my column by Thursday evening due to new changes at the OBSERVER.

Calendar: Southtowns Walleye Association 2020 walleye tournament will be a go. The association, as a group, will adhere to safety protocols and will be following all federal, state and local mandated regulations. Despite the COVID-19 pandemic the organization remained optimistic that it would still be able to conduct the annual walleye tournament scheduled for June 13-21, but it is still working out the details on weigh-in sites. Weigh station attendants will be wearing masks and gloves as well as liberal usage of sanitizer for mutual safety. No large groups of people will be admitted during the process.

The annual post tournament picnic, however, will be canceled, with a possibility of another event later in the year. Members and potential members can still renew their memberships, sign up for their walleye derby, register the kids for the Kid’s Day event, or volunteer for working a weigh-station spot, all by going to its website at www.southtownswalleye.com. Dues are $50, tournament fee is $50 and walleye wallet is $5. Calcuttas are also optional.

One can also keep in touch with the club by calling (716) 649-8202 and leaving a message. The SWA club sends word that they have secured all of its corporate-day sponsors for 2020, so once the virus threat is over, it can hit the ground running. For more details, go to Facebook at www.facebook.com/SouthtownsWalleyeAssociationOfWnyInc/.

Here is the latest update on changes for SWA tournament 2020. The Federal Government has issued restrictions on crossing over into Canada at least until June 22. Therefore, SWA anglers competing in the walleye tournament this year will NOT be allowed to enter fish caught on the Canadian side. The only way this rule could change is if the ban is lifted on or before June 10. Former participants in the SWA tournament will be receiving reminder cards in the mail. Deadline for entries in the mail is today. One can also call the club to enter via telephone on June 4, or June 11, from 5:30 p.m. until 7:30 p.m. and June 12 from noon until 6 p.m. The club will also be open at that time if one wants to stop and pay. However, one will wait in his car until called to maintain crowd control/safe distancing. One can also enter by stopping at Bill’s Hooks, Dave’s Bait Tackle , Westfield Bait & Tackle and Cabela’s. Entrants are expected to exhibit good sportsmanship and obey safety and fishing rules.