Expect a lot of traffic out on the lake 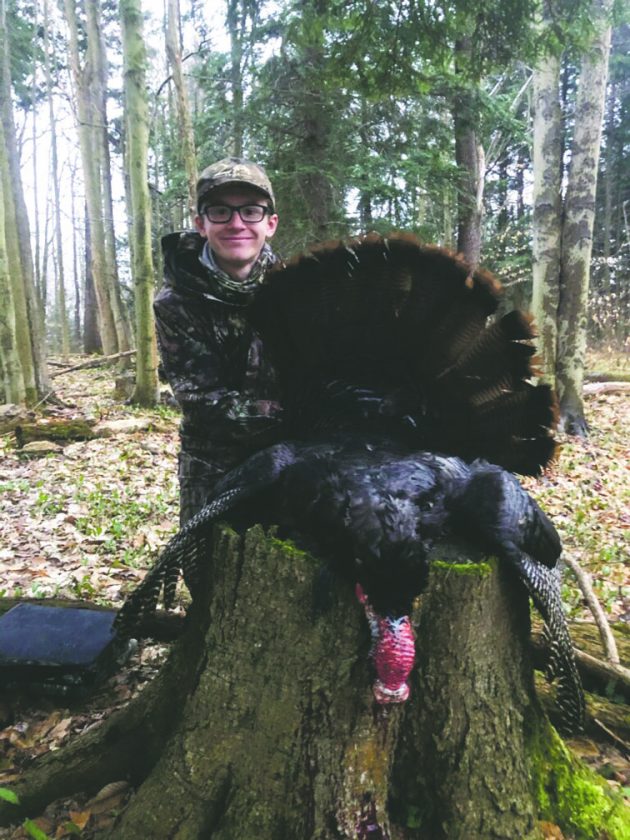 Adien Gatto is pictured with a nice gobbler taken during the Youth Turkey Hunt, weighing over 20 pounds. OBSERVER Photo by Gene Pauszek.

With nice weather in the forecast, anglers can expect some good fishing over the Memorial Day weekend. Offshore anglers have been hitting the traditional walleye spawning areas after dark, with numerous anglers reportedly catching fish, including limit catches. Long line trolling straight rapalas in black silver or black gold finishes are a good starting point in size 9.

Expect a lot of boat traffic when the weather is nice, which will include “interesting” trolling patterns. As many as 200 boats have been spotted off Van Buren area and even more off Hoaks and Wanaka. There have been reports of daytime success by anglers fishing around the 50-foot mark and bottom-bouncing with worm-tipped harnesses.

Offshore fishing for yellow perch continues, with Rick Miller in Irving reporting numerous boaters heading out when the weather allows. Catch rates vary, but the fish have moved closer to the mouth of the “Cat” in depths of 50 to 62 feet of water.

The out-of-state bass boaters are becoming more frequent locally, and Bill’s Hooks has been able to open up, while observing safe distance and facemask protocols. Captain Larry Jones gave a report that the walleye action on Chautauqua Lake continues to be good, with lots of fish in the four-pound range. Anglers have been reporting hooking up with one-to-three muskies per night time trip.

Last Friday, while talking with Jim Skoczylas, the vice president of South Towns Walleye, discussing the upcoming walleye tournament, Jim had to hang up abruptly. Ten minutes later, Brian and Amy Plecas of SWA called and informed me that Jim had hooked a walleye and was retrieving it when the line suddenly peeled off about 100 feet. The fish got “heavy”. Slowly reeling it in, the fish got lighter. Jim had hooked an 18-inch walleye that got attacked by a 40-plus inch musky. As it got near the boat, the musky let go and Jim was able to land his 18-inch walleye. That’s a fish story!

The north end of Chautauqua Lake has picked up for walleye action at night, off the mouth of Mud Creek and by the Boy Scout camp. You can’t go wrong trolling with rapalas in perch pattern or silver or gold/black.

Try your luck for bull head action in Memorial Park after hours, and Cattaraugus Creek for bass and some catfish action. After that heavy rain earlier this week, anglers might find bass and catfish in Canadaway Creek in the deeper holes closer to the mouth. Anglers have been having some success trolling for walleye during the daytime in 50 feet of water off Dunkirk and out of Barcelona off the mouth of Chautauqua Creek, bottom bouncing. Lake Ontario is “on fire” fishing out of Olcott and the bar in 50 feet of water using fluorescent orange stick baits. Be safe!

Calendar: Southtowns Walleye Association 2020 walleye tournament will be a go. They as a group will adhere to safety protocols and will be following all federal, state and local mandated regulations. Even though they had to cancel the yellow perch contest this year due to the COVID-19 pandemic they remained optimistic that they would still be able to conduct the annual walleye tournament scheduled for June 13-21. They are working out the details on weigh-in sites and how to function while observing mandatory safe distance protocols. Weigh station attendants will be wearing masks and gloves as well as liberal usage of sanitizer for mutual safety. No large groups of people will be admitted during the process.

However, the annual post tournament picnic will be canceled, with a possibility of another event later in the year. Members and potential members can still renew their memberships, sign up for their walleye derby, register the kids for the Kid’s Day event, or volunteer for working a weigh-station spot all by going to their website at www.southtownswalleye.com. Dues are $50, tournament fee is $50 and walleye wallet is $5. Calcuttas are also optional.

You can also keep in touch with the club by calling (716) 649-8202 and leave a message. The SWA club sends word that they have secured all of their corporate day sponsors for 2020, so once the virus threat is over, they can hit the ground running. For more details go to Facebook at www.facebook.com/SouthtownsWalleyeAssociationOfWnyInc/.