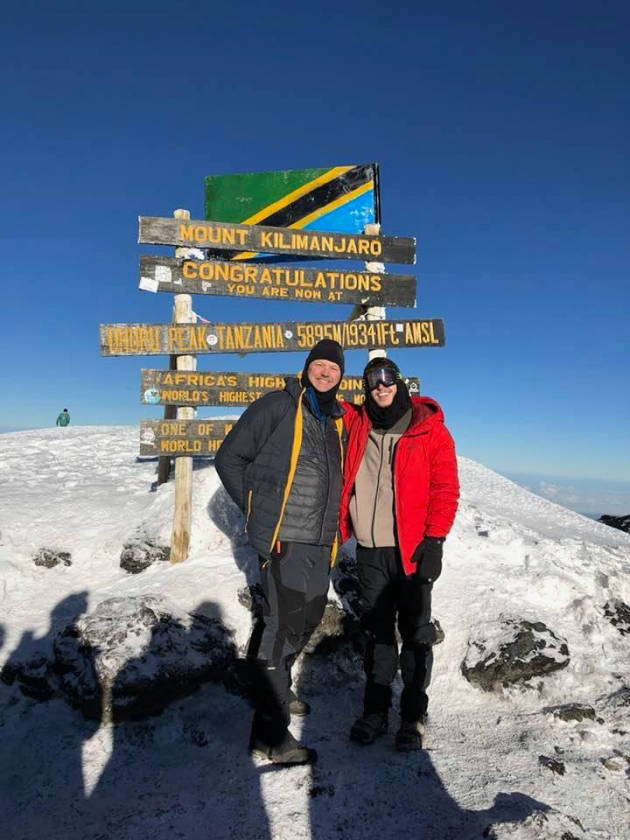 Submitted Photo Above, Dan Reininga (left) and his son Alex (right) stand at the top of Mount Kilimanjaro after their six day climb in January.

For most of the population, summiting the tallest free standing mountain in the world is an improbable feat that most don’t accomplish.

For Fredonia’s Dan Reininga and his family, it was instead their peak of mountain climbing.

Reininga, the President of Lakeshore Savings Bank, is a mountain climbing veteran at this point. He has taken each of this three sons on climbs to different mountains, with his oldest son Mark accompanying his dad on a climb of Mount Rainier in Washington state, his middle son Parker got to climb Mount Whitney in California, but for his youngest son Alex, Reininga had a different task in mind.

“Alex ended up with different bragging rights,” Reininga said. “He freaked out when I told him where we were going.”

While Mount Rainier and Mount Whitney each have an elevation of around 14,500 feet, the Reininga’s next destination was a different beast: Mount Kilimanjaro in Tanzinia.

Mount Kilimanjaro, with an elevation of 19,341 feet, is the tallest free standing mountain in the world, and proved to be the next big step for Reininga and his son.

In January of this year, Dan and Alex Reininga set out for the adventure that would be the first notch on Alex’s belt, and the third and biggest notch for his dad. This time though, there was a more of a purpose behind the trip than just for the exercise.

Partnering with both Worldserve International and Africa 6000, both of which originated in Erie, PA, each member of the climb was asked to raise funds for a water well for the Maasai people in Tanzania. The goal was to raise $50,000 and each of the 20 climbers who went on the was responsible for raising money. The rest of the trip was taken care of by the two companies. It’s certainly a challenge that Reininga was both excited and ready for.

“I got so excited on my way to pick up equipment when I got the call we could go, I started speeding,” Reininga said.

The first few days of their trip were spent traveling, followed by a tour of the Maasai village on Jan. 5, before taking off for the climb on Jan. 7. The climb lasted a total of six days and is both a mentally and physically exhausting experience.

“It’s mind boggling,” Reininga said. “You have to get to the ‘mind over mountain’ mind frame. You have to be in it all day and keep at it all day. If you say you can’t, you’ll never get there and when all heck breaks loose and an avalanche or something comes your way, you have to stay composed as opposed to running silly in the chaos. It’s beautiful when you get to the top but then you realize you have to get back down. Sometimes the downside is more challenging, which I know from the black and blue toenail still on my foot.”

The real reward for Reininga came after the climb though. For as satisfying as summiting Mount Kilamanjaro was, the impact the well had on the people in Tanzania was the true reward, the thought of which still makes Reininga get choked up.

“The most impactful part was seeing the families we were serving with the water well,” Reininga said. “To see how you can change somebodies life with something you take for granted is mind boggling. People have to walk as much as eight hours each way to get water for their families and so many children die from poor water conditions.”

Despite what Reininga did for this climb, his previous climbs weren’t about charity. They originally started as a way for Reininga to really get in shape.

“I became a board member for the bank in 1994,” Reininga said. “In 2010 I was asked to get involved with management. I weighted 340 pounds and I was looking at the need to get back in shape. I just thought what the heck, may as well do something that set a goal for something. I had climbed Mount Rainier with my brother Dave when I was 15 so I set my sights for that again.”

“We did our first run up a 50 foot hill and we probably stopped eight times,” Reininga said. “We were both incredibly out of shape. After a while we started training at Holiday Valley with 50 pound packs on our back, we started to develop some stamina.”

And it’s a good thing they did that training, because the physical taxes that can take hold when climbing are no joke. Reininga said that there are many altitude related illnessess or sicknesses that can happen, and while he didn’t experience any, a few of the climbers in the group of 20 weren’t able to summit.

“We had to hydrate like crazy,” Reininga said. “Five of the 20 couldn’t summit because of the altitude. The worst case scenario for climbing is pulmonary edema. When you get to the base camp at 15,800, there were large gurneys on single wheels that you can be strapped to with a bottle of oxygen.”

Of all his climbs, Reininga said the climb of Mount Rainier with his son was the most intense climb he’s had, due to the threat of avalanches and intense duration.

“You’re jumping crevices and could fall 450 feet one way or another,” Reininga said. “It was a two day climb and we climbed 15 miles between the two days.”

What’s next for the Reininga family isn’t exactly known. Reininga, who turns 62 years old this year, has a couple other goals when it comes to climbing, while still keeping it in the family. The next spot he’s eyeing is Mount Fuji.

“I kiddingly said to my sons that it would be great if we did a mountain together,” Reininga said. “We can do some of the lower height mountains, so Mount Fuji would be a little easier for me.”

In addition to an entire family affair, there is one member of Reininga’s family that has yet to do a mountain with him: His daughter Elizabeth.

“I would love to do some kind of climbing event with her too,” Reininga said. “Maybe someday we can take a look at Machu Pichu.”

At the end of the day, between the charity and the exercise, the other benefit Reininga added was the thrill and satisfaction of reaching the peak.

“Being at the top with your son celebrating is life changing,” Reininga said. “Everyone has an epiphany when they climb, you understand and believe that what we do makes a difference.”