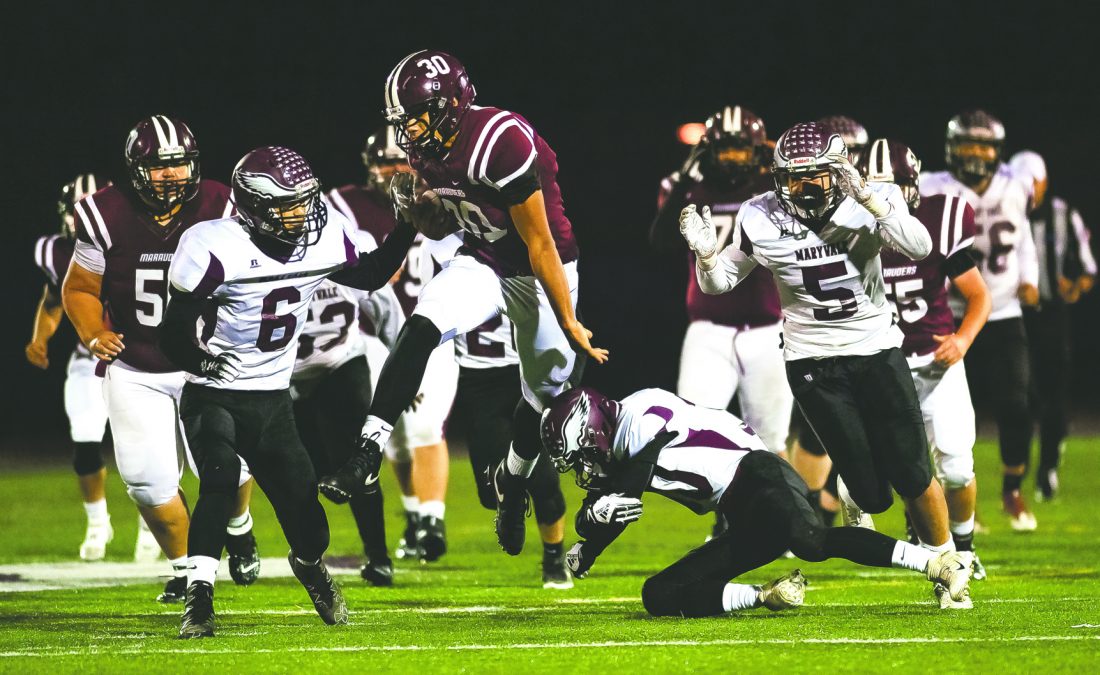 Entering this past football season, the Dunkirk Marauders had a solid roster ready to compete with anyone in Class B. One of the few holes on the roster was at the running back slot.

Then, Pine Valley/Gowanda transfer Christian Ortiz made his name known as the next great Marauders running back.

With the team facing some departures between the previous season, the running back slot was more of an open competition coming into the year, led by returning senior Earl Stewart. When Stewart went down with an injury early in the season, it blew the competition completely open. It was then left to sophomores Jamari Terry, Jayshawn Couser, and Alex Ahlstrom as the incumbents, and a fresh new face in Ortiz.

Ortiz, who went to Pine Valley High School for his sophomore season, moved to his father’s house in Dunkirk over the summer, and was set to make the jump from Class C football to Class B. Ortiz was ready for the challenge.

“He’s very motivated to be the best he can be,” said Dunkirk head coach Mike Sarratori. “He’s a great kid and a great leader and he leads by performance.” 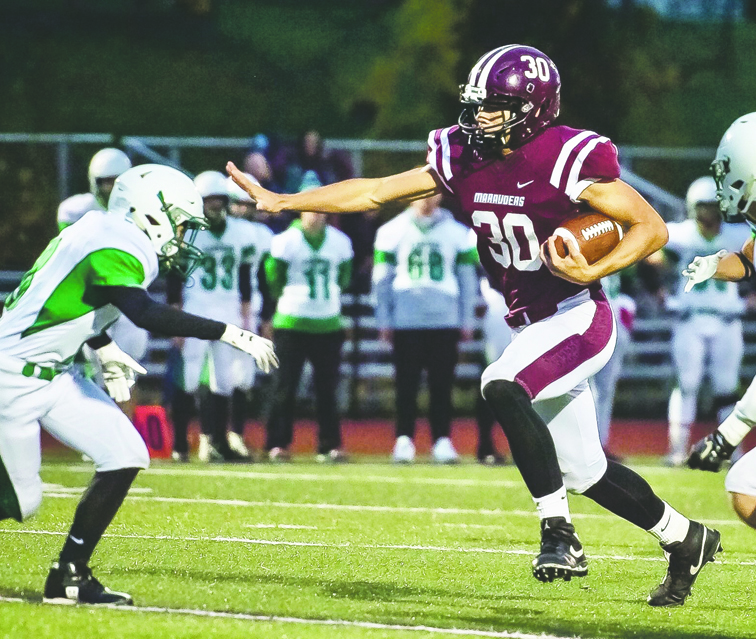 The first thing that stands out about Ortiz is his size. Listed at 6-foot-3, it doesn’t take people long to notice Ortiz, and it certainly didn’t take Sarratori long to get Ortiz to play to his size.

“As much as I would like to be juking kids out, my style is a lot more about running into a group of kids,” Ortiz said. “Sarratori used me because of my size and athleticism. He had me run straight instead of side to side.”

Ortiz was the perfect player for Dunkirk’s style of football, and it worked out that the opportunity had to present itself. But there were some adjustments to be made along the way of course. Going from one school to another means an entirely new playbook, scheme, coaches, and teammates, all of which are hurdles for Ortiz to get over. While Ortiz started off picking things up slowly, he got acclimated rather quickly.

“Christian didn’t come from an offensive system similar to this,” Sarratori said. “There isn’t much dancing. It’s power football, you have to hit the hole quick and strong. Christian started off fairly slow trying to pick up how we call things, and it was a battle once Earl went down.”

Eventually, the running back competition came down to Terry and Ortiz, but Ortiz got hot at the right time and never looked back.

“He had his work cut out for him,” Sarratori said. “When Earl went down, we had to narrow it down to two, it was Jamari and Christian, and Christian got hot. When someone gets hot, we stick with them. It took me to game three before I got comfortable and then things took off from there.”

Ortiz was the new kid on the block last season, but he comes into this next season as a very well known commodity, both at Dunkirk High School and across Section VI. And there is a specific goal Ortiz has in mind for his future.

Ortiz’s desire to play at the highest level is one that many share, but it’s easy to see why the teams at the level would want him. He’s the total package, being incredibly smart, with the raw athleticism and measurables, and the willingness to work. It’s also easy to see where he gets his inspiration from.

Gilberto Ortiz II, Christian’s brother, plays D-II football at Edinboro and has been a large influence on Ortiz growing up. While Ortiz isn’t necessarily looking to be better than his brother, he certainly looks up to his older sibling.

“My brother has had a huge impact on me,” Ortiz said. “With him being four years older than me, I watched him play from Little League until the day he signed, and see the challenges he’s facing now. He showed me all the hard work you have to put in.”

Due to the COVID-19 pandemic, Ortiz’s ability to workout conventionally is postponed. Fortunately, he can still train with his brother to further his goals.

“With quarantine and not being able to go to the gym, I can still go to the field and do field work with my brother,” Ortiz said. “We can do cone drills and strength training at home. You have to use what you’ve got.”

His goal to follow in his brother’s footsteps is something Sarratori noted as well. Moving on from an excellent junior season, some of the focus for Ortiz shifts to him getting recruited. One thing in his favor for getting recruited is that he’s self-aware, both of the things he does well and his flaws, meaning he knows how he needs to improve himself.

“I need to get more shifty,” Ortiz said. “I’m pretty much a straight runner, teams can adapt if they see me not getting better. They can see ‘Oh Ortiz, the big kid, he goes straight.’ I always need to work on my strength and speed but I need to be able to adapt.”

And while some colleges have reached out to Sarratori about Ortiz — eight so far, according to Sarratori — he doesn’t have any of his game film out yet. While film is something he’s also working on, Ortiz knows nothing is a guarantee even once his highlight reel is complete.

“Film is a big part of what I’m missing,” Ortiz said. “I’m working on that now. I’m definitely cutting it close entering my senior season. Other coaches have seen how much I want to accomplish this. It’s difficult and nerve wracking. You could be a really good player and get no notice. At the same time, the simplest things could get you noticed. You don’t know what chances you’re going to get.”

Ortiz has already surmounted the big step of getting noticed at his own school, both on and off the field. His dedication and selflessness as a teammate, in addition to his play, led Sarratori and the coaching staff to already name Ortiz as a captain going into next season for the Marauders.

“When they realized I had potential to be great at Dunkirk, after practices I would go to them and ask what I could do better, and they’d actually tell me instead of sugar-coating,” Ortiz said. “I loved the feedback, and used it to my advantage. Even though the season is over, Coach Sarratori and all the coaches are setting me up for college and outside of Dunkirk.”

From stepping on the field at Dunkirk for the first time to securing the running back spot for good, Ortiz has already made some great memories at Dunkirk. But with his sights set on his future, Ortiz is hoping to propel his success at Dunkirk into much more at the next level.