Submitted Photo In this July 2006 file photo, Dick Barton and his crew celebrate after they won the World of Outlaws Late Model Series race at Stateline Speedway.

OBSERVER File Photo Dick Barton poses in front of some of his memorabilia that is on display at the Chautauqua Sports Hall of Fame. 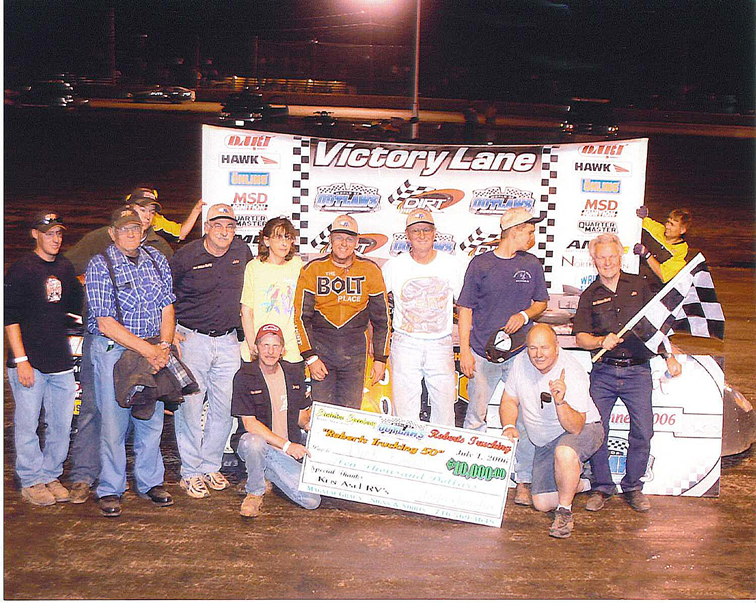 Submitted Photo In this July 2006 file photo, Dick Barton and his crew celebrate after they won the World of Outlaws Late Model Series race at Stateline Speedway.

The drivers who descended on Stateline Speedway a week ago came from Kentucky, Arkansas, Georgia, California and West Virginia. They came from Louisiana, Ohio and Pennsylvania.

As members of the World of Outlaws Late Model Series, these guys are the pros of the sport, men who make their living touring the country in pursuit of the checkered flag.

So when Dick Barton, whose Ashville home is but a short drive from the track on Kortwright Road in Busti, found his way to victory lane last Saturday, the win set off quite a celebration among his race team.

“This was the first time in the three-year history of the World of Outlaws late Model Series that a true local driver has beaten the touring professionals,” said Lakewood resident Randy Anderson, who is a Barton team member and local racing historian. “It’s kind of like an amateur winning on the PGA Tour.” 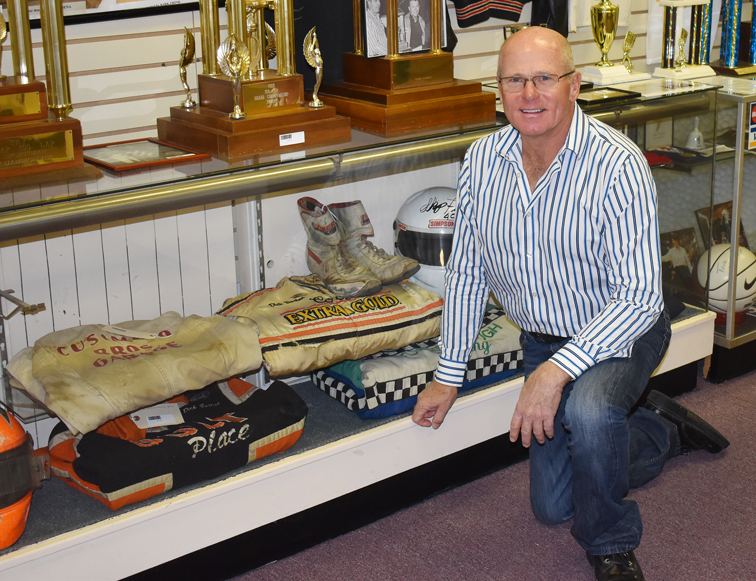 OBSERVER File Photo Dick Barton poses in front of some of his memorabilia that is on display at the Chautauqua Sports Hall of Fame.

In other words, Barton aced what might have been his biggest test in nearly 30 years behind the wheel, recording the fastest lap in the 51-car time-trial, and then winning his heat, the pole-position dash and finally the 50-lap feature.

“That is a significant amount of money,” Anderson said. “There have only been a handful of races in the 50-year history of Stateline that have paid $10,000 or more.”

But the money, while certainly nice, was secondary to the magnitude of the victory.

“The whole team was just very, very happy,” said Barton, whose 200-plus career dirt late-model feature wins have come primarily at Stateline, Eriez (Hammett, Pa.) and Raceway 7 (Conneaut, Ohio). “We’ve won bigger races (money-wise), but we’ve never won (a race) with the prestige of this one.”

Barton’s margin of victory was 0.576 seconds over John Blankenship of Williamson, West Virginia. Darrell Lanigan of Union, Kentucky was third, Steve Francis from Ashland, Kentucky was fourth and Billy Moyer of Batesville, Arkansas was fifth.

“The week before at the ‘King of the Hill’ we earned a guaranteed spot in this week’s race,” Barton said. “When we went to the track, we had confidence that we were at least in the show.”

But there was at least one nervous moment.

“On lap 29, I ran into lapped traffic,” Barton said. “I thought, ‘I’ll just pass these guys on the outside.’ But the second-place guy got underneath me. I was able to get back in front and made the commitment that I wouldn’t leave the bottom for the rest of the race.”

When the race was over, Barton went, well, nuts.

“I jumped up on the car,” he said. “I’m not ashamed of it. It was a spontaneous thing. It was nothing more than me being me.”

“Ron’s daughter was there, so she was well aware of the whole evening’s proceedings,” said Barton, 51. “They (the Nielsons) were patient the last couple of years while we were sorting out the new way.”

The “new way” required that the team change the manner in which they set up Barton’s car to keep up with the competition. After some adjustments, it’s starting to pay dividends.

“The cars were changing. To teach us old dogs new tricks isn’t necessarily an easy deal, but that shows the competitiveness of our team. At this point in my career, I should be thinking about rocking chairs and the porch. Instead, we are concerned about this new way of setting up race cars. We can’t stand not to be competitive.”