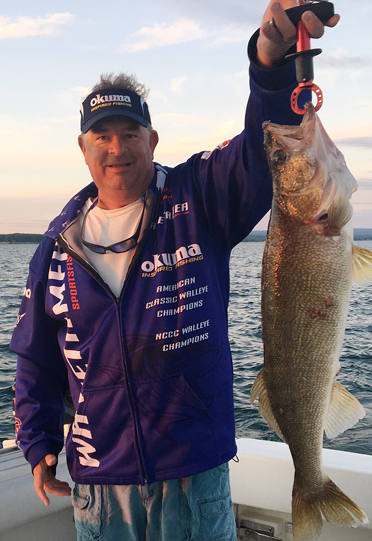 After almost an entire week of sunny skies, easterly winds that were manageable for the latter part of the week, and temperatures that were almost too hot, the catch ratio of walleye was less than desirable for many.

For instance: The week before, many anglers were reporting decent catches of walleye in the 22- to 26-inch range. The Barcelona area was reportedly producing better numbers of fish, and all four ports were productive. Then a storm on Sunday turned the lake over and affected the water temperature, resulting in a reduction of fish for most of the anglers, but not all. This column is written on Thursday evening and at that time the official results of the 36th annual Southtowns Walleye Association Tournament were not posted.

The official results will be posted on Sunday. There were reports of at least three 11-pound walleye entered this year, as well as several 10-pounders. The payout will be at least 200 places and the fish entered had to be a minimum of 26 inches in length for prize consideration.

Captain Don Ruppert of Wave Tamer Charters was able to come up with a fish-catching game plan last week. Ruppert reported that his crew boated more than 200 fish last week. Location, location, location, was important and east was the hot spot. That was part of the solution. Fishing first light also played a role in their success.

The guys found that the walleye were in 50 feet of water from 5- 6:30 a.m. Then they moved deeper to the 60- to 70-foot mark. The fish were spooky so fishing off to the side was important. Neutral-colored stick baits were important, like silver/black, white/pink, black/purple, instead of the flashy colors. Even trolling direction played a role. Heading north/south instead of an east/ west approach, played a role.

The fish were high, too, as using three colors of lead core line was most productive. No arguing with success. By Monday, the fishing effort subsided. That nine-day tournament in all that heat , was brutal. The wind has changed direction and kept a lot of the fisherman on shore. On Friday the Eastern Lake Erie Charter Association intends to take the Western New York Heroes Veterans group out for a half day of fishing. The COVID-19 pandemic has limited the event to 50 candidates, with no weigh-in, or dinner afterwards, but a box lunch and a good time will be provided nonetheless. I’ll keep you posted. Captain Larry Jones reports that the night bite for walleye has returned by the small boat harbor with the fish near the breakwalls in 20 feet of water. Use stick baits. The muskie bite is on fire on Chautauqua lake with anglers reporting hook-ups with three to five fish daily. A 51-incher was reported this week. At the south end of the lake, in the middle of the lake in 16-17 feet, has been productive. Five-inch body baits are the go-to lures. Fishing the weedline edges with worm harnesses, while bottom bouncing has been working on walleye.

¯ The Southtowns Walleye Association 36th annual derby ended on June 21 at 4 p.m. Results will be announced this Sunday.

¯ The Big Dawg Walleye tournament, which was scheduled for this today, reportedly has been canceled. The COVID-19 pandemic played a role in canceling this year’s event and the weather forecast for today didn’t help. There is some consideration that a later event might happen, but nothing concrete.

¯ The Sunset Bay Shootout will take place this year with mandatory health precautions as dictated by the health authorities going into effect. The captains’ meeting for this year’s event will Thursday July 15. Big Fish Friday will launch on July 16 with the weigh-in at 4:30 p.m. on the beach. The main event will take place on Saturday July 18 with the weigh-in at 4:30. Due to the social-distancing protocol, the awards will take place on Sunday morning at Cabana Sam’s, if possible. Jim Steel’s walleye tournament, scheduled for August, is likely, with COVID requirements also coming into play.