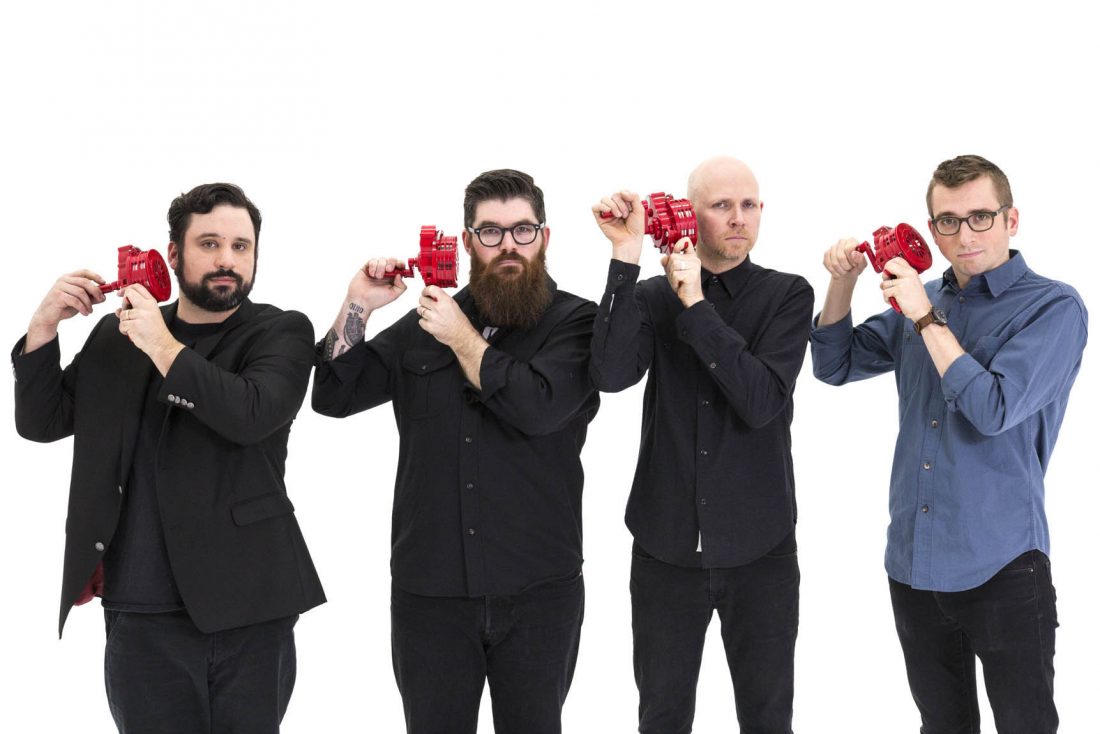 World-renowned innovative ensemble, So Percussion, will perform Wednesday at 8 p.m. in Rosch Recital Hall at SUNY Fredonia. A master class will also be presented at 4:15 p.m. the same day.

The world-renowned So Percussion, an ensemble that creates and presents new collaborative works, will perform a public concert at Rosch Recital Hall at the State University of New York at Fredonia on Wednesday, Sept. 11, at 8 p.m.

Tickets are $6 for students and $12 for the general public and can be purchased at the door or through the Fredonia Ticket Office in the Williams Center.

A master class at 4:15 p.m. the same day, free and open to the public, that covers composer/performer collaborations and the entrepreneurial aspect of the ensemble and its members’ careers, is also part of So Percussion’s campus visit, which has been arranged by Ethos New Music Society, the Fredonia Percussion Guild and the Student Association.

So Percussion has received accolades from The New Yorker magazine, which applauds its innovative multi-genre original productions, interpretations of modern classics and “exhilarating blend of precision and anarchy, rigor and bedlam.” The New Yorker says So Percussion has redefined the scope and role of the modern percussion ensemble, placing it at the leading edge of 21st-century music.

At its Fredonia concert, So Percussion will perform “Babybot” by Andrea Mazzariello; “a diamond in the square” by Suzanne Farrin; “Torque” by Vijay Iyer; and “Forbidden Love” by Julia Wolfe.

So’s repertoire ranges from “classics” of the 20th century, including those by John Cage, Steve Reich and Iannis Xenakis, to commissioning and advocating works by contemporary composers such as David Lang, Julia Wolfe, Steven Mackey and Caroline Shaw. The ensemble also presents distinctively modern collaborations with artists who work outside the classical concert hall, including Shara Nova, the choreographer Susan Marshall, Wilco’s Glenn Kotche, The National, Bryce Dessner and many others.

The ensemble composes and performs its own works — including “From Out A Darker Sea” and “Amid the Noise” — employing a distinctively 21st century synthesis of original music, artistic collaboration, theatrical production values and visual art. The culmination is a powerful exploration of the members’ own unique and personal creative experiences.

A return to Carnegie Hall for “A Percussion Century,” a sprawling exploration of works by John Cage, David Lang, Johanna Beyer and others, and featuring the New York premiere of So’s newest commission, “Forbidden Love,” a string quartet by Julia Wolfe, is a milestone of the ensemble’s 2019-2020 season.

So is celebrating its sixth year as the Edward T. Cone Ensemble-in-Residence at Princeton University. So has recorded more than 20 albums; appeared at Carnegie Hall, Lincoln Center, Walt Disney Hall, the Barbican, the Eaux Claires Festival, MassMoCA, and TED 2016; and performed with Shara Nova, Bryce Dessner, Jad Abumrad, JACK Quartet, Buke and Gase, the Mostly Mozart Festival Orchestra, the Los Angeles Philharmonic and Gustavo Dudamel, among others.

Rooted in the belief that music is an essential facet of human life, a social bond and an effective tool in creating agency and citizenship, So Percussion enthusiastically pursues a growing range of social and community outreach.