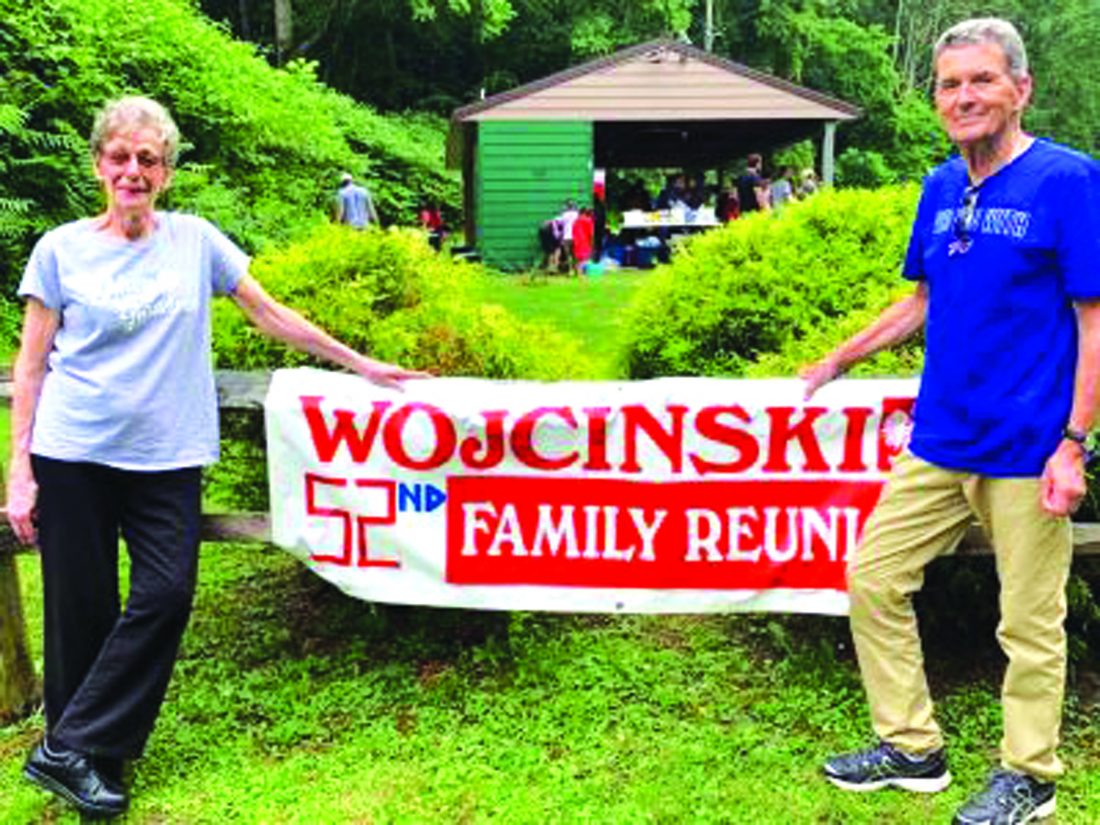 Submitted Photo Rita Kucharski of Erie PA and Tom Zielinski of Van Buren, were the oldest living female and male descendants in attendance.

Perfect weather greeted the more than 45 descendants of Michael and Mary Wojcinski that gathered at the Hamlet Street pavilion of Russell Joy Park in celebration of their 52nd annual reunion on Sunday, July 28. Hosting this year’s reunion was the committee consisting of Pamela Wojcinski-Edwards, Janet and Ron Balzer of Columbus, IN and Michiah and Jaclyn Wojcinski of Fredonia. Festivities began at 12 p.m. with a lunch of beef on weck, baked chicken, assorted side dishes and reunion cupcakes for dessert. The family meeting was held after lunch, concluding with the traditional singing of the “Wojcinski Reunion Song.” The ‘White Elephant’ auction was held later in the afternoon, hosted by Michiah Wojcinski, with many prizes awarded to enthusiastic attendees. The evening activities included a hot dog and corn roast, brownies for dessert, along with the annual Horseshoe and “Washoe” competitions and pinochle tournament.

Recent information obtained from online resources has revealed another generation of Wojcinskis, hailing from the Janowiec area of Poland. Lorenz and Catherine (Tacka) Wojcinski have been identified as the parents of Michael Wojcinski. In addition, a stronger connection to Michael’s brother, Lawrence Wojcinski has been made and we now know a clear connection between that branch of the family, who resided primarily in the Buffalo area. Natalie Marczak, of Getzville, NY and Joan Kaus of Annandale, VA are the two remaining direct members of the fourth generation of Wojcinskis. Steve Kaleta, although not in attendance, is recognized as the last remaining member of the original reunion committee in 1967. Rita Kucharski of Erie PA and Tom Zielinski of Van Buren were recognized as the oldest female and male descendants in attendance. There was one death to report, that of Susan Stempien of Dunkirk, who passed away on Easter Sunday 2019. A moment of silence was observed in her memory.

Two weddings occurred or will take place this year — on July 20, 2019, Allison Wojcinski, married Joshua Richir. Allie is the daughter of Robert “Bobek” and Connie Wojcinski, and she is the great granddaughter of the late Phil and Mary Ann Wojcinski.

The couple resides in Fredonia. Also, on August 10, 2019, Jared Koperczak will marry Jaclyn Van Zile. Jared is the son of Amy and Lyle Koperczak of Campbell, NY. He is the grandson of the late Henry and Eleanor Wojcinski. There were two engagements announced; Leah Woodard will marry Ian Henry of Buffalo on September 12, 2020. Leah is the daughter of Lori and Winston Woodard. Also, Kevin Rosplock, son of Sharon and Jim Rosplock of Dunkirk is engaged to Gianna Rio with a date TBD. A special “1st” happened at the 52nd reunion — a surprise engagement took place, with Kyle Benedict proposing marriage to Brianna Martinez. Kyle is the son of Monica and Bob Benedict of Twinsburg, OH, and the grandson of Rita and Ken Kucharski of Erie, PA.

In other news, after more than 40 years in business, proprietor of “Bobek’s Transmission Shop,” Bob Wojcinski is officially retiring. Also, his daughter Mallory and his wife Connie Wojcinski were recognized for five years of volunteer service at Roswell Park.

There are two members of the family serving in the Armed Forces: Blake Benedict, son of Monica and Bob Benedict, recently graduated from the Great Lakes Naval Academy and has been stationed in Pensacola, FL. Tech Sergeant Alex Dean is stationed in Wichita Falls, TX as an instructor. Alex is the son of Kathy and the late Bruce Dean, grandson of the late Bob and Helen Kittell. Michiah Wojcinski recently officially retired from the Navy, and he is the son of Roseann and the late Ken Wojcinski, grandson of the late Art and Esther Wojcinski.

Traveling furthest to attend this year’s reunion were Natalie and Tim Frank of West Palm Beach, FL. The first reservation was submitted by Lori and Winston Woodard. Michiah Wojcinski won the Horseshoe title and teams Allison and Josh Richir and her sister Mallory Wojcinski and Lori Woodard tied for the Washoe title, with junior champions Izak Wojcinski and Willow Koperczak. The pinochle champs are, once again, the Wojcinski Sisters, Amy Koperczak and Lori Woodard, who trounced last year’s “whiners” Ken Kucharski and Winston Woodard in championship play. 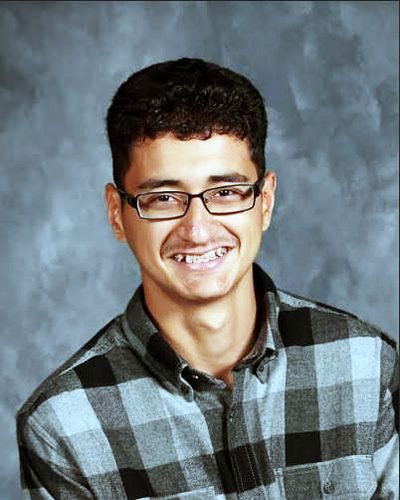 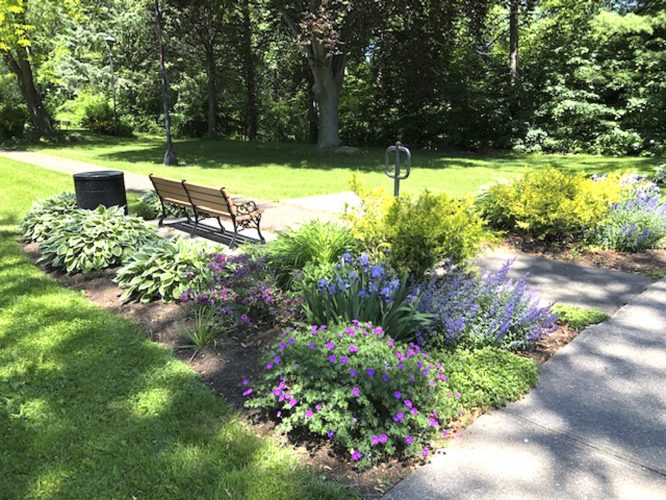 NATURAL SETTING IN OUR BACK YARD 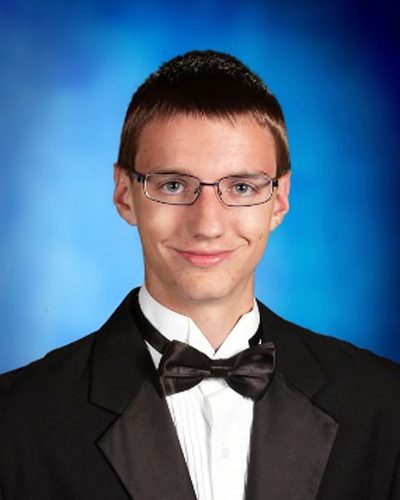 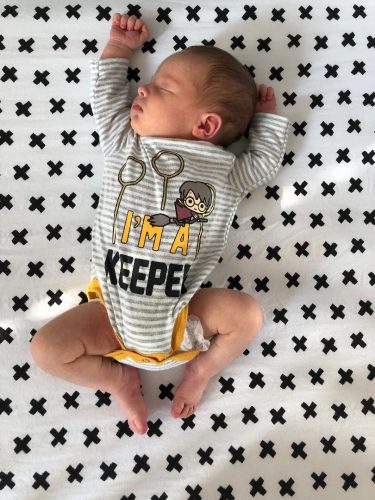 For those of you in the Dunkirk-Fredonia-Jamestown area who have read this column for two and a half years, I’m ...