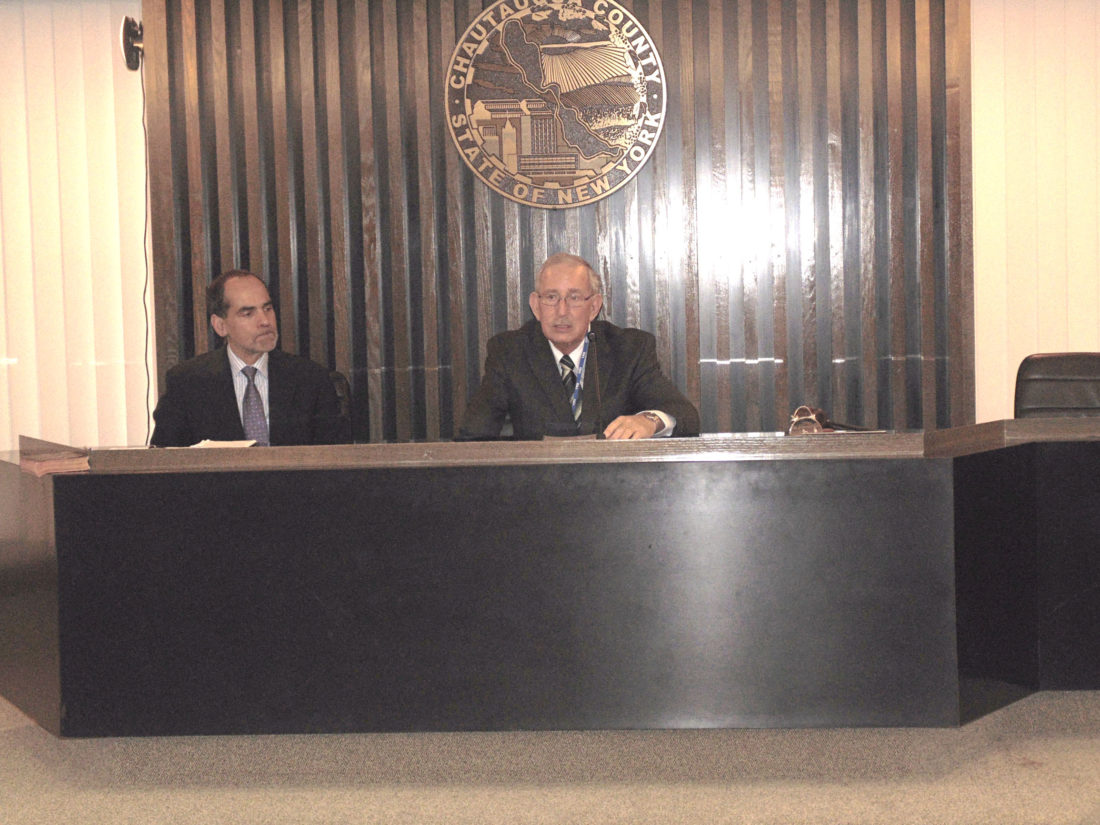 OBSERVER Photo by Jimmy McCarthy Dave Himelein, right, addresses the County Legislature after being nominated chairman during Tuesday’s organizational meeting. Himelein, R-Findley Lake, expressed gratitude to legislators for putting their confidence in him.

MAYVILLE — With a new year comes a new chairman and more big issues to tackle for the Chautauqua County Legislature.

Legislators convened for an organizational meeting Tuesday afternoon at the Legislative Chambers in Mayville. One of the first orders of business was nominating a new chairman after Frank “Jay” Gould left the post in December. Legislators unanimously picked Dave Himelein, R-Findley Lake, as the next chairman.

Himelein is no stranger to leadership positions within the legislature. In 2014, he was picked to become majority leader for the Republican caucus. Prior to that, he served as assistant majority leader as well as chairman of the Public Facilities Committee. Himelein represents residents in District 18, which consists of the towns of Chautauqua, Sherman and Mina.

The new chairman began by expressing thanks to his wife, the legislature and county staff for their support throughout the journey. Himelein said he knows the responsibilities that come with the job, having worked closely with Gould, R-Ashville, who will take Himelein’s spots on the Public Facilities and Audit and Control committees.

“I did spend a fair amount of time in his office before each meeting. We would go through and talk over a few things here and there,” Himelein said. “The same with (County Executive) Vince (Horrigan). He’d stop in and talk about things. I just picked it up.”

“They’re going to do a good job. I talked to both of them beforehand. I know they’ll do a very good job,” Himelein said.

Democratic leadership remains unchanged with legislator Charles Nazzaro, D-Jamestown, as minority leader and legislator Bob Bankoski, D-Dunkirk, as assistant minority leader. Nazzaro is a ranking member on the Audit and Control Committee and a member of the Public Facilities Committee. Bankoski serves on the Public Safety Committee.

Big issues legislators are likely to confront this year include sewering around Chautauqua Lake and police consolidation. Himelein said consolidating police forces with the city of Jamestown will be debated thoroughly with a number of pros and cons to examine. As for sewering around Chautauqua Lake, Himelein said it will take time as they continue to work with the New York State Department of Environmental Conservation. Keeping property taxes down and more infrastructure improvements are also among the list of initiatives for 2017.