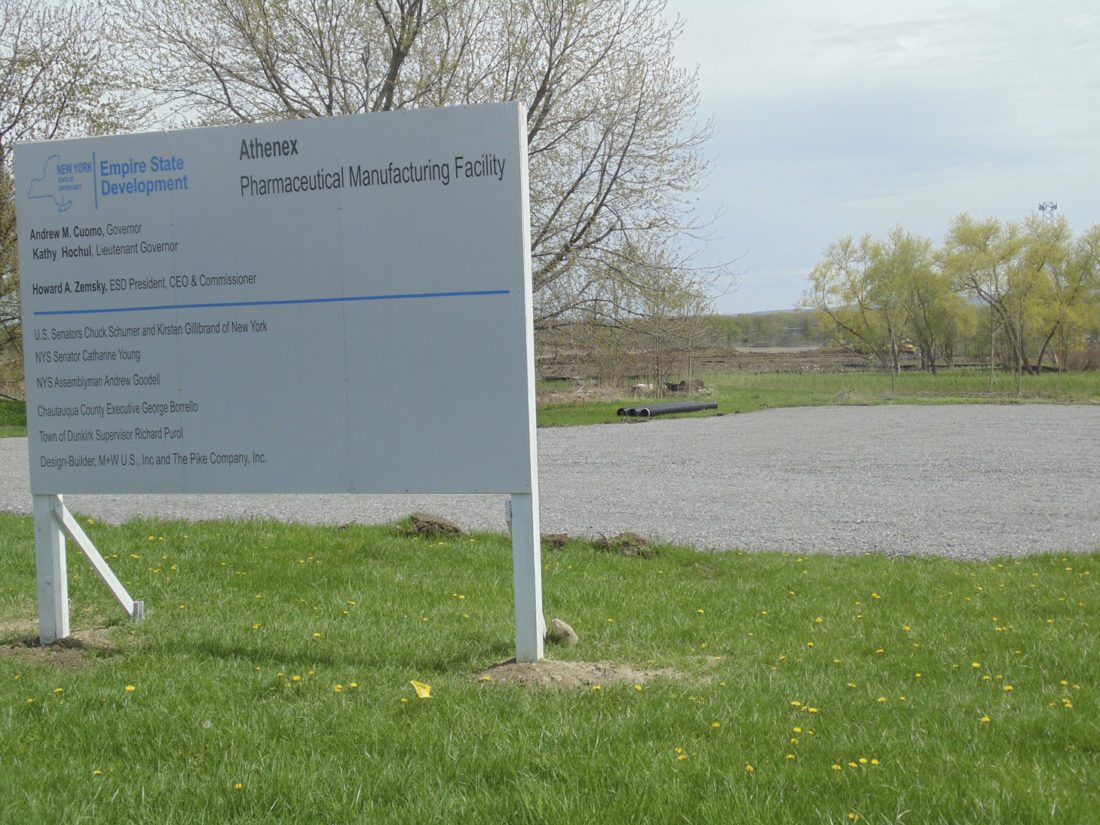 OBSERVER Photo by Jimmy McCarthy Two signs are placed in front of the site where the Athenex plant will sit on Lake Shore Drive East in the town of Dunkirk.

Along Lake Shore Drive East in the town of Dunkirk, a sign depicts the coming of project state and local officials deem as a game-changer. Another large board next to that lists officials from various levels who helped make the project possible.

Looking beyond those signs on any given work week, one can see heavy machinery and workers onsite clearing and leveling land for the emergence of Athenex’s state-of-the-art, 320,000-square-foot pharmaceutical manufacturing facility.

The work is happening.

“I was happy to see that it’s starting to get going because everyone said it’ll never happen,” said Dunkirk Town Supervisor Richard Purol. “It’s happening and I’m very happy to see it happening.”

It was more than two years ago when Gov. Andrew Cuomo visited Dunkirk to announce a $1.52 billion investment by the biopharmaceutical company Athenex for its oncology manufacturing facility in the town — as well as $200 million in state funds to support the endeavor. The Dunkirk facility will be utilized by Athenex to manufacture sterile high potency oncology drugs, which often show up on the Federal Drug Administration’s drug shortage list, for shipment around the world. The drugs are vital for patients battling cancer. 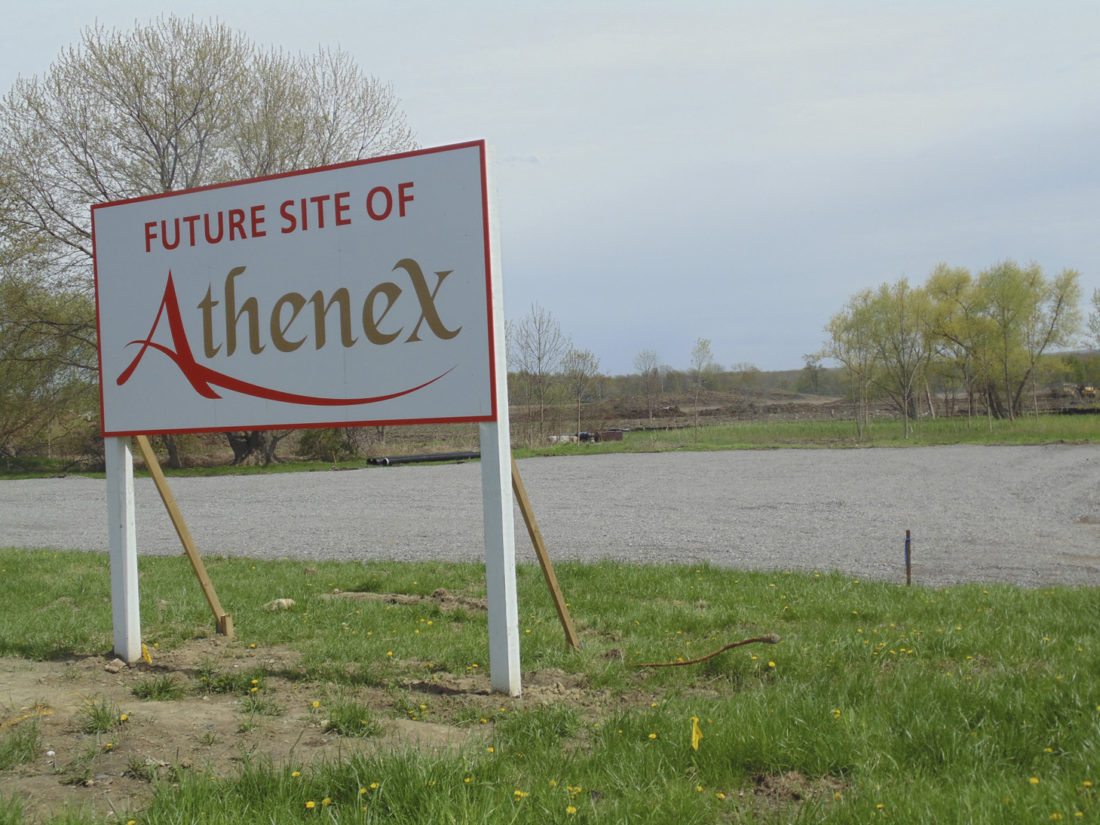 With the facility, the company says it expects the creation of hundreds of jobs — 900 to be exact — ranging from high-tech manufacturing and product formulation to pharmacovigilance.

Teresa Bair, Athenex vice president of government relations and corporate affairs, told the OBSERVER in a recent interview that they’re excited to be at a stage where action is evident onsite. Bair said the company’s moved along quickly for some time now in collaboration with local leaders and development partners.

“For us, this is just another phase of consistent progress with this project,” Bair said. “Now that we have work that’s visible on the site, it’s exciting and very satisfying.”

As to the impact Athenex will have, Purol says it’s bringing numerous opportunities for jobs. 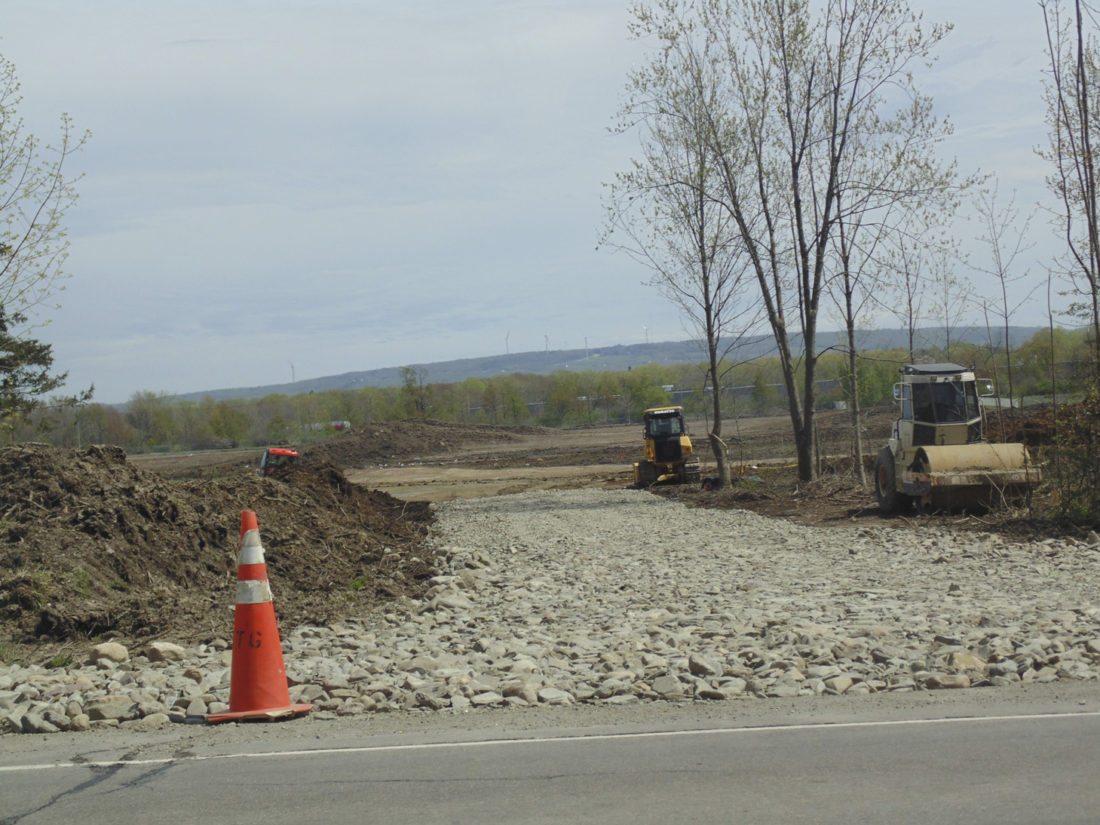 Since the announcement, the project has brought much excitement — and development opportunities — to the neighboring city of Dunkirk. From the announcement to today, Mayor Willie Rosas said the city’s had many inquiries from major developers looking to develop different parts of the city as well as the northern Chautauqua County area.

“We have new housing complexes that are beginning to develop now,” Rosas said. “We’re going to (start) construction on Battery Point Villas, which are right across the street from the Athenex site. I can’t emphasize enough what a major boost to our economy here in this side of the region that we’re having because of this project. This project shows how municipalities, as well as the county and state, are working together to create positive progress in northern Chautauqua County.”

The city also stands to benefit as the water and sewer supplier for the Athenex facility. Revenues are expected to jump for the two accounts.

While Athenex will be a major employer in the region, Bair says they’re also looking to be a community partner in revitalizing the region in collaboration with local leaders.

“We’ll be hiring hundreds of new employees into good family-supportings jobs, and we’re going to be recruiting new residents and their families to the region,” Bair said. “In order to feel the confidence to do that, we’ll be engaging the business community, local elected officials and the education community.”

As to the regional impact, County Executive George Borrello referenced the upscale apartments coming to the city in Battery Point Villas as one of the first private sector, market rate apartment developments in many years. In addition, he said business people will be expanding their capabilities for retail and restaurants because of Athenex.

“It’s a huge impact,” he said. “Even up in my neck of the woods in Silver Creek, people are going to be coming from Erie County for example. They’ll likely get off at the Silver Creek exit to take Route 5 to Athenex site, so that’s going to create traffic flow and more retail business opportunities.”

As part of his 100-plus business stops this year, Borrello visited Athenex headquarters in Buffalo. The visit occurred earlier in the year before site work initiated in April. Despite people at the time talking about the lack of activity, Borrello said Athenex was actively working on the project every day.

“They had an entire conference room dedicated to the Dunkirk project,” he said. “Seeing modifications to the design and meeting engineers, designers and people working full time on the Dunkirk facility, I learned that it was not at a standstill at all. It was an active process.”

Both Bair and local officials credited the collaboration between one another as a key in moving the project ahead. Purol said the town has a good working relationship with Athenex as they continue to meet each month. Bair said everyone in the Dunkirk area has been welcoming to them.

“We could have not made the progress we made in such a short period of time without the collaboration and the partnership from the local entities,” she said. “They’ve worked through the issues with us as they have arisen such that we’ve had no roadblocks or problems moving ourselves forward for a very long time.”

With land clearing underway, concrete laying and construction is expected to begin later this summer. As fall approaches, Bair said they’ll be adding the roof, exterior and glass to the facility. By the end of the year, they expect to have an enclosed and weather-tight structure. Bair said they’re still on track do be up and running during the first half of 2020.

“All of this work will be completely visible and it will be on a daily basis for people to be able to see the progress,” Bair said.

OBSERVER Photo by Jimmy McCarthy Two signs are placed in front of the site where the Athenex plant will sit on Lake Shore Drive East in the town of Dunkirk.