Water and wings: what Chautauqua County stands to lose 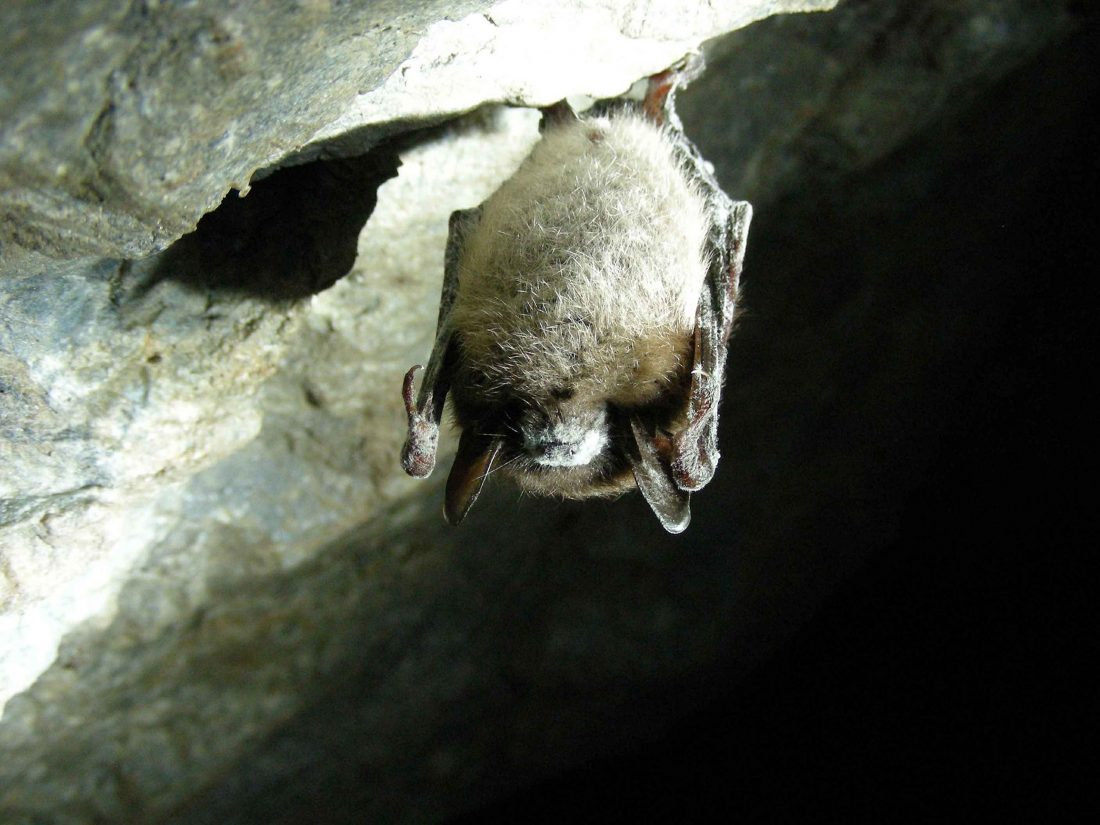 Submitted Photo Little brown bats are one of several bat species that can be found in Chautauqua County. One little brown bat can eat over a thousand mosquito-sized insects in just one hour.

However, Jonathan Townsend, JCC biology professor and bat researcher, is concerned that both stand to be compromised should Cassadaga Wind, LLC’s request to begin tree-clearing, as early as April 1, be granted by the state siting board.

“When bats wake up in the evening, they immediately want to get a drink of water,” Townsend explained. “They need to find a body of water immediately, and the presence of water really helps them thrive.”

While some bat populations in the area, such as hoary bats, migrate south during the fall, cave-dwelling bats form a fall swarm in September and October, Townsend explained. At that time, the bats will mate and hibernate, delaying gestation until spring. In April and May, the bats leave hibernation or begin migrating and fly to their summer habitat (trees in forested areas) to give birth to their pups. By mid- July, most of the pups are flying and building up their fat stores for winter. During this fragile time of development (spring and summer), the bats are particularly vulnerable, and the creation of access roads and tree-clearing could be detrimental, which is why Townsend — and the certificate — limit clearing to Nov. 1 to March 31, when migratory bats have left and cave-dwelling bats are in hibernation.

Creating access roads and clearing trees doesn’t just impact local bat and bird populations, Townsend pointed out. Water quality may be compromised by the construction of roads, transmission lines and turbine pads. “The certificate conditions do a great job at requiring erosion controls, but a large project will still come with unavoidable impacts to water quality from increased sedimentation on current and new roadways,” he stated. 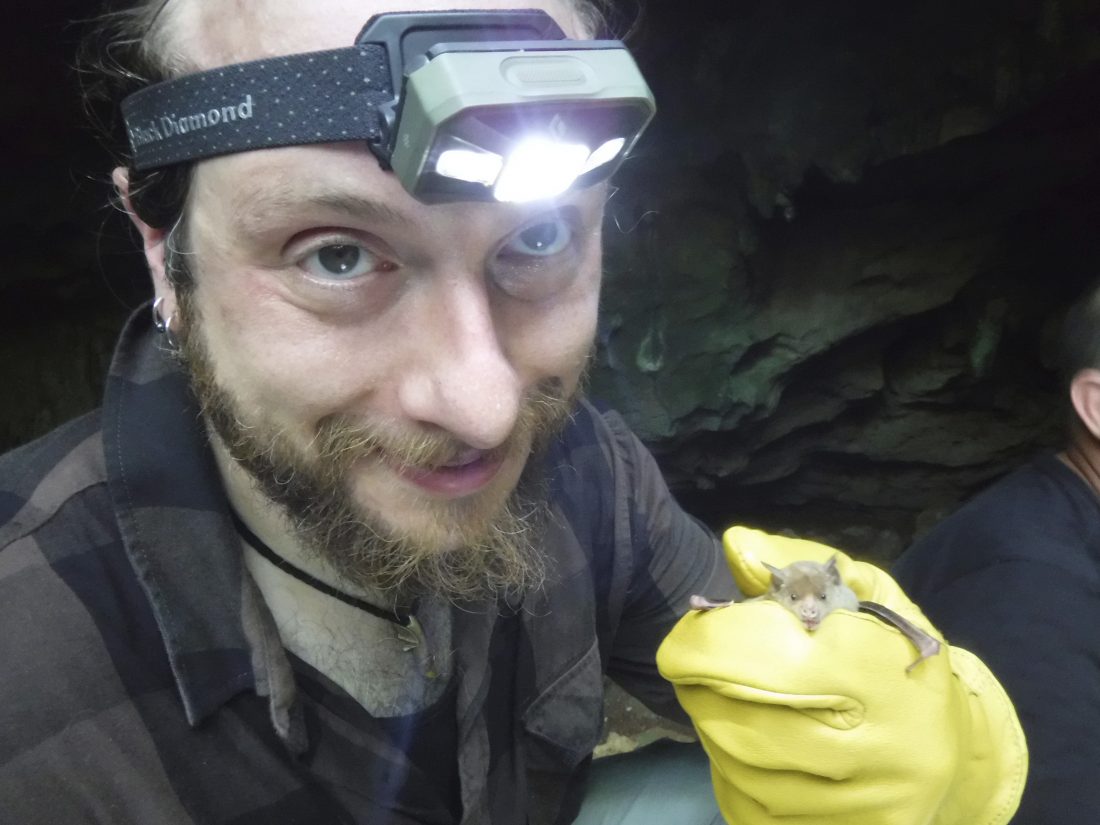 Submitted Photo Jonathan Townsend, JCC biology professor and bat researcher, has devoted his career to teaching others about bats, their importance to local agriculture and their susceptibility to death and injury through disease, habitat loss and wind farm activity.

According to Townsend, issues with erosion, including impacts to wetlands and streams, must be taken into consideration. From Canadaway Creek to Lake Erie, Chautauqua County stands to lose so much if its unique watershed is affected, which in turn, can affect the wildlife that call it home.

Along with their request to amend the certificate, Cassadaga Wind also submitted a Net Conservation Benefit Plan to address bat populations, should permission be granted to begin clearing in April. Plans include leaving all snag and cavity trees uncut (unless removal is necessary to protect people or property) until an “Environmental Monitor” conducts a survey for bats exiting the trees. These trees will be removed within 24 hours of observation. No known or documented roost trees or any trees within a 150-foot radius of a documented summer occurrence may be cut. Lastly, “If any bats are observed flying from a tree or on a tree that has been cut, clearing activities within 150 feet of the tree will be suspended and DEC Wildlife staff will be notified as soon as possible.”

The plan also says that the aforementioned environmental monitor will be on site during all tree-clearing activities, and if any bat activity is noted, a stop work order will be issued until the DEC authorizes otherwise.

Townsend believes that the plan, while a “good step” toward protecting local bat populations, is problematic. “I’m skeptical that having an ‘environmental monitor’ look at a tree one evening is going to document whether there are any bats in there,” he said. “Additionally, there may be bats roosting in the foliage of the trees, so focusing solely on snags and cavity trees would only aid cavity-roosting species, such as NLEB,” he added.

“There’s a lot of reasons why a bat wouldn’t leave a tree.” Townsend said inclement weather, injury or caring for a pup are just a few reasons why a bat may not go out. While the 24-hour window is important to see whether or not bats are returning to a tree, Townsend said, “You’d have to survey each tree for several days or a week for me to be confident that there are no roosting bats there and they can go in the summer to cut trees during maternity season.”

Regardless of how many precautions are taken, Townsend stated simply, “You can get rid of all these potential impacts by simply following the prohibition as it was originally instated in the certificate they were given.”

Townsend acknowledged that this is more easily said than done. “I know that the temptation is there to have a more financially viable project, but if you can’t do it right, then it shouldn’t be done.” To him, wind energy companies’ drive to create more power — and more money — points to a systemic problem and the environment may pay the ultimate price. “As a species, we really need to stop putting as much focus on money. Obviously, we all need it and rely on it. But it’s not the most important thing in the world. We can’t buy back the bats that are being lost,” he said.

More importantly, no other local species or pesticide can compensate for the agricultural loss of a decreased bat population. “In one summer, one big brown bat can control insect populations by over a quarter of a million, and almost all of those are agricultural pests,” Townsend explained. “Little brown bats can eat over a thousand mosquito-sized insects in an hour.”

Additionally, guano (bat feces) is high in nitrogen and other fertilizing nutrients, and is distributed regularly across the landscape by bats in flight. “It’s disgusting if you think about it too much,” Townsend laughed.

For Townsend, facts such as this are part of what make bats so fascinating. Even as a child, he has never been one to feel squeamish about creepy, crawly creatures. Townsend’s interest in bats began in elementary school. “I’d be the nerd in the library looking at books on bats,” he recalled. “The few instances where I’d have a bat in my bedroom, I’d just stare at it and think, ‘That’s really cool!’ The more I’ve learned about them, especially as a biologist, the more fascinating that becomes. And that fascination never stops.”

In addition to managing nature preserves and teaching, Townsend’s bat studies have led him to work with various environmental consulting firms, the DEC and conduct research on bats in the region, including the Hanover and Villenova turbine project when taller heights (up to 599 feet) were proposed. As a consulting biologist, Townsend traveled several hundred miles each week, looking for dead birds and bats under turbines. “There is a lot of evidence suggesting that migratory tree-roosting bats are attracted to tall turbines,” Townsend explained. He noted that areas around turbines are warmer, and that taller turbines may appear to be a more suitable roost for tree-dwelling species, which may attract bats. American Wind Wildlife Institute researcher Taber Allison, Ph.D. points out that taller turbines are more efficient at lower wind speeds, which would increase power losses with curtailment, making the curtailment an even less attractive mitigation measure to wind companies.

Townsend acknowledged the divide that exists among environmentalists, locally and globally. “I know that climate change is real, and that it is a serious issue, and I don’t want to discount that,” he said. “But I think wind energy has done great PR that they’re going to save us from climate change, and a lot of people believe that.” Townsend referenced environmentalist friends who have objected to his thoughts on the matter, but simply said on wind energy, “I just don’t think it’s the answer we’re looking for.” Townsend referenced the massive amount of carbon required in the production and transport of turbine blades and concrete. “Concrete (production) is one of the largest contributors to green house gases — its production, its transport, shipping these blades and transporting them throughout the country. When you look at the net impact, I just don’t think it’s going to help fight climate change.”

Townsend added that clearing access roads, removing forests and pouring concrete turbine pads “disrupts the climate resiliency of the landscape” and that hotter conditions exist under turbines; open fields are naturally hotter than the interior of a forest. He pointed to other alternative energies, such as solar panels on already existing buildings, as a more sensible option for the environment, and looks forward to other forms of alternative energy that are being developed.

Regardless of new technologies that may be coming, Townsend acknowledged that the turbines are already here and more are on the way. “It’s a massive impact and they’re going to be here for a long time,” he said. Speaking of the impacts to the environment, including bats, “We need to make sure we’re doing it the right way if we are going to put them up.”

Will the siting board agree? That remains to be seen, but Townsend has submitted his concerns and research to the DPS as they consider whether or not to grant the amendment to Cassadaga Wind’s certificate. Others may do the same by writing to Kathleen H. Burgess, secretary to the commission of the state Department of Public Service at Three Empire State Plaza, Albany NY 12223 or emailing secretary@dps.ny.gov by Feb. 10.