Protests, petition have look of afterthought 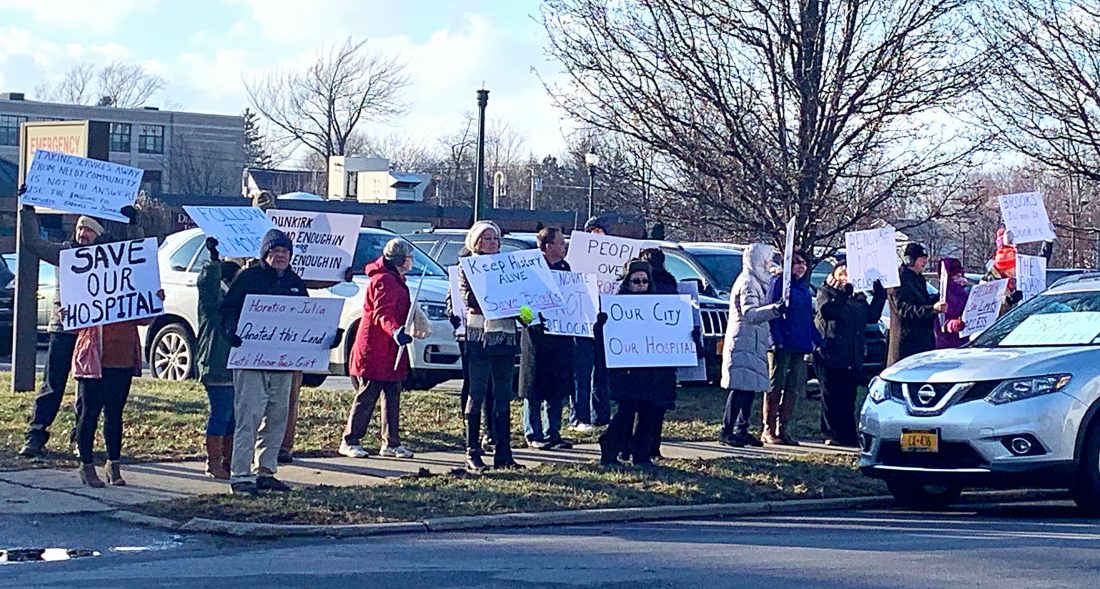 Dunkirk Mayor Wilfred Rosas had turned the page almost weeks after the first announcement came from the Brooks-TLC Hospital System to relocate the longtime health-care facility from the city to the town of Pomfret.

“I want the residents to know the city and my administration did everything and anything possible to keep the (Brooks Memorial Hospital) here in the city,” he said at the Oct. 17, 2017, Common Council meeting. “Unfortunately, that decision does not lie with the city and there was nothing we could do. They have their own governing body and they decided this is what they want to do. My focus now, as mayor, is the repurposing of that property. I would like residents to know we have reached out to the governor’s office through a letter, basically letting them know our sentiments and our feeling that they are using state funds to move the hospital outside the city, essentially leaving a whole downtown city block vacant.”

Before his comments, a number of other city residents came forward to voice their opinions at the meeting about the hospital leaving the city. They cited the importance of the Brooks name — from Horatio Brooks, the city’s first mayor and leader of Brooks Locomotive.

They also talked about the importance of having that facility right in the heart of the city.

Council members later that evening passed a resolution announcing their opposition as well, with the comments from the community. But since that day and meeting, city officials have been silent on Brooks and its plans to relocate — until last month.

Almost coinciding with the hospital’s announcement to build at the former Cornell Cooperative Extension land in the village of Fredonia, Dunkirk resident Frank Beach came forward with a petition requesting the facility stay in the city. Beach, to his credit, has done more than any current elected official in bringing attention to the plight.

He’s banging a drum on an issue that could have been a much more orchestrated community effort 16 months ago when the Pomfret site was chosen. For some reason during that time, however, people stopped caring about the proposed relocation — or just did not think it was worth the fight.

There are, however, bigger battles than just the move. Chris Lanski, Brooks-TLC board chair, made a remark earlier this month in an interview with the OBSERVER about just how tenuous the current situation is. “The prize is really having local health care,” he said. “The community thinks that it’s a right and what we’re finding is it isn’t a right. It’s something we have to work really hard and fight for and if we’re not in a position to take on the changes … we wouldn’t exist.”

How residents are so upset with the funding is almost hypocritical. They rarely protest a grant of any type that keeps our municipalities afloat.

When it comes to education, voters here — for more than a decade — have rarely voted “no” to the many school projects, especially for rinky-dink districts with declining enrollments to enhance gymnasiums, turf fields or auditoriums. Those construction funds, we are so often reminded by the boards, come heavily from New York state coffers.

Since 2007 when Dunkirk residents approved a number of improvements to its school buildings, this area has benefited from more than $80 million in state funding for improvements from Silver Creek to Westfield. No one protests that money because it fortifies a status quo that many of us are all too comfortable with: high-taxing and inefficient school districts with declining enrollments.

But we protest the opportunity for the state-of-the-art hospital due to one thing: fear of change. The argument that Dunkirk will suffer economically from the facility’s exit is downright false. Central Avenue is almost at rock bottom, mainly due to the Masonic Temple fire nine years ago. It has nothing to do with the health-care facility on the 600 block.

Another protest is set to take place this morning in front of the State University at Fredonia incubator at 214 Central Ave., the same location where hospital officials are meeting with community members to explain the project. For all intents and purposes, these protests — being led by Beach and Councilman Don Williams Jr. — are a bit disingenuous.

Williams, an incumbent, is part of Dunkirk’s sloth attitude on the hospital move. He has said or done nothing for the previous 15 months. Beach, who is working to get his name out, has his sights set on a council position. Simply put, these demonstrations are about garnering votes in November — not what’s best for our communities.

Today, that power plant our community tried so desperately to keep in operation, is desolate. Brooks is in an even more dire position financially and needs saving as well.

A new hospital is an opportunity for a new beginning. If we’re not careful, and keep dragging our feet, it also could be another in the long lines of bitter closings.