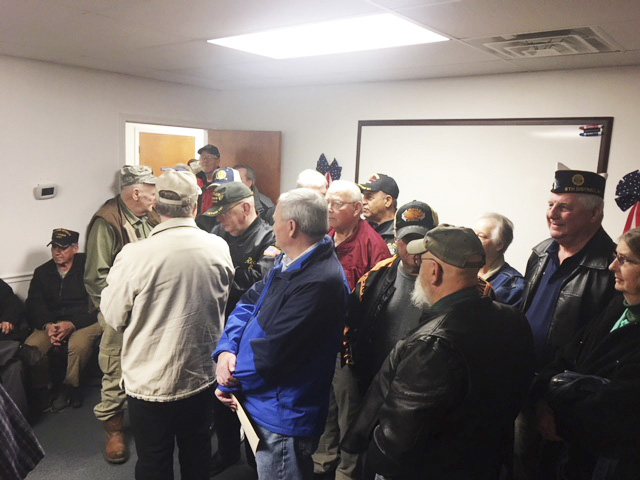 About 35-area Vietnam veterans filled a room of the VA Clinic on Wednesday in Dunkirk.

Vietnam veteran John Miga remembers coming home to what appeared to be an ungrateful United States after serving his country. Miga, a Dunkirk resident who currently serves as the Eighth District Commander of the American Legion, reflected on those moments from the 1970s during Wednesday’s Commemoration of the 50th anniversary of the Vietnam War.

“We were all shunned when we came back,” he said at the VA Clinic at 166 E. Fourth St. in Dunkirk during the afternoon ceremony honoring the soldiers. “It has taken this long, but finally it’s here.”

Miga and the 35 other Vietnam veterans in attendance experienced something their parents and many other U.S. military members had not: a fear of admitting service to their country. It was a time when U.S. citizens were divided regarding the country’s involvement overseas in a fight against Communism.

While millions of men were drafted and fought across the Pacific Ocean, the scene in their homeland was a whole other battlefield.

What made this effort so much more different than World War II or Korea was television. For the first time, Americans were able to view scenes of combat through the nightly news reports.

Many in their homes, however, did not like or approve of what they were seeing. It led to calls for peace, plenty of unrest, rallies and, at Kent State University in Ohio, death.

Somehow, in all the debate and chaos, many Americans at home had turned against those who had little choice when Uncle Sam came calling: the U.S. soldiers. Those who arrived home after their tour of duty were told to take off their uniform and to not mention what they had been through.

Terry McGuire, spokesman for the VA Clinic, was aware of the bitter sentiments these men faced. Before reciting President Donald Trump’s proclamation he told the group their experiences, as unfair as they were, can help in the healing process for a number of military participants who have returned home.

Trump’s proclamation also noted exactly what Miga referenced toward the beginning of the event, which was a disrespecting and uncaring public. “We vow to never again confuse personal disapproval of war with prejudice against those who honorably wear the uniform of our Armed Forces,” Trump wrote. “With conviction, our Nation pledges our enduring respect, our continuing care and our everlasting commitment to Vietnam veterans.”

With the proclamation read, the men — and a woman — came forward to receive a copy of the document as well as lapel pins in their honor. Some of those area residents in attendance included: Cliff Murphy, Carter Town, Michael Edwards, Jonathan Myers, Dave Sheldon, Dan Salerno, Walter Sedlmayer, Anthony Borrello, Robert Halsey, Leonard Graves and Sandra Tapasto.

Numerous other veterans, who missed the ceremony, can receive recognition at the VA Clinic in Jamestown at 608 W. Third St. at 9 this morning or the Allegany American Legion Post 892 at 4350 state Route 417 in Knapp Creek.

Miga, in the end, was touched by the honors. “It’s disheartening when you go through it,” he said, “but it’s uplifting when you finally get the recognition we all really deserve.”